Del is one of the elk killinest dudes I know. He has killed elk in just about every way, except by utilizing patience. Del usually runs along side the elk until the elk gets tired, and then shoots them. No, but seriously, he's got a pair of legs on him, and he uses those legs!

The first time Del and I hunted together we found ourselves in the middle of elk mecca. Elk and Del were running all over the place. He passed up a small bull or two that day. I was laughing at the utter madness unfolding in front of my eyes. Del then told me what his plan was over the next two days. I smiled and said "Have fun!". He knows no physical limits. In a four day hunt Del survives on a couple of tortillas and less water than a camel. He is just one of those kinds of guys.

Del has let up on his trophy hunting ways over the past few years. It used to be that the small bulls were not worth his time. He usually lets them walk because he doesn't like ending his season so soon. This year, with a wedding to attend in Italy, he wasn't going to pass up anything. A wedding in September is NOT COOL for an elk hunter, regardless of whether or not it is in Italy.

So I asked Del to write me a story this year. Here it is, in his words:


The Short Season: By Del Jolly 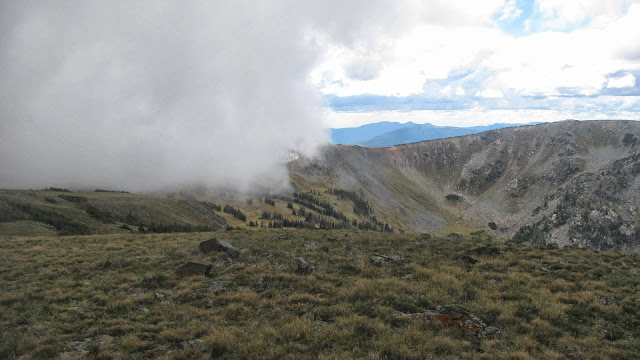 2013 proved to be a very interesting Elk season for me and many of my Elk hunting friends. I think Tommy's earlier assessment hit the nail on the head...the opener had some of the best bugling I've ever heard.

This year I was very focused on the elk season. Three years ago, Tommy, Danny and I shot daily for months leading up to the season, it was no surprise that each of us were successful that year. I am a true believer that elk season starts well before August. But life gets very busy at times. Still, I believe in starting my preparation months before the season to increase my chances of being successful.

Last year I got so busy with “life” that elk season wasn't a priority. It was the first year in my life that I didn't even shoot at an elk. I believe that it had a lot to do with the fact that I didn't train and I didn't shoot, all I did to prepare was basically schedule my hunt. I vowed that this year would be different. I shot as much as I did three years ago (the year that the Clums and I all killed elk). I worked out, and dreamed of elk both day and night. I was very excited, but more importantly, prepared for the opener.

Usually I pack in with the llamas, but this year I didn't want to be held back by anything, I would go where the elk took me. I planned on hunting with Kelly on opening day. Our only plan was to hunt the first morning together and then see what the situation looked like. We would either stick together if that seemed right, or go our separate ways and see each other at the truck in five days. However, as bad luck for Kelly would have it, he got ill the day we were to leave. It was unfortunate for him, but didn't weigh too heavy on me when I left 5 minutes after the call.

When I got to the trailhead I had to wait for a rain storm to pass before I could start. I’m sure that is a reoccurring theme for many of us Coloradans this year. Once the storm broke I was late, but on my way nonetheless. About a mile into my journey the elk started bugling, completely ruining my "plans" on where I was to camp that night. I was bushwhacking and decided to sleep right where I was rather than risk spooking any elk. Bugles popped off throughout the valley as I set up my tent and crawled in for the night. I've always thought of these kinds of nights as Christmas Eve for adults.

I woke to a bugling bull, though he was fairly far away. I instantly packed my stuff and ran up the mountain. Each time I’d think I was closing in on the bull he would bugle further away, and as we all do, I continued to go after him. He dragged me all the way up some pretty rough country and into another drainage where we frequently see elk. He was going down the other drainage and getting further away by the minute. I decided to leave him be and see if I could strike up anything else.

This year I brought a Montana Decoy. I wanted to try something new for me...setting up and calling as opposed to running down the elk. So at the top of the drainage I set up the decoy and began cow calling. Immediately a cow answered, followed shortly by another bull. I caught sight of a small bull running through an open valley about 500 yards away. I could tell he was a young bull by his eagerness to come see me. I set up about 15 yards in front of my decoy on a steep slope then called and waited. Very soon I saw a cow coming up the hill about 60 yards away. A small 5X5 was right behind her. I always like when cows lead because it gives me an opportunity to see what the bull might do.

At one point I had a fairly straight down shot at the bull, but it appeared that the cow was going to bring him to a better shooting lane, so I waited. The bull was following the cow as she passed through my shooting lane. I knew right where I was going to draw, and was already preparing my mind because this bull was certainly going to run waaaay down hill before he died. But as his luck would have it, just before I drew, the bull stopped, got that nervous look in his eye and started backing up. In the corner of my eye I saw the decoy swaying back and forth in the breeze. The bull looked right at me and bolted.

The next morning I woke to three bulls bugling back and forth. One was within a hundred yards of my tent, so I decided to leave the tent and go after the bull. This elk had a great bugle and I could see he had cows. As I tried to slip under him the wind changed and the entire herd busted out. It was disappointing to go from tons of action to none with one quick breeze.


This is the area I had the best action. There are big drainages to the left and right of the picture. You can see how easy it would be to have a straight down shot with how cliffy this area is. 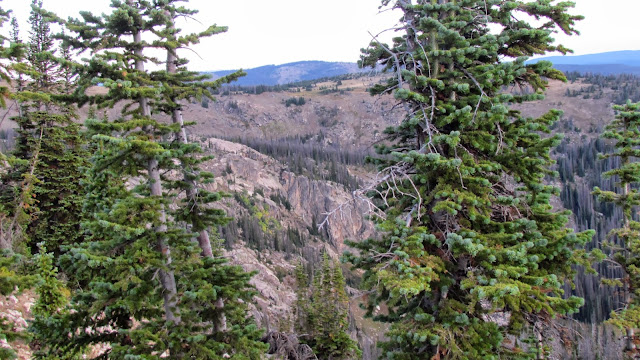 Before I packed my tent and headed for further pastures I through a bugle down a drainage. I immediately got a response. I decided to quickly run back to my tent and pack my gear before chasing this elk. When I got back and called again I got no response. Usually I cover tons of ground until I slop into something, but this day I decided to implement a more technical approach. I sat, for the very first time in my nine year elk hunting career, and cow called and waited. I'd wait 5 minutes, cow call again, and wait longer.

When I had just about exhausted my patience (10 minutes later), I heard a pop behind me. I was sitting on my but with my heavy day pack. I could see elk legs coming my way. It took about all I had to get to my knees quietly with that heavy pack. It was fairly dense where I was. The elk was coming from my left, so I turned my head to the right and gave three soft mews. I wanted to create just a little bit more excitement since I knew that I wouldn't be able to call again (I was using an open reed cow call that required me to move my hand).

The small bull bit. He was below me and moving from left to right. I looked ahead of his path and there was only one small shooting lane. I knew that I needed to stop the bull there or it wouldn't happen. I came to full draw as the bull was walking through the lane. I mewed with my voice and the bull stopped right where I needed. him to. I let the arrow fly. It seemed to zip right through the elk. He turned and bolted down the hill. I called to stop him, it was too dense to see him so I listened intently. A few minutes later I heard a crash. And then it sounded like he got up and ran further.


My bow tip is pointing to the exact spot the elk was standing when I shot him. I had a very narrow gap between those two trees, but with all the shooting and preparation I did this year I was 100% confident in my ability to make the shot. 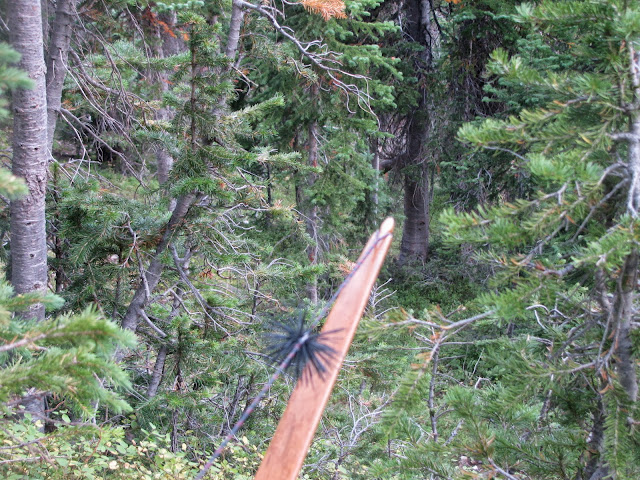 I waited for an hour. When I started to track him I found good blood right away. My arrow was about ten yards from where I had shot him. I followed the blood trail for about 100 yards and reached a point where I could see no more. I stood there trying to figure out what to do. Should I wait longer or continue to sneak along the faint trail? As I stood there contemplating my next move I looked to the right and saw the bull piled up.


The majority of the blood trail looked like this. Lots of blood on both sides of the trail. 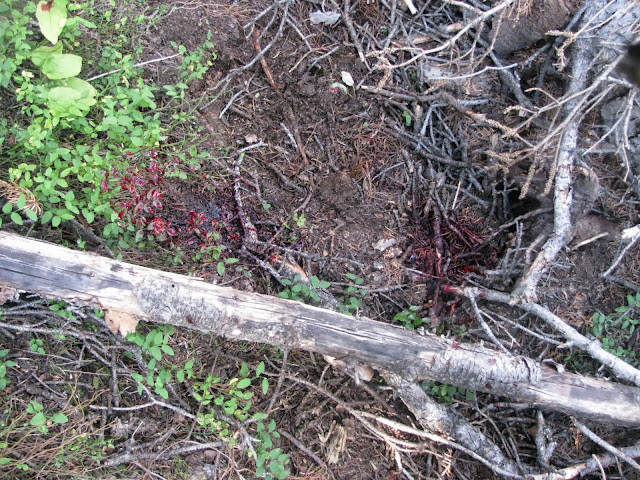 This is exactly what I saw when I was trying to figure out my next move. Did you see the bull right away? 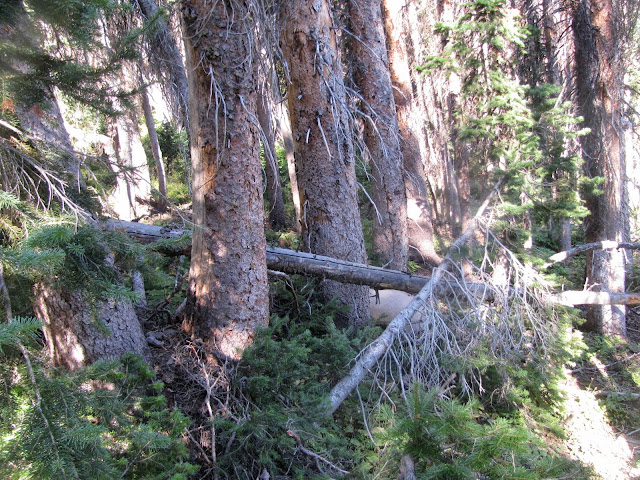 It was very exciting to finally bring it all together. Even though it was only the second morning, it had seemed like I had been elk hunting for months. This was the first time I killed an elk when I wasn't camping with anybody. That meant I’d be packing it out by myself. It took me two days and three trips. 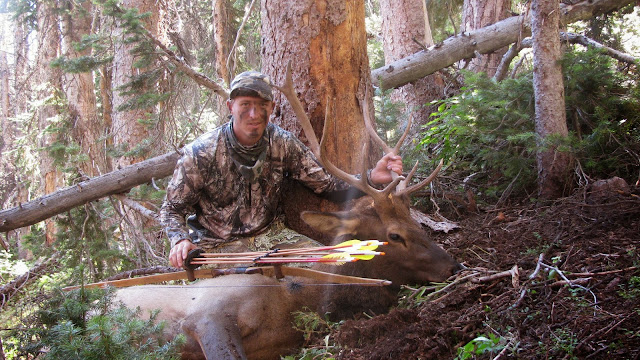 I used a Spirit Longbow, 48@28. My draw length is 31". I used Carbon Express Heritage arrows with a 175gr VPA Terminator broadhead. My arrow passed completely through the bull, and he left a 100 yard long, heavy bloodtrail.

The Clum's taught me how to butcher my own meat, so I spent an evening with my wife and kids butchering the elk ourselves. 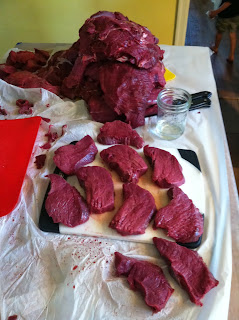 It was tough to be content in town since my season ended so early and I trained so long. I went back up a couple weeks later with a cow tag in my pocket just to sit under a tarp in brutal rain for three days. But sitting under a tarp in the Rocky Mountains with a punched bull tag isn't that bad.
Email ThisBlogThis!Share to TwitterShare to FacebookShare to Pinterest