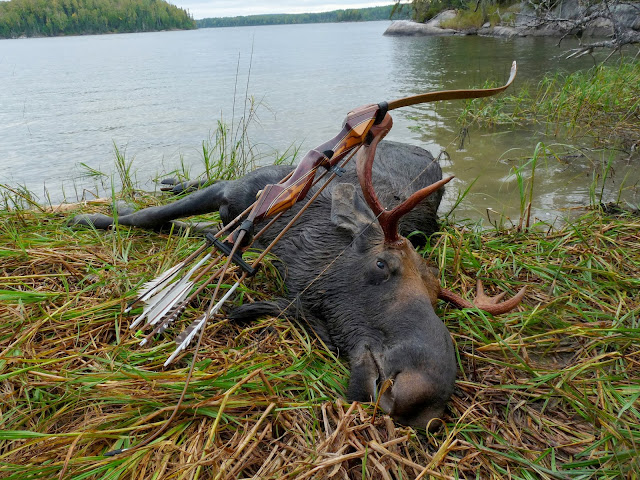 The Silver Fox (Dad) had to show us how it was done in Ontario this year. Good thing he spent a lot of time practicing his 50+ yard shots at the range this year. It really paid off...more later.

Running this archery store with my Dad and brother is really fantastic. The people that I get to interact with everyday, the conversations I get to have, the non-stop hunting stories. I don't have a complaint in life. I really have it too good. The only bummer is that the three of us do not get to hunt together very often. In the past ten years we have taken only a small handful of trips, all together. Somebody usually needs to man the fort.

This year was different. We have some excellent people helping us in the store right now, so we grabbed our wives, girlfriends, kids, bows and arrows and fishing poles and headed to Ontario. Some families take cruise vacations, we go on hunting/fishing trips.

We headed back to Wine Lake to hunt with Herb Pugmire. His operation is set up perfect for families. It is a first class camp that is completely affordable for average folks with some planning. Two years ago my brother killed a great moose here at Wine Lake, I wrote a story about it here. Following are some pictures of our trip, some of the fish we caught, the wildlife we saw, and a moose hunting story.

My son, John, telling me about moose hunting. 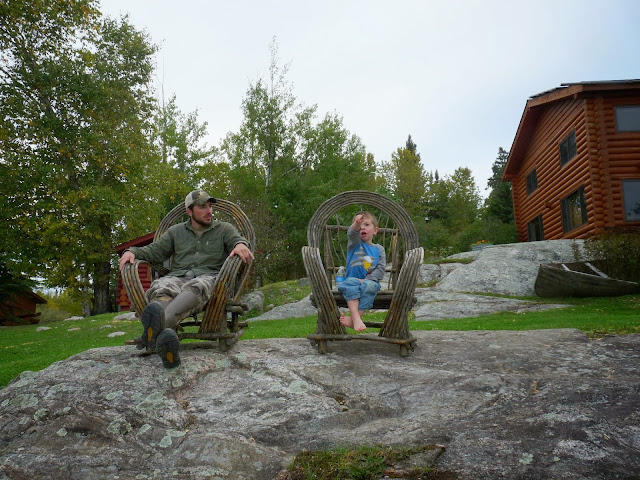 Bald eagles are plentiful in Ontario. This guy sat with his catch as we cruised by. 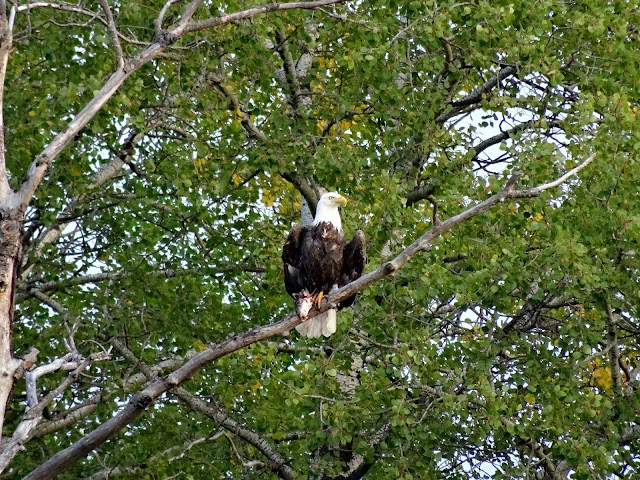 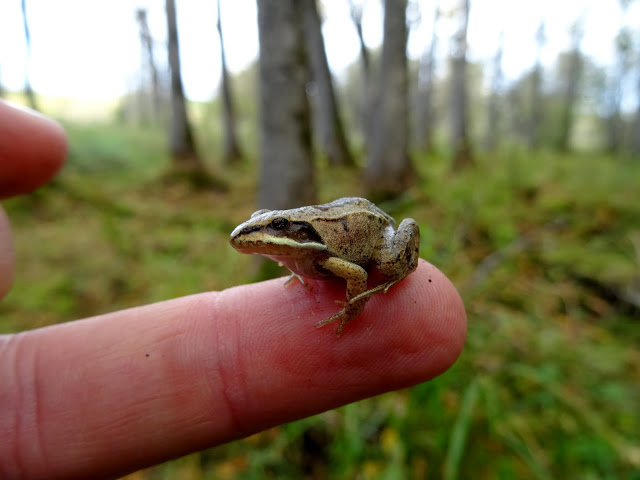 I caught this little frog as Danny and I were working our way into a calling position. We sat for twenty minutes, calling intermittently. As I was taking pictures of this little frog a bull moose starting tearing up the forest right behind us. I forgot about that frog real quick, and though that bull was within 50 yards I never did see him through the thick woods. I'm not sure how a bull moose vanishes in the forest without being seen or heard. Apparently he wanted to let us know he was there, but that was it.

My Mom loves the outdoors, she had a great time and hammered the fish. 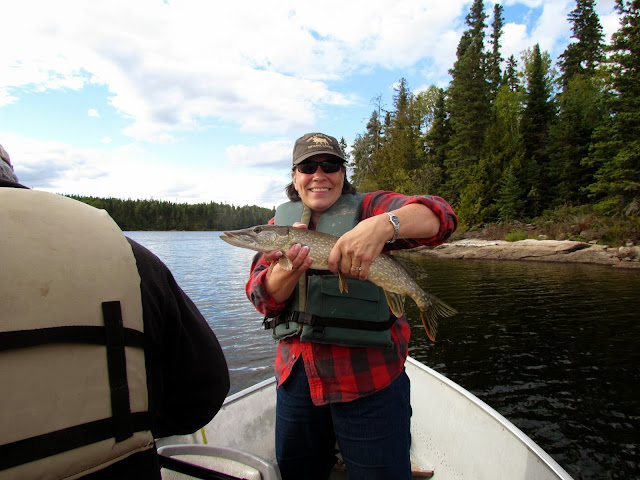 John isn't quite old enough to reel in the fish by himself, but he sure loves being there. 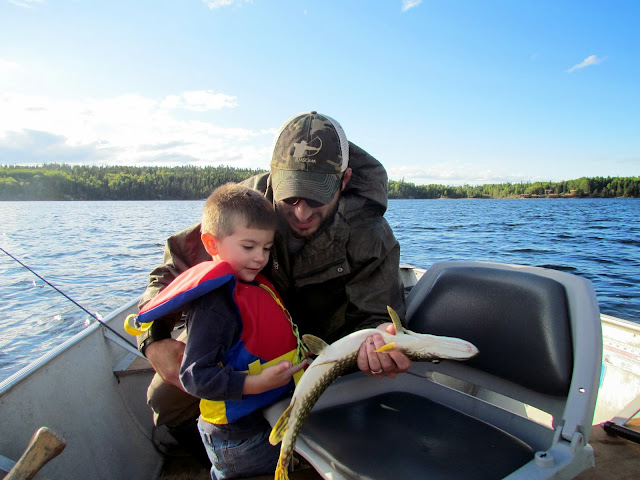 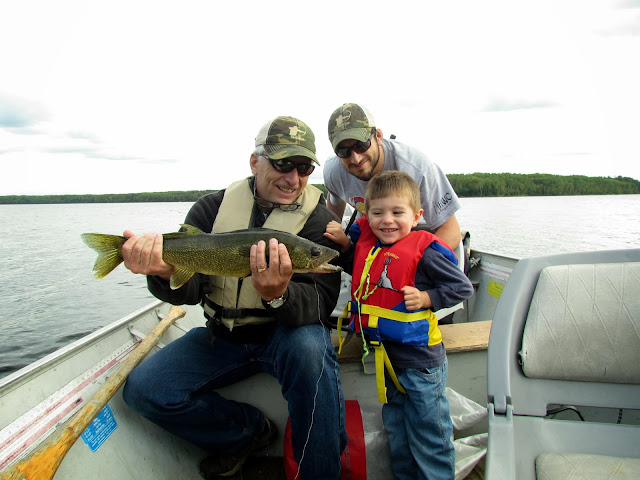 The past two times I have been to Wine Lake I have had a goal of catching a 40" pike. I got close in the past, but this year I finally got one. He was 40" on the nose, not 1/8" over. Mission accomplished! 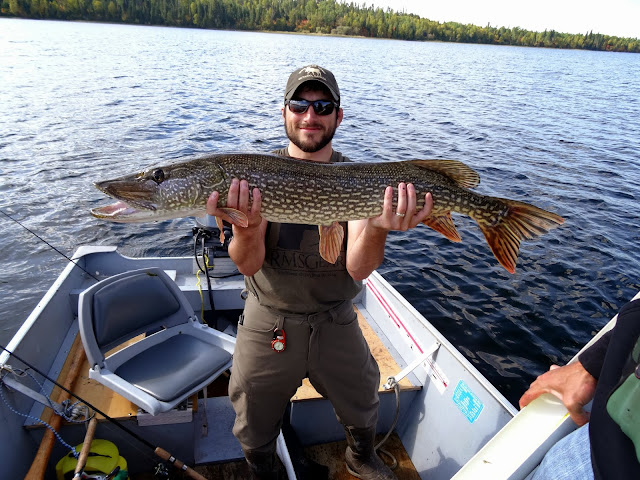 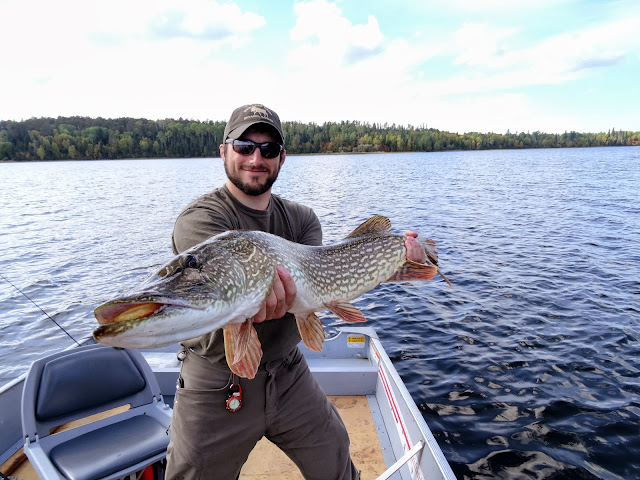 The sunrises and sunsets on the lake were truly something to behold. 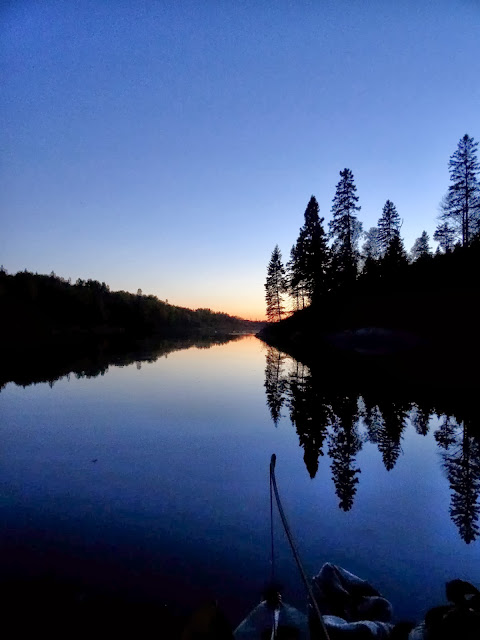 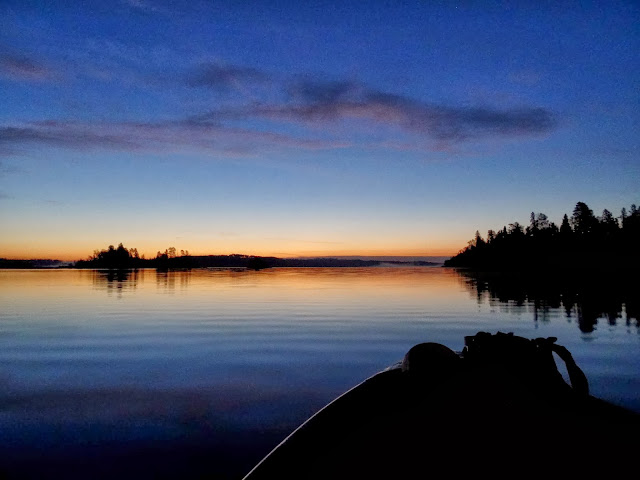 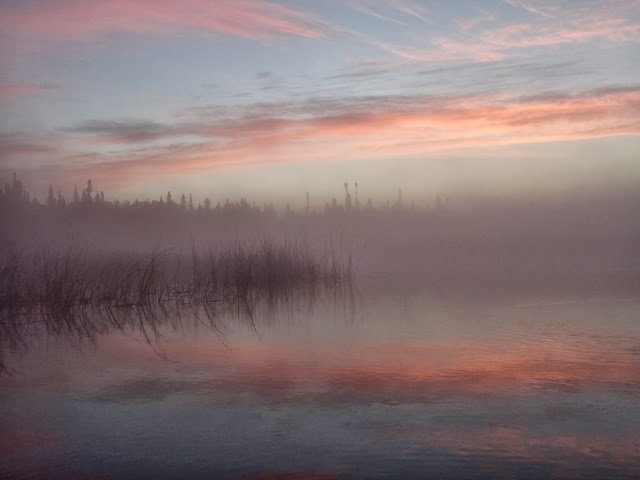 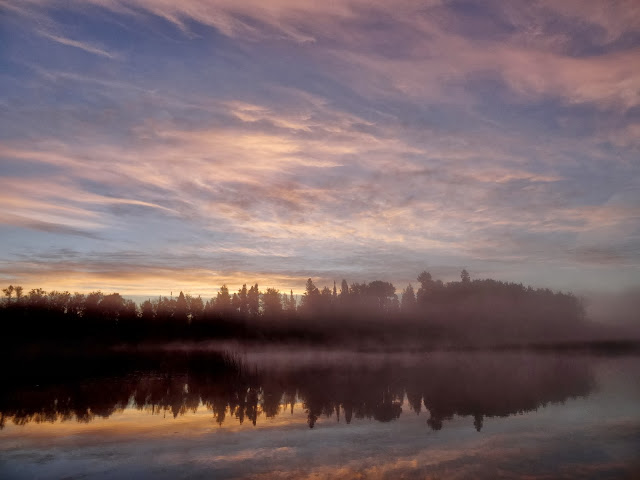 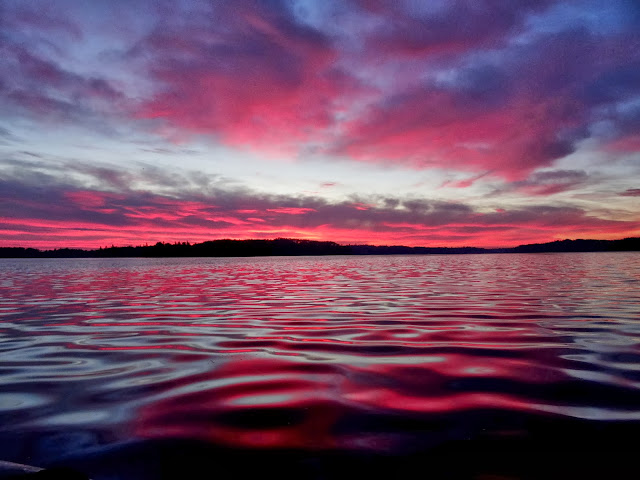 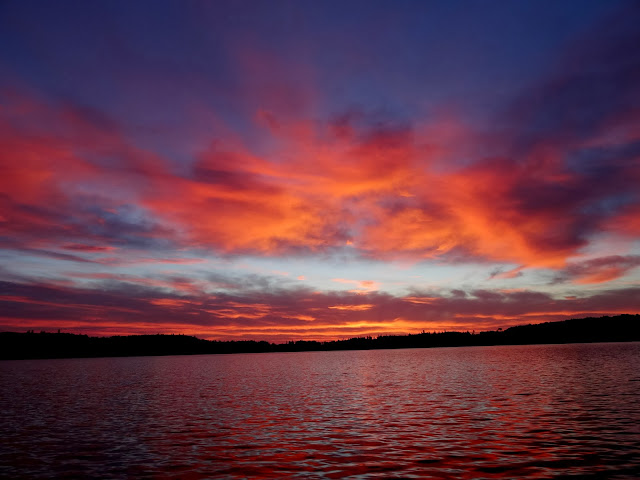 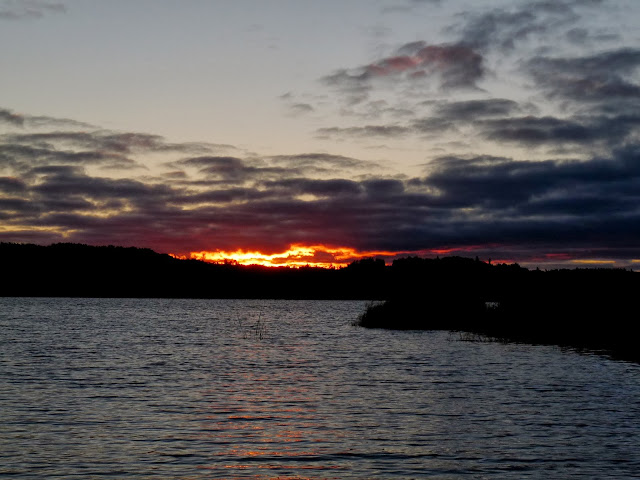 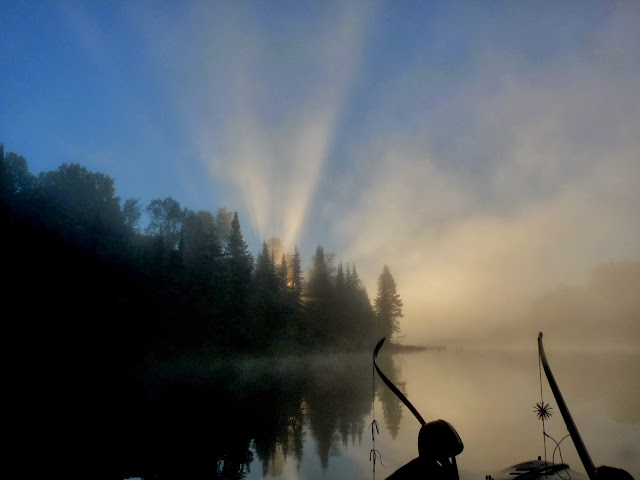 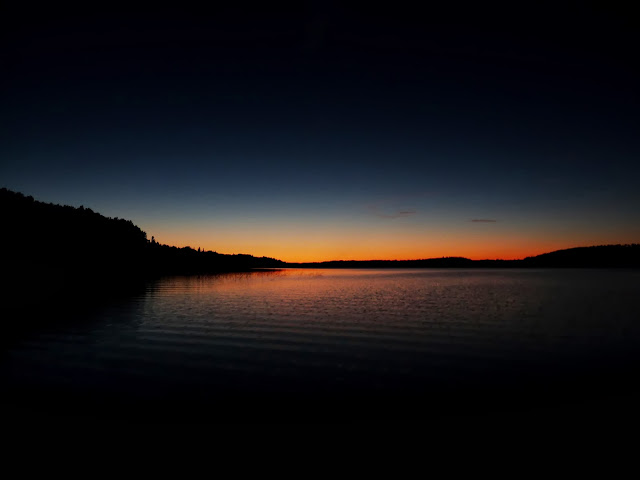 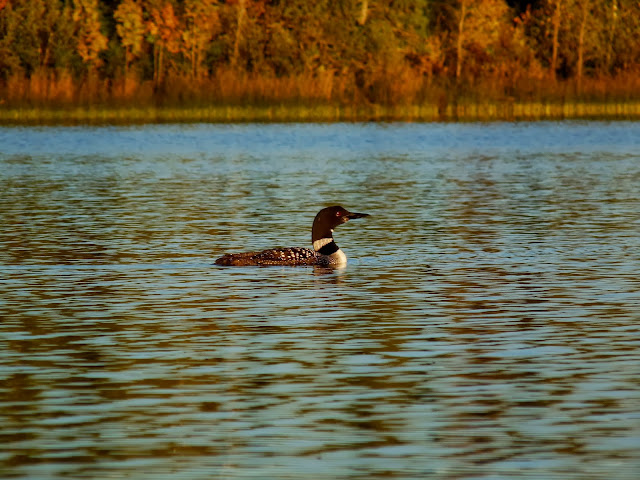 Alright, let's get to the good stuff! The moose hunting this year was a bit slower than past years. I would assume that it had something to do with the fact that the lows were in the upper 50's and the moon was full right in the middle of our hunt. We also experienced super high winds, which made hearing anything all the tougher. We changed our tactics to accommodate the conditions. Instead of sitting in once place and doing a lot of calling we moved a lot more and tried to spot something.

The forest is all but impenetrable. Walking around is really not an option. Our strategy was to locate a moose from the boat, either with our eyes or our ears, and then get on the shore and try to call the moose to us.

This cow was out feeding at 2pm. 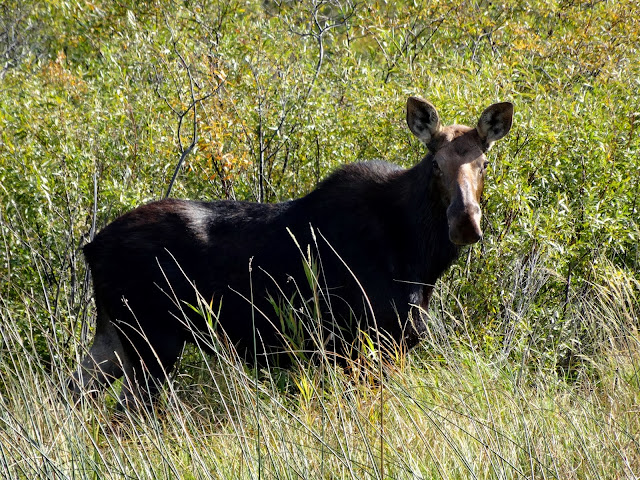 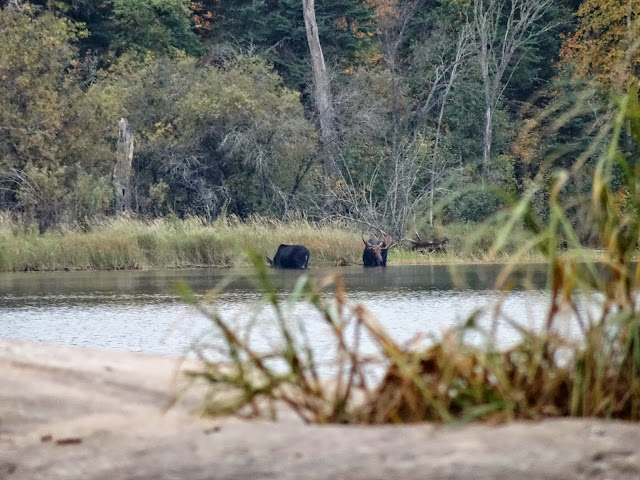 This bull and cow fed in place for a long time. We positioned ourselves on shore a couple hundred yards away and worked towards them as quietly as we could. We made it to within shooting range but a shot never presented itself. Calling to this bull proved ineffective. 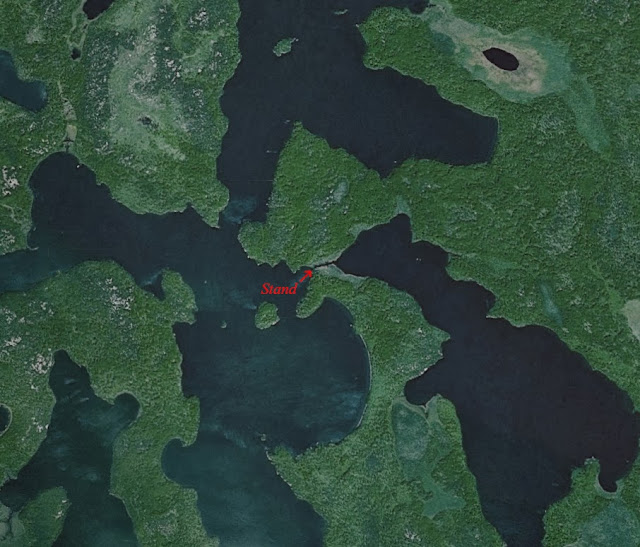 Herb built a small platform near a moose crossing shown in the picture above. Bulls pass through this crossing every couple of days as they are on the prowl. You can see why, it's a perfect funnel for traveling bulls. Herb insisted that we split up our time and keep a guy on this stand. It's really not much of a stand, the platform only sits about 10 feet off the ground, barely above eye level with these long legged moose.

On Dad's second sit a young bull moose showed some interest in his calling. Dad called only loud enough so that the bull could hear him. And only often enough to keep the bull's interest. Bull moose can take their time coming to a cow call. At one point the little bull lost interest and starting walking away. Dad turned around and called facing away from the moose, to try and sound further away. The small bull turned on a dime, and finally committed to checking out this cow he was hearing.

The moose was coming strong, grunting with every step. When he was twenty yards away the moose had two options, walk around a willow bush and offer my Dad a 20 yard shot, or come straight to him. As luck had it, the bull walked straight to him.

When the bull was a measly five steps away, and practically eye level, my Dad slowly drew back his bow. As the moose walked by his tree, not even three yards away, Dad let go of the string. He could have jumped on the moose's back just as easily. Dad thought that the shot placement was perfect, and was 100% confident that the moose would be no further than 100 yards away. What he didn't know at the time was that his arrow glanced off of the moose's rib, angled down and back, and only caught one lung and part of the liver.

Danny and I were hunting in another location, and Dad was a couple mile boat ride from camp with no boat. So when Danny and I came to pick him up, several hours later, we were surprised to see him sitting on the shore reading a book. We figured that he was just enjoying his vacation and glanced at each other with that look that said, "Come on Dad, stay on the freakin' stand!".

As we pulled the boat up I saw that grin that people make when they are trying to hide a smile (crudely referred to as a $#!& eater). I got pretty excited, knowing what that face meant.

What was supposed to be a real short blood trail got a little longer than we were comfortable with. We backed out and went fishing for a few hours before continuing the search, just to play it safe. We grabbed Herb to help retrieve the bull.

Herb has been there, done that. He had a strong hunch on where the bull may have gone, and sure enough, he drove the boat right to it. The bull went to water to lay down, and died there right next to the shore. We drove right past him at least three times and never even thought of looking for him there. The four of us dragged him on shore, snapped a few pictures, and then got to work. 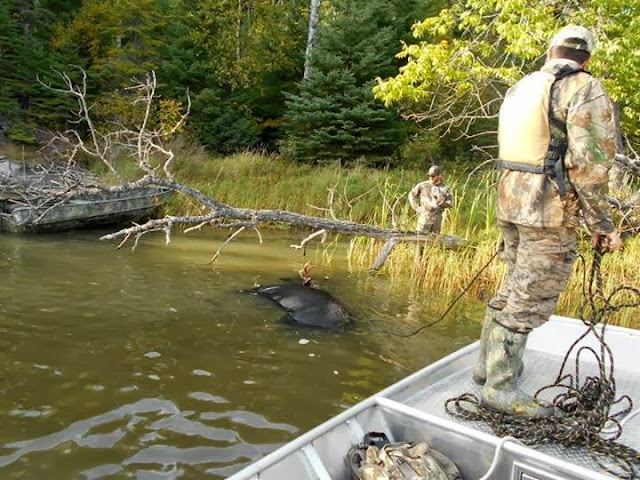 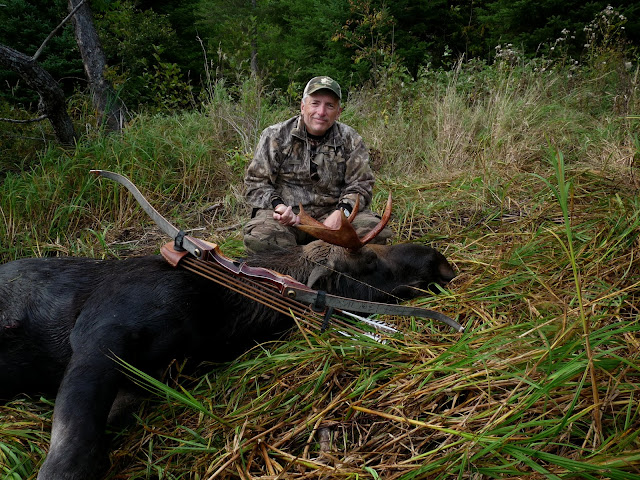 Dad killed this moose with a Hummingbird recurve - 53@28, 62" He used a Carbon Express Heritage arrow and 200gr VPA Terminator broadhead. 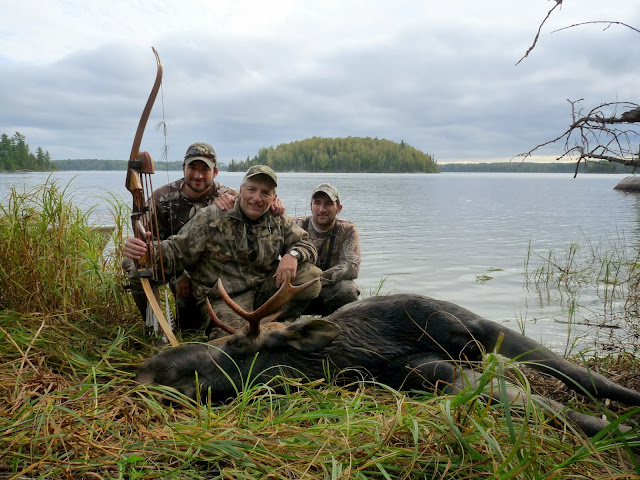 This Randall knife was a conditional gift to my Dad from a good customer. The condition: it had to be used. 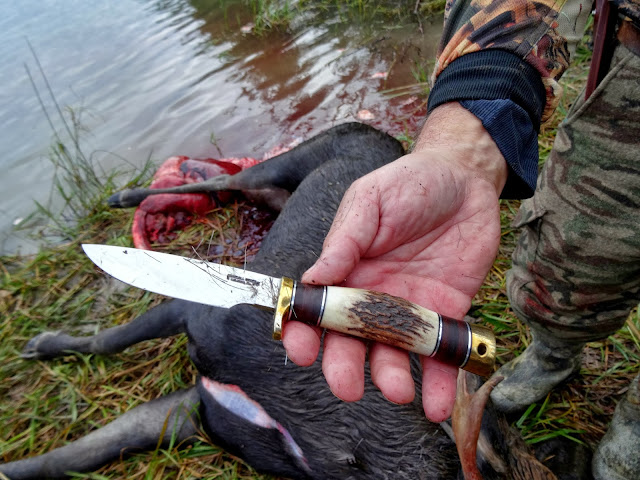 Since the moose died right in the water and we could drive the boat to him I went back to camp to get the girls and the kids. I knew my son, John, would really love to see the moose. Plus, the girls wanted to see how we cut up this giant animal.

I love this picture, my wife and Danny's girlfriend grimaced a few times. Personally, I would gut fifteen moose over changing one dirty diaper. My wife on the other hand, she'll take the diaper. 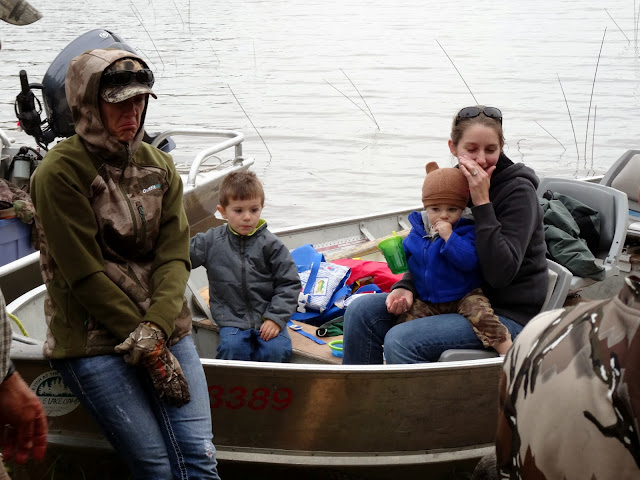 My Dad, my boy, and me (below). When it comes to important things in life hunting is pretty far down on the list. There are a lot of areas in life that are more important than trying to kill animals. However, there are not many things that bond fathers and sons like spending time in the woods together. What other activities make young men excited to spend time with their dads, from the time they are a kid, through being a teenager, and then as adults? Long car rides to hunting destinations provide many hours of one-on-one conversations. Sitting on a mountain, or in a boat, or even on a cabin porch, while witnessing The Creation first hand, implants memories and discussions quite deep. And if nothing else, hunting provides an excellent excuse to be with one another. My Dad used hunting with my brother and me to create strong bonds, good memories, and provide the opportunity for meaningful and important conversations. I plan on doing the same thing with my sons. This is hunting memory #1 with my son. Many, many more to follow. 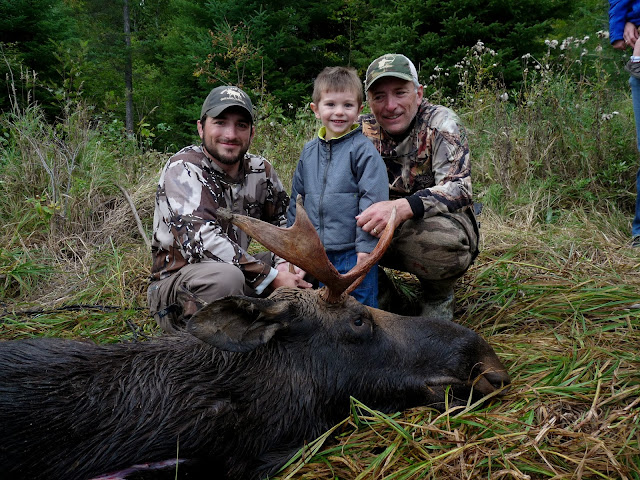