Well I finally got the turkey videos from opening weekend up on YouTube.

Lets take a look at these shots, and I will offer my comments on the shot placement and the effects of each shot.

Let me start by saying that it is extremely difficult to guarantee shot placement on an animal this small, and one that moves around as much as turkeys do. For this reason I shoot the largest broadhead that I can get to fly well. Because the chances are high that an arrow will go through non-vital portions of the turkey, I want to cause as much damage as possible to create as quick of a death as possible. It's not like turkeys are large birds, so a large broadhead does a lot of damage. But at the same time they can be incredibly difficult to kill. My experience has led me to become a firm, firm believer in LARGE broadheads for turkeys.

We'll start with the turkey that I killed on opening morning. Watch the video first and then we'll discuss the outcome.

The turkey died at the spot last seen in the video. 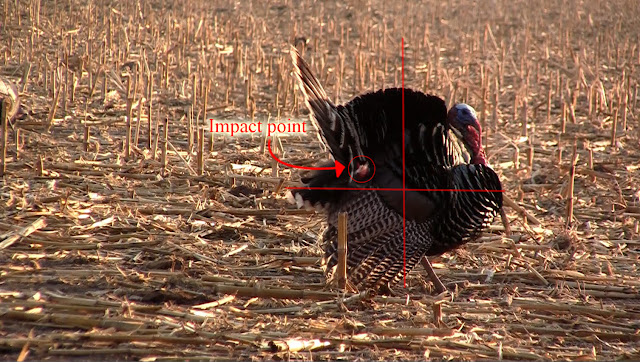 You can see that I missed by shooting higher and to the left of where I would ideally like to shoot.

Having seen several turkeys shot in this exact same place I knew that this turkey would not go too far. You can see the damage done to the turkeys leg by the way he was walking. It would have been difficult or impossible for him to fly away.

I was shooting an extremely wide four bladed broadhead. The bloodtrail from the spot of the shot to where the turkey died would make any deer hunter happy. You can even see the blood pumping out of him in the video. So, while I don't recommend this spot to shoot a turkey in, I have seen it be quite lethal, several different times.

Next lets take a look at the turkey my Dad shot.

This turkey required a follow up arrow a short time after the initial shot. 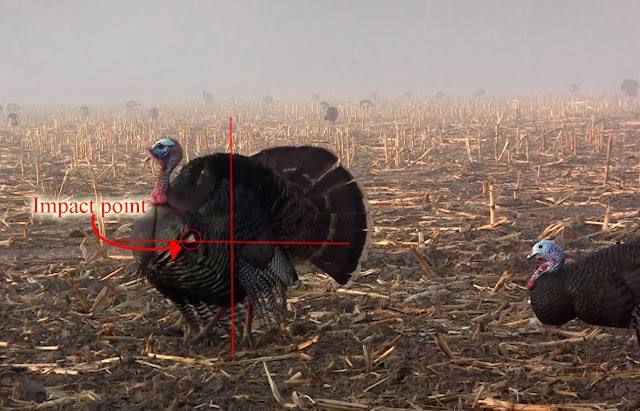 This was a breast shot and did not pass through any vitals. The shot should have been further back, towards the intersection drawn.

We knew right away that it would require some time to recover this turkey. Lucky for us he stayed within our sight for the entire time. The turkey laid down on a hill, so Dad came up the back side of the hill, while I walked straight towards the turkey. He ran up the hill and Dad met him on the other side. The turkey was too weak to fly and had a hard time running.

I truly believe that if we had pursued this turkey right away we would have never gotten him. He would have had the strength to run or fly well out of our sight. Also, I think it helped that we were able to watch him for a long time and see where he laid down. Had he wanted to I am sure he could have covered quite a bit of ground before laying down.

All in all, I hate this spot to shoot a turkey, it usually leads to very difficult recoveries, and almost always requires a follow up shot. But sometimes you get lucky!

Now lets take a look at the turkey that Ashley shot.

As you can see Ashley made a great shot (third time's a charm!) and the turkey died on the spot. She completely took out the far leg and it was barely salvageable to eat.

I would also like to share my thoughts on shot placement, and my reasons why. I have been a part of around 50 turkeys shot with traditional archery gear and my opinions are based off of my observations from those experiences, as well as research I have done on my own.

I shoot at turkeys from any angle the shot presents itself, and I aim at the intersection of an imaginary line drawn straight up from the legs, and horizontal from just above the beard. Essentially this is the top of the hips for a broadside shot. I shoot here for two main reasons. One: I have a hard time picking a spot on a turkey, especially a tom in full strut. So looking straight up from the legs gives me a good reference to where his body actually is, and helps me zone in on a small aiming point. And Two: I have found that from any angle the turkey is standing, this intersection is very lethal, and kills the turkeys quite quickly.

Take a look at where I would aim at any one of these turkeys: 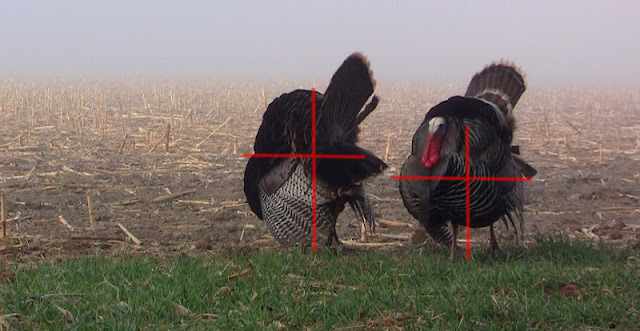 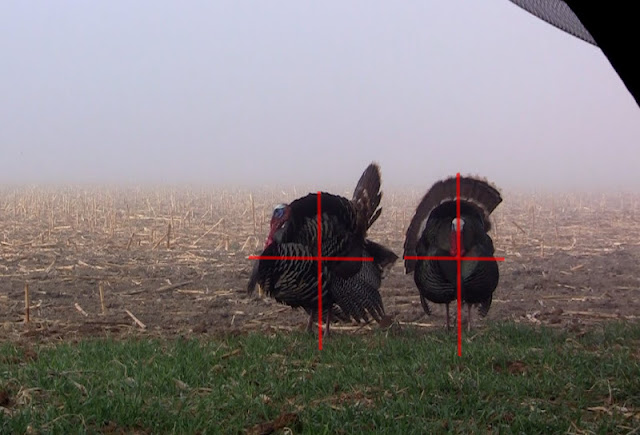 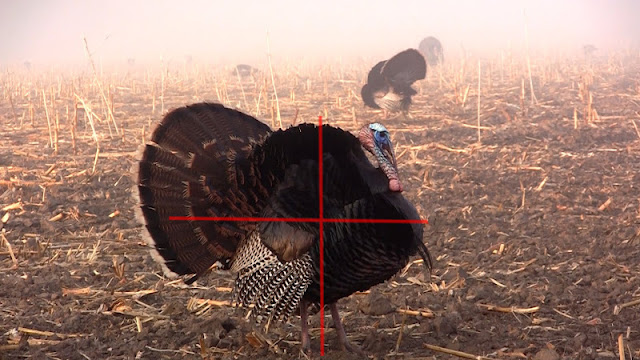 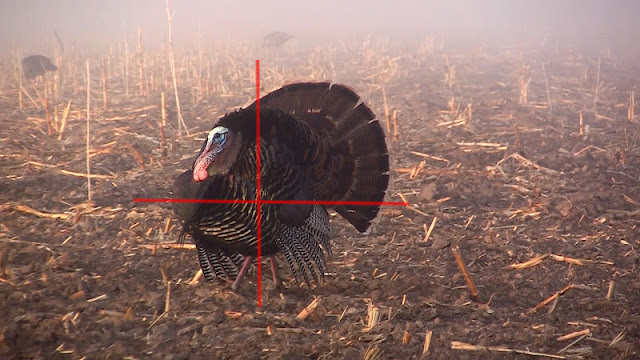 If I miss my aiming spot low or high I have a good chance of taking out the turkeys hips, and a turkey that cannot run very well cannot fly, so recovery is easier. A shot that is a little too far forward is still within the body of the bird, and a shot that is a little too far back will shoot through the guts of the bird and allow for an easy recovery. In two of the videos below you'll see shots that were both too far forward and too far back. Both turkeys were recovered without problem, one dying in sight, and one requiring a follow up shot (but the bird was too weak to fly).

I have lost too many turkeys over the years. However, since aiming for the birds hips, my success rate in killing turkeys has been 100% for the last few years. Losing a wounded bird can, unfortunately, be easy. A turkey that flies away is very hard to find, and they can hide as good as a pheasant. By taking out their hips I have seen a dramatic increase in the ease of recovering my own turkeys.

Hopefully I'll have some more videos later on this season! Check back in the next few weeks! 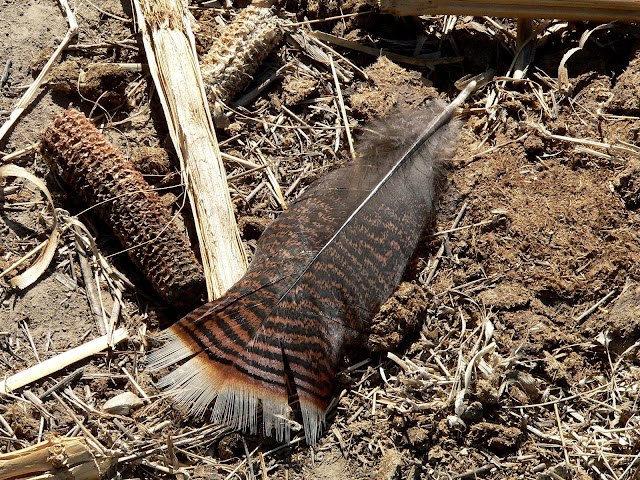 My first turkey hunt was over the last few days of March and the first few days of April in 1992. We had a great hunt and got in to birds left and right. At one point a big tom ran up and gobbled 5 yards away from me (that's a big deal to a 10 year old!). On the last day of the hunt, April 2nd, my 10th birthday, Dad and I hid under a big cedar tree and called a flock of turkeys right to us. My Dad shot his first turkey that day with a Bighorn recurve. What a birthday present for me! To say that I was excited wouldn't do it justice. I remember driving in the truck, looking at the stars, and telling my Dad that it was the best day of my life.

That recurve made it's way around the country to a few different states and in the hands of a few different owners. Earlier this year we got a call from a gentlemen in Arizona (I think) who said he had a recurve to sell to us. Well dang if it wasn't that same bow from 20 years ago. I had to have it, so I bought it myself, and vowed that I would kill a turkey with that bow this year.

After a great opening weekend in Nebraska we headed back out for round two. This time it was just my Dad, my Mom, and I. I really wanted my Mom to get a turkey, and it was just pure dumb luck that I ended up shooting one myself. I guess it was fate. 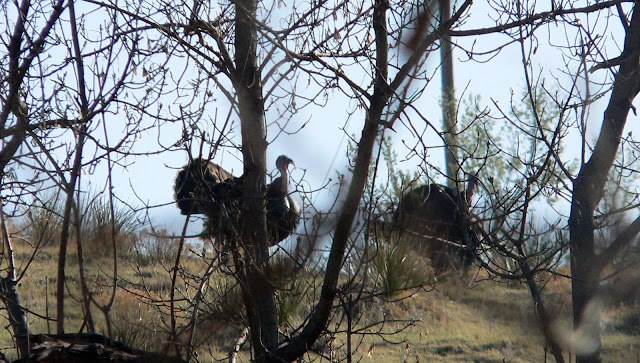 On this particular morning we had toms coming and going from a lot of different directions. A low pitched "vrooom" got all of our attention. My Mom had never heard a turkey drum before, so when I told her there were some turkeys behind us she thought I was crazy. But sure enough, three big gobblers were making their way down the hill behind us. 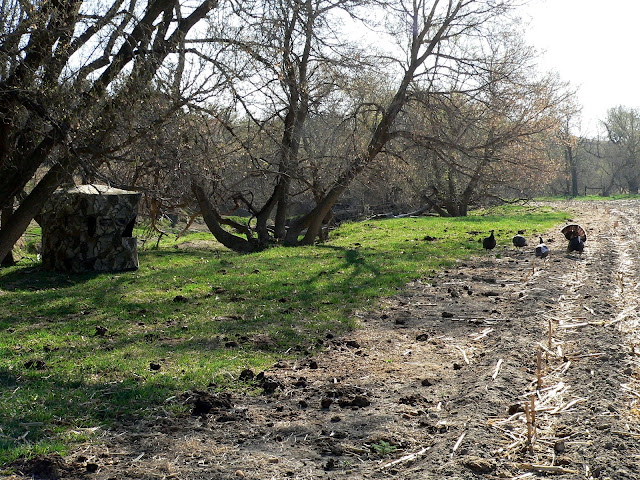 The turkeys made their way to the front of our blind and were approaching our decoys. My Mom had her bow ready to go! The toms were mere steps from walking in to the window of the blind and giving my mom a shot when they suddenly turned around. I couldn't take it, so I grabbed my bow while Dad dropped the side window on the blind. I pulled that 20 year old bow back and let fly a cedar arrow with a big Snuffer leading the way.

The shot was perfect, the turkey was facing away when I hit him. He flipped around, flew across a small creek, and died on the bank not five seconds after I shot him.

Just as I was watching him lay down I hear a put, turn around, and see that we have another big tom in our decoys. As I sat down mom got few shots off, but all she hit were feathers. Bummer! She has never shot a turkey with a recurve and it would have been something else to shoot a double with my Mom (how many people can say that?). 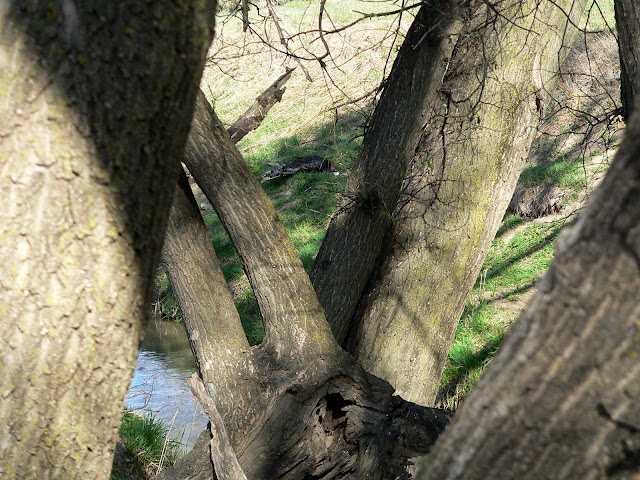 The turkey died on the bank, we could just see him through the trees from our blind. 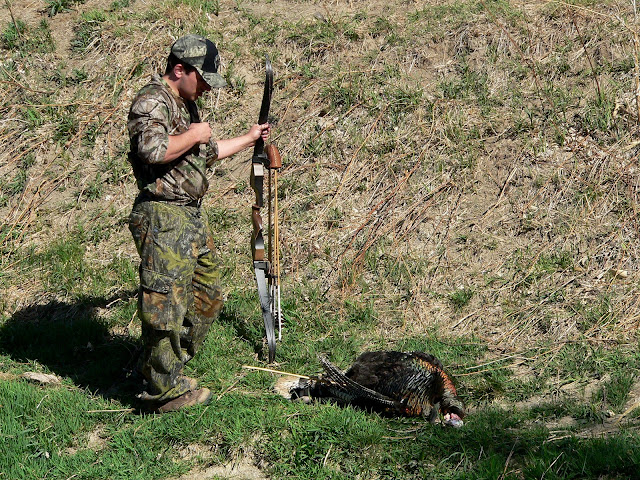 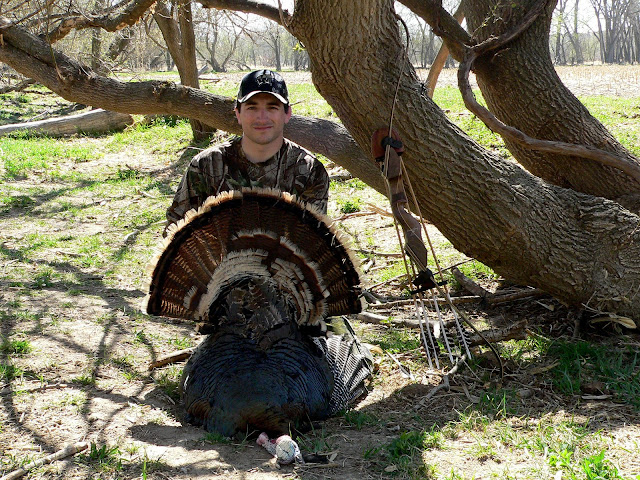 Quite a birthday present, both then, and now, 20 years later. 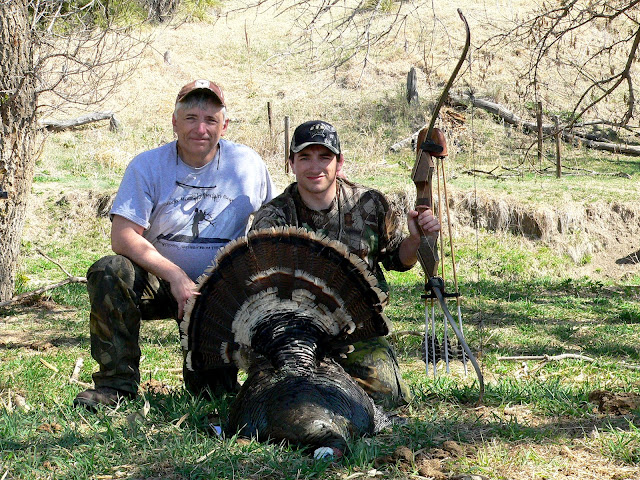 Dad and I had talked about doing this hunt for a few years now. What good luck that I was able to shoot the same bow that he did all those years ago. This time the bow is not leaving the family! 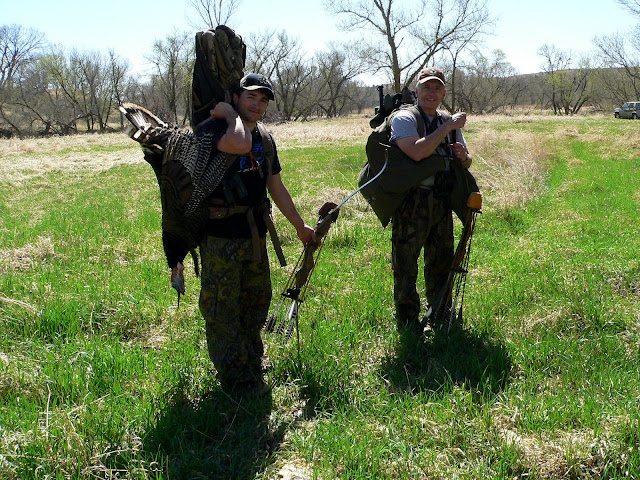 No better moments than walking back to the truck after a successful morning with my parents! I can not wait until I'm making these kinds of memories with my own son.