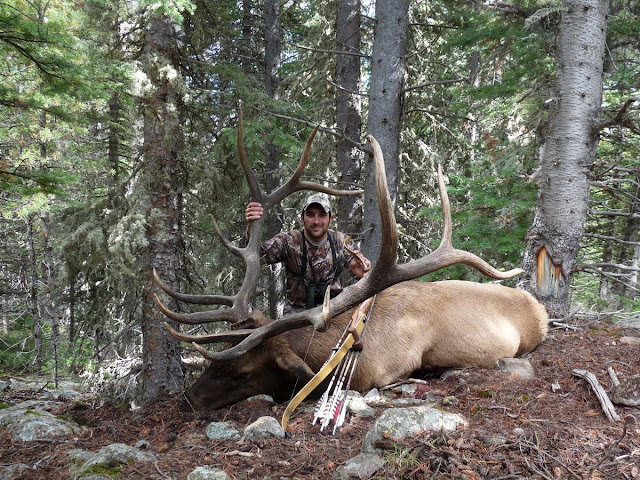 Ol' Danny boy really worked his butt off this season. He spent a ton of time scouting this summer. Exploring some rugged new country, and of course checking in on some old haunts. Danny did some fine hunting to get this bull, being his older brother it can be hard to admit that he's better than me at anything. I will say this, he is a better elk hunter.

Danny covered more ground this season than I could do in two. The way he shot this bull amazes me (this is an older brother talking here). It was something I would have never done. I simply wouldn't have had the confidence in the plan, or in my sneakability.

Danny has a handful of good but not great bulls under his belt. He is not a trophy hunter by any means, but with all of the great bulls he was seeing this year he was hoping for something with 6 points. Opening weekend Danny passed up on a few nice 5 points, bulls he would have shot in a heart beat any other season. Throughout the year Danny was at full draw on a few other nice 6 point bulls, but the shot just wasn't there, so he never let go of the string.

Late on the evening of Sept. 15th Danny got on the edge of a big herd of elk that were out feeding in a thick willow bog. He got to within 50 yards of the herd bull that night. Because of thick cover he never got a clear look at the bull's rack, just enough to know it was a true monster. His bugle, though, was unmistakable. It was the nastiest bugle Danny has heard in his 16 years of elk hunting.

The next morning, Friday the 16th, Danny was back in that same vicinity hoping that the elk were still going to be there. As the sun was gaining height, with neither sight or sound of elk, Danny was about to dive off of this steep ridge and climb the next three ridges to the North looking for something.

Right before he started off he heard it. The bugle of bugles. The kind that makes your stomach turn over and your mouth hang open. It was the same bull. He knew where the bull was, and he knew it was likely the bull would come his way. Waiting a few minutes confirmed his hunch, the bull bugled again, closer. And then again, closer yet.

It was a very windy day, with the elk coming his way he decided not to call. Instead he got on the back side of the ridge he was on, opposite the elk. Herd bulls usually round up the back of the herd. Danny knew that if he stayed on the same side of the ridge as the elk he would be inundated with cows any moment. With strong swirly winds, and that many eyes, his chance of getting a shot at the bull would be very slim. There were too many cows. By getting on the back side of the hill, out of sight of the elk, he planned on using his ears to parallel the herd. He knew, after years of seeing the elk move along this ridge, that the elk would eventually pop on to his side where the shade was better.

Danny learned this trick from our Dad, who did the same thing with him when Danny was 14 years old - different ridge, same trick. It produced a shot on a monster bull. That was back before Dad was a deadeye (by his own admission).

So Danny sat and listened. Then he heard it. The pop of a branch that he was waiting for. He started paralleling the herd. Thinking that he was ahead of the elk he angled towards the top of the hill. All of the sudden Danny saw antlers, it was a nice 6 point satellite, but not the herd bull. The elk were moving too quick, and Danny had fallen behind. No shot presented itself on the satellite bull so Danny dropped back down his side of the ridge and quickly moved forward to get even with the main herd.  As he got to where he thought he was close to the elk the big bull bugled a mere thirty yards away. The elk had popped the ridge and were now on his side!

After a few minutes of this a cow rang out with a few whiny mews.  Branches popped to his left and then he saw her trotting right towards him. A second later he caught a glimpse of the 4th tine of the big bull and his massive body right on her heels. It takes a certain amount of luck to get a shot at an animal like this, no matter how well your plan comes together. Danny got that luck.

Now he's got an arrow nocked, bow pointing right where the elk are headed.

Here she comes, perfect, 8 yards right through a beautiful shooting lane. Any moment now and the bull will follow her. But he doesn't, of course. Instead of taking a few steps around a gnarled mess of trees the big bull walks right through them. Now he's through the opening and Danny has to improvise. With the bull at 15 yards Danny crouched down to his knees, his bow horizontal to, and about 6 inches off of the ground. The kind of shot you take at the range just for fun, but Danny had to do it to shoot underneath some branches that were covering the bull's vitals. He drew his bow, reached full draw, picked a spot, and loosed the arrow.

16 years of waiting for and dreaming of a shot like this. A monster bull at 15 yards, lip curling and grunting at the cow that just brought him over. The arrow is on it's way, no...NO! It barely nicked the bottom of a branch, the branch that he was trying to shoot under, and dove under nearth the bull's massive chest. Devastation doesn't begin to describe the feeling. How can that be, how can that happen? Thousands of arrows shot at the practice range in preparation for THIS MOMENT! NOOO!

But the wind was howling that day. The bull didn't have any idea that he'd been shot at he just stood there curling his upper lip. The desperation of the moment made taking out a second arrow pure reaction. It was on the string but the bull was moving again. This is a densely timbered hill side, he's behind a lot of trees now. Danny had to move. With the big herd close by it was risky, but he was able to go five or six steps. The bull is at 32 yards now, the exact distance that Danny has been shooting in the back yard. Hundreds and hundreds of arrows this summer at this distance. He doesn't even think twice. The shot opening was small. The elk's chest was framed between two trees, with limbs above his back.

The second arrow was on it's way. The shot was perfect, to the exact hair that Danny was aiming at. The bull was slightly quartered away, the arrow entered just above the elbow. Penetration was good, looked like it parked in the far shoulder (confirmed later).

The bull blasted across the mountain. The remainder of the herd jumped, but quickly calmed back down as Danny called to try and stop the big bull. Danny knew the shot was lethal, and he knew the bull would be piled up not very far away. He wanted so badly to go and find him but all of the cows were just standing around. So he waited.  An hour later all of the cows had meandered away.

I sure would have loved to be with Danny when he killed this bull. But at least I got to be apart of the cleaning and the pack out. The pack out wasn't too horrible.


Danny and I with his bull 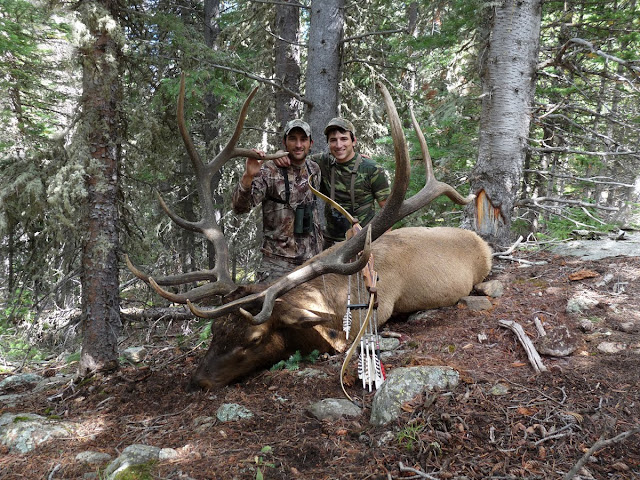 We did some pretty careful cleaning knowing that the dangerous end of the arrow was still somewhere inside the cavity. After removing the heart and lungs we still didn't see it. Peeling apart the lungs finally exposed the arrow, just like this. The head and cape topped the scales right at 85 lbs. Not horrible, but walking through the brush was difficult. How elk remain silent when moving through the trees with this kind of headgear is beyond me. 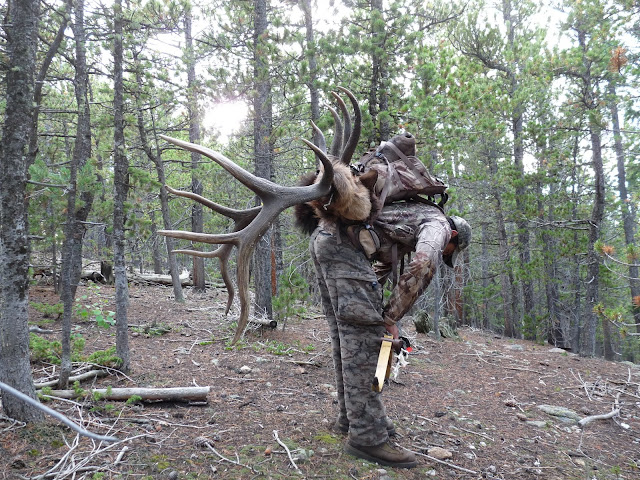 Danny shot this elk with a Rampart recurve and a Grizzly broadhead. The bloodtrail was profuse and easy to follow. But with an arrow in the heart that would be expected. He is shooting a 225 grain broadhead and 630 grains of total arrow weight.

Nice job Danny! A fine mule deer, a monster bull elk, how could the season get any better? (oh, it does) 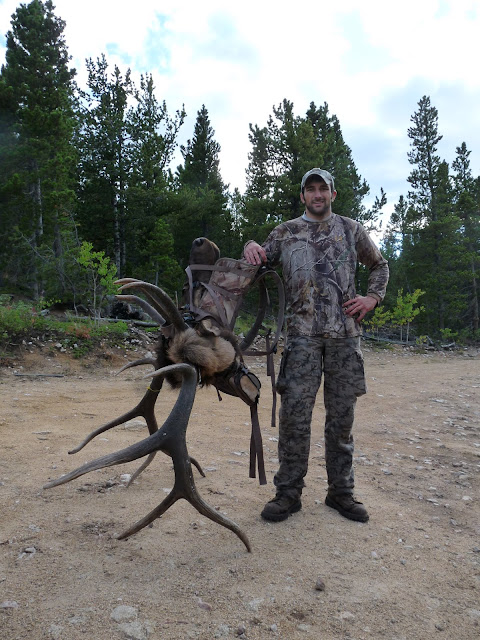