I have been keeping tract of the bows we sell in our store for a while now. My sample is quite large but only representative of my store, not the market as a whole.

I am including these statistics in my blog for a few reasons.


These stats do not include kid's bows, or "beginner" bows like the Samick.

The vast majority of all bows sold in this study were sold to hunters as opposed to target shooters (my observation). Only 3% of the bows we have sold have been under Colorado's legal hunting weight limit of 35#.

Here are the most popular makers in order. These include both new and used sales (these stats are skewed specifically towards my store and do not represent the market as a whole in any way, these numbers are more influenced by availability and price point rather than popularity) :
Spirit - 16%
Rampart - 13%
Bear - 12%
Wapiti - 6%
Mohawk - 6%
Hawk - 4%
Martin - 3%
Ben Pearson - 2%
Damon Howatt - 2%
Robertson - 2%
Bighorn - 2%
The other 32% is a mix between other production and custom bows. 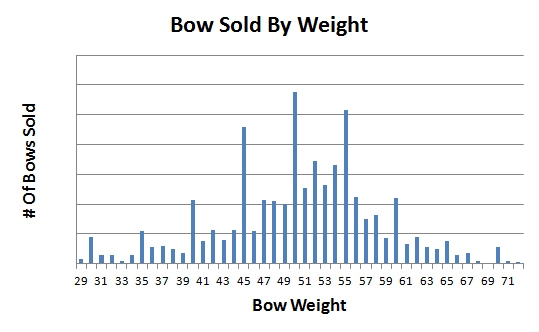 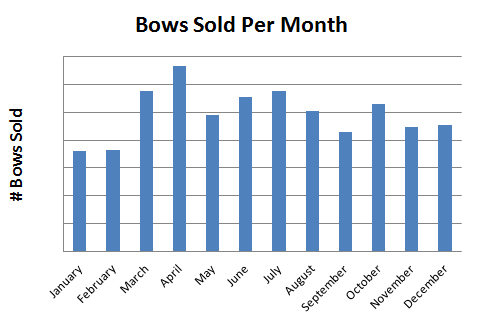 The first year I kept stats I did not include Jan. and Feb. (though they are still the slowest months). This graph is not a fair representation for that reason. Recently Jan. and Feb. look close to Nov. and Dec. April has sold more bows every single year except 2011, where it was a close second to March.

In my observation, tax returns often get spent on luxury items, like bows. I believe that is why April sees such a big spike in sales which then drops off quickly in May. Throughout the summer, when people are shooting more, they buy more bows. Peaking in July and tapering off as hunting season approaches. Sales regain speed when the hunting season ends. Here in Colorado, September is the most popular bowhunting month. I would assume that the monthly graph would look quite a bit different in "whitetail" states where October and November are the most popular bowhunting months. It is cold in Jan. and Feb. and not many people are outdoors shooting. I think customers buy fewer bows in those months because they aren't shooting as often, and bows aren't on their minds. Once spring rolls around, turkeys start gobbling, and people take to the outdoors to shoot, they start buying more bows.


A few things to keep in mind:


Statistics I would like to see for my own curiosity but that I have either not documented, or don't have the means to document:

Please read these statistics for what they are. One sample of the market based on the business I do here in Denver, CO. I do not wish for these statistics to be read as a popularity contest between bowyers or bow designs. These numbers don't lie, BUT they only tell a very small part of the story. There are only two things I feel are slightly indicative of the market in whole. 1) Bow weight. Even that is skewed by local demand for local purposes. And, 2) Average cost per bow. But that must be also be weighed against local incomes and local demands. I do sell quite a few bows out of state, which is why I think cost might be kind of relevant to the market as a whole.

We here at the shop all do our very best to remain as objective and neutral as possible with our customers. I do not believe that I am doing a customer justice by recommending a certain bow to him. We are very conscious of allowing the customer to shoot as many bows as he can, and to then make up his own mind based on his own criteria. Now obviously we have the most experience with the local bowyers that we represent, so when concerns over warranty or stability arise, we can answer with certainty about the bowyers we have dealt the most with. I know that impacts sales, leading to more sales for local bowyers, and less for bowyers in other parts of the state. Of the out-of-state bowyers that I deal with, the longer we carry their bows the more we sell for these same reasons.

So, while I realize that our personal opinions do persuade buyers, it is of minimal amount. We let the bows do their own talking. Any discussion of our own personal opinions are tempered by our encouragement to the customer to decide themselves by shooting various types.

I don't sell a significant amount of other styles of bows to even make a blip on my statistics. Horse bows and self bows are the two other most popular styles that I sell. I perused my list and could not find enough of both combined to account for even .02%.

In sum, I feel that this can be an interesting read if you like this stuff, with some useful information to bowyers. How it pertains to the entire country or other shops may or may not have relevance.