I'm going to share my version of the events of the opening weekend. I'll try to talk my Dad into sharing his version at some point. I want to know what was going through his head, what he thought and felt, and get his story in writing. I'll leave out the details of the shot and the moment of truth so that he has the chance to write it himself. 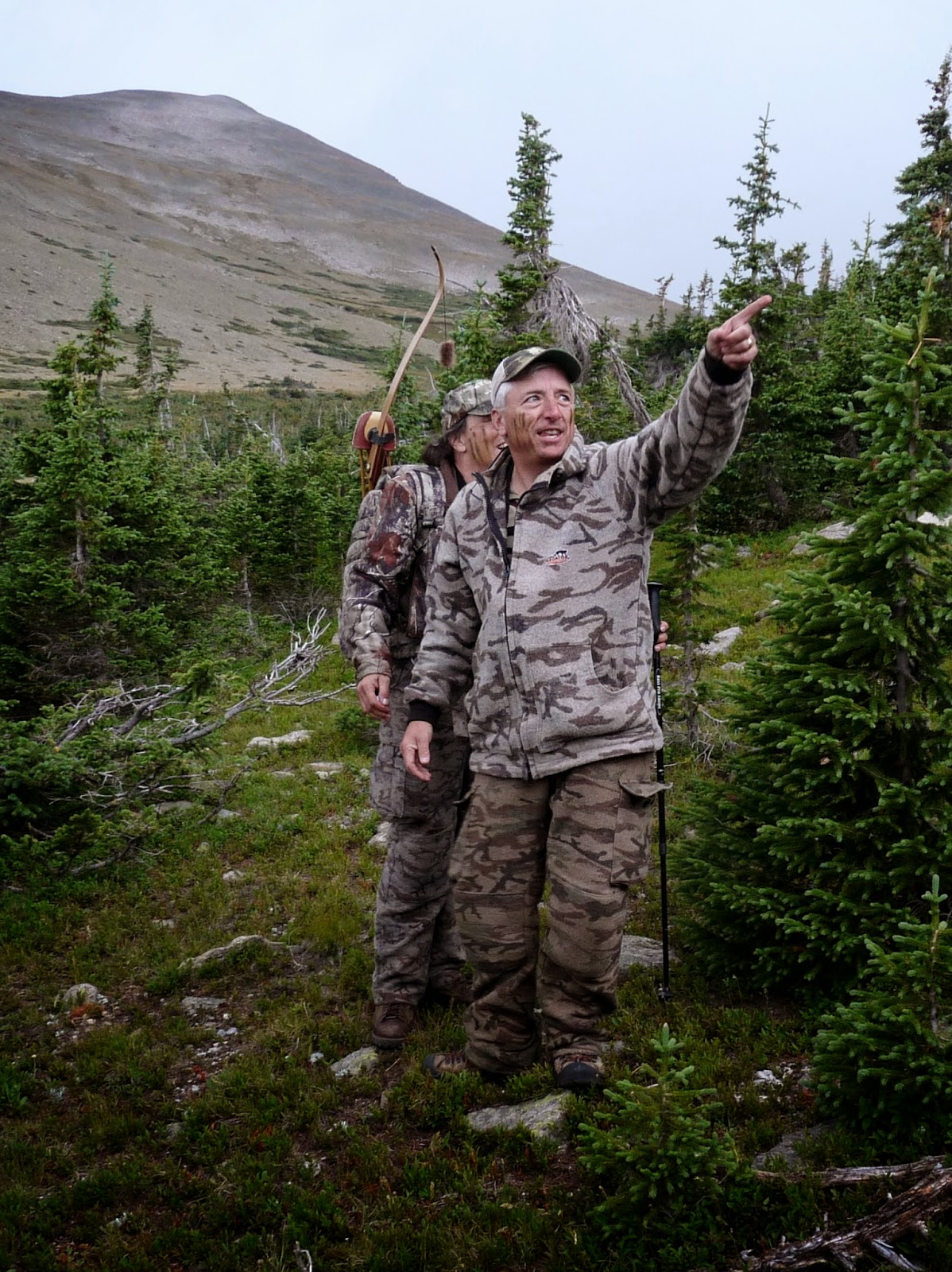 It took forever, but elk season finally arrived. Last winter my brother, Danny, made a comment that he was going to live on the mountain this summer trying to find the biggest herds of elk, and of course the biggest bulls. He wasn't lying. Danny had the elk pretty much pinned down throughout the summer. He got pictures of around 15 different BIG bulls, and countless smaller bulls. The mountain below is one of our favorite scouting perches. This summer we saw a lot of big bulls where I was standing when I snapped this picture. 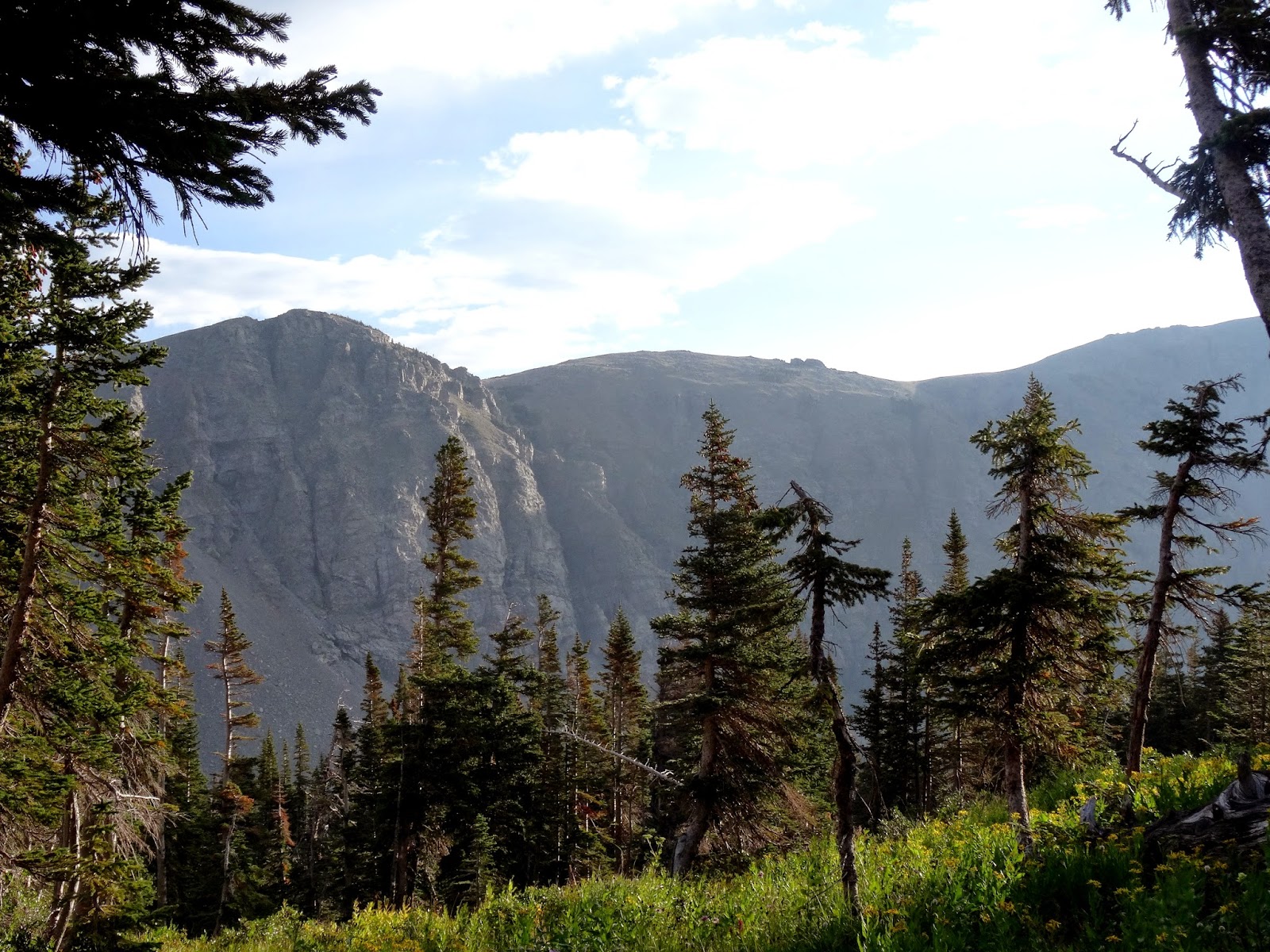 Thursday evening my cousin, Chad, our buddy Blake, and I drove up the mountain so that we could be in position to do a little scouting on Friday morning, the day before the season started. We were not let down, we saw around 90 elk between two of the mountains that we were planning on hunting. 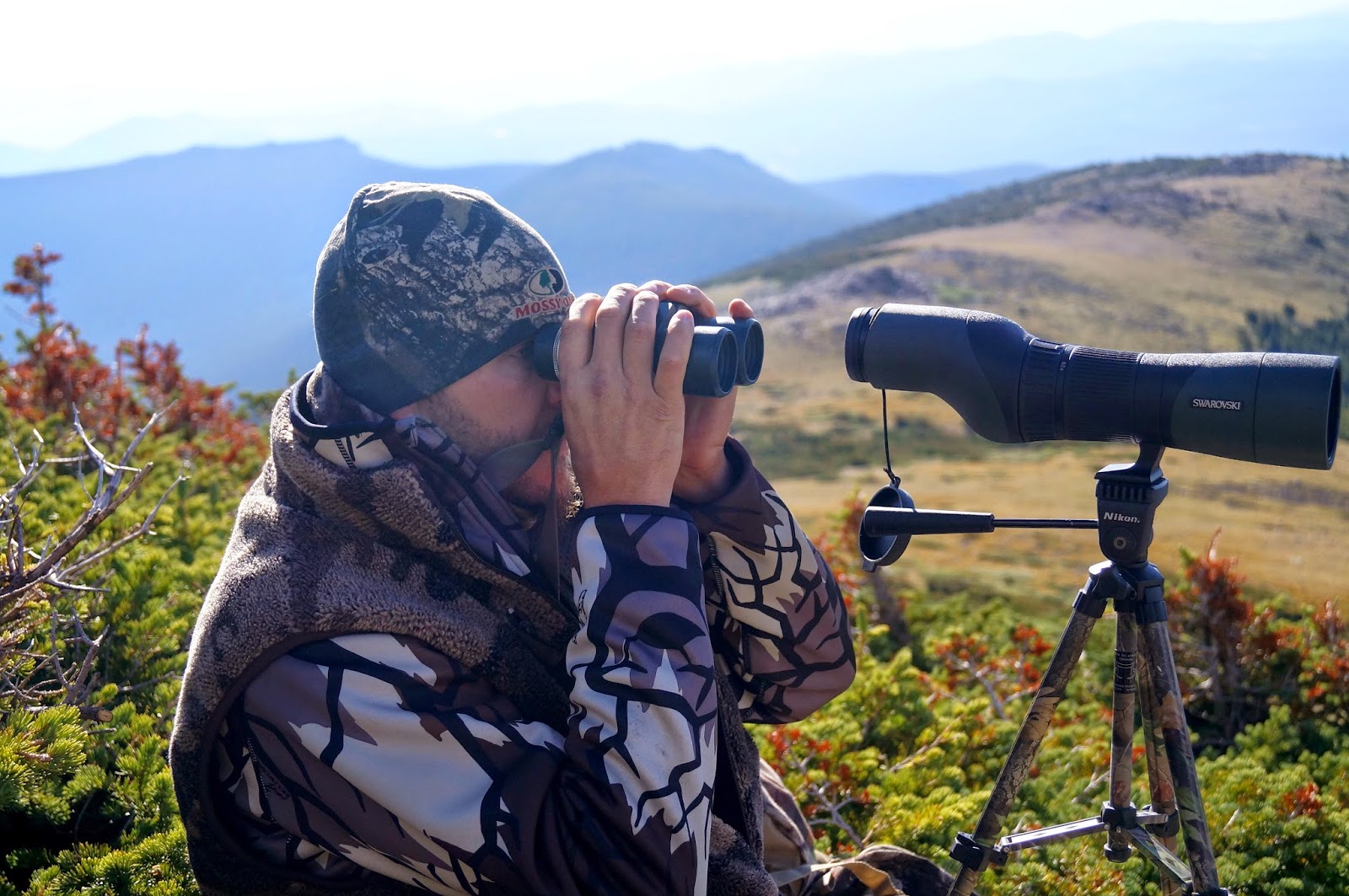 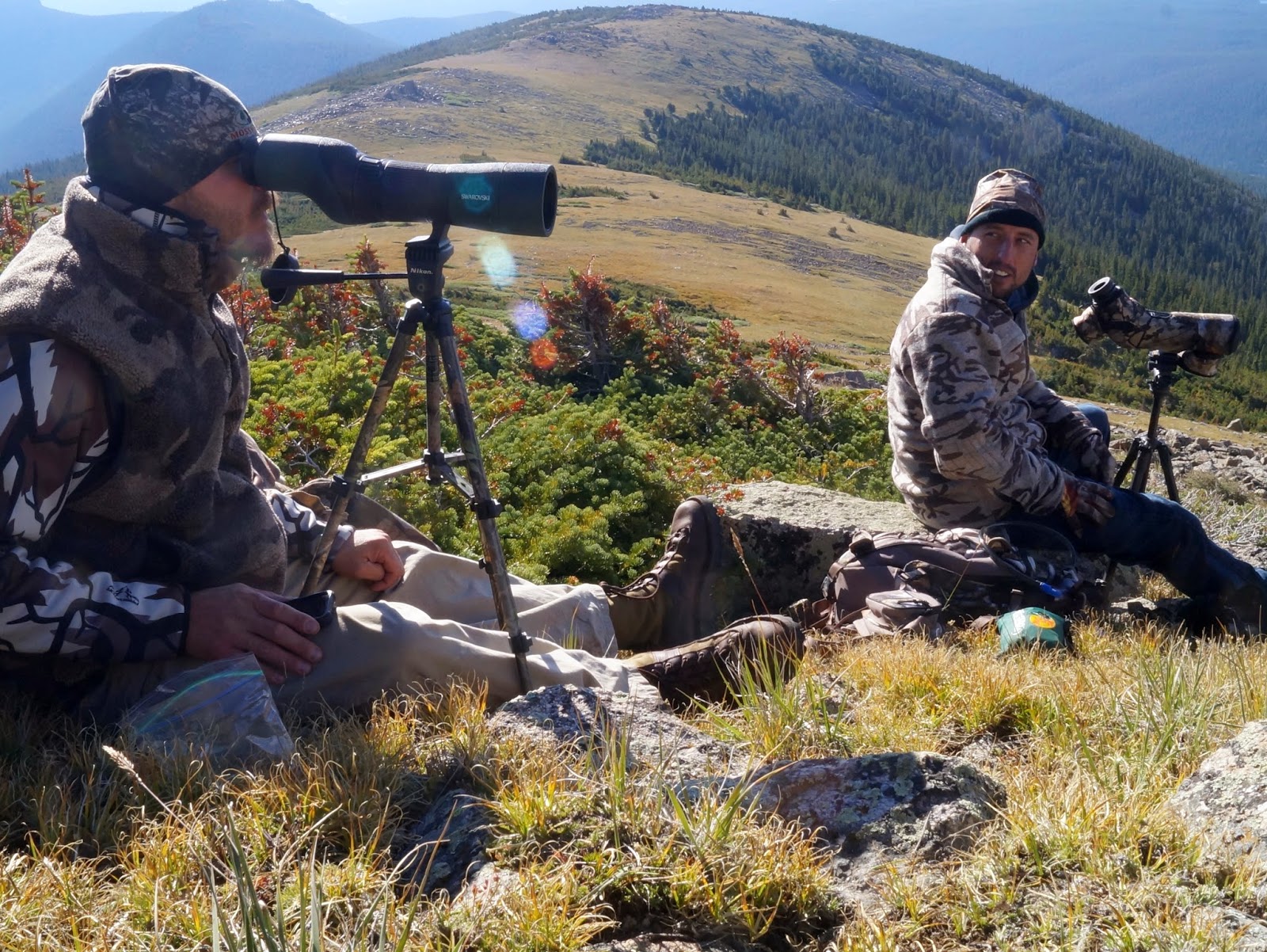 One group of 30 elk was on the mountain that my Dad planned on backpacking into with my Mom. Blake had his eye on a close by spike with super long tines that he wanted to fill his tag on, but Chad and I couldn't take our eyes off of the herd bull across the valley. He was impressive. All morning he would run around the cows with his head tilted back. Of course we were too far to hear him bugle, but we watched him stretch out his neck and cut loose every few minutes. 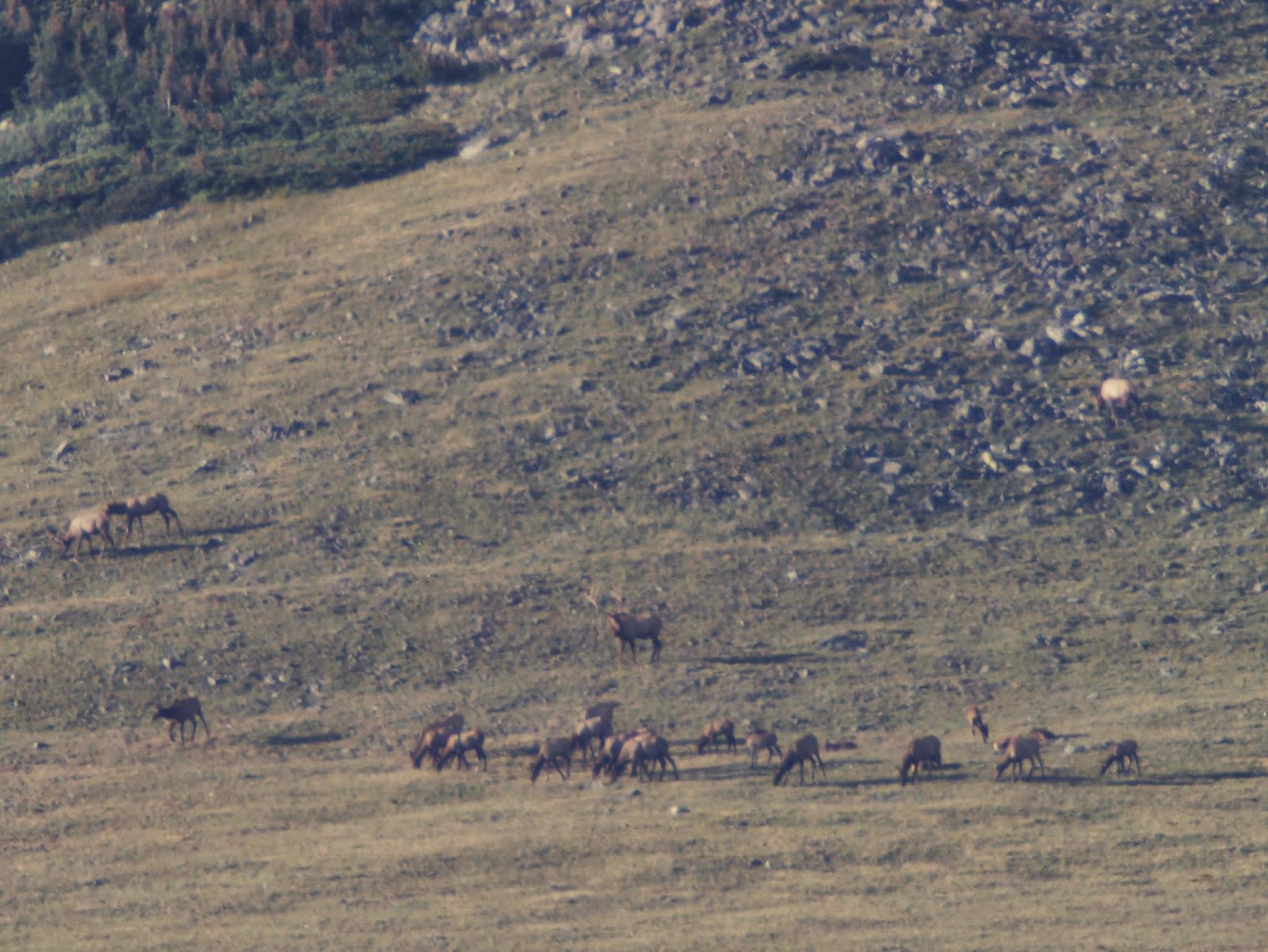 Chad, Blake and I hurried off the mountain so we could catch up with my Dad before he packed in. We got out our topo maps and showed him where the elk were. The cows all bedded down in the wide open, but at 9am that herd bull got them on their feet and pushed them through a saddle. Since we have hunted this area quite a few times in the past we knew that on certain years the elk get in a pattern where they pass through that saddle twice a day. My Dad knew exactly where to be the next morning. We all wished each other luck and headed out to our separate camp sites for the following morning's hunt.

Danny and I crept through this beautiful area with that morning's elk sign all around. We must have barely missed them because we didn't see a thing and nothing bugled near us. 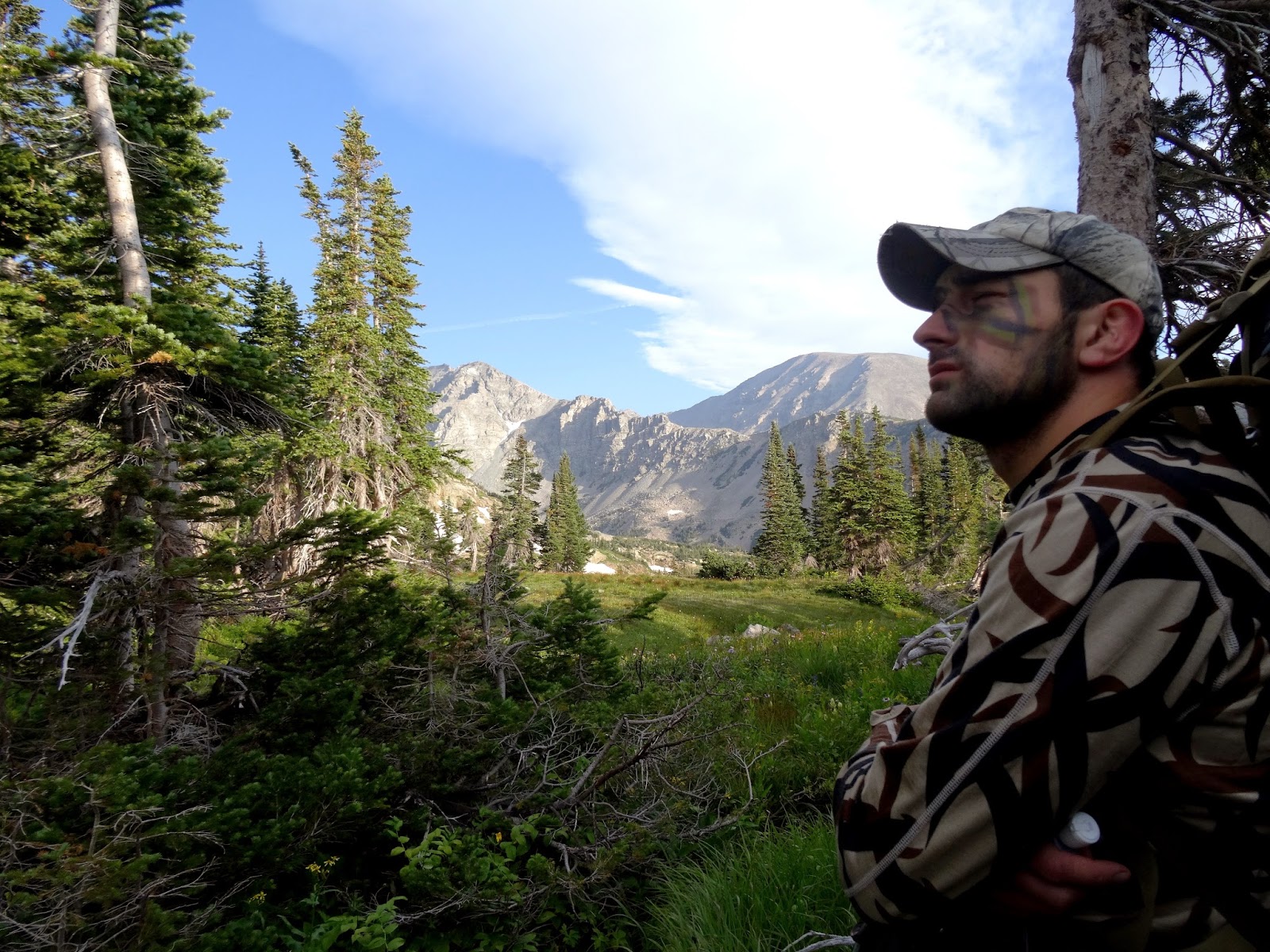 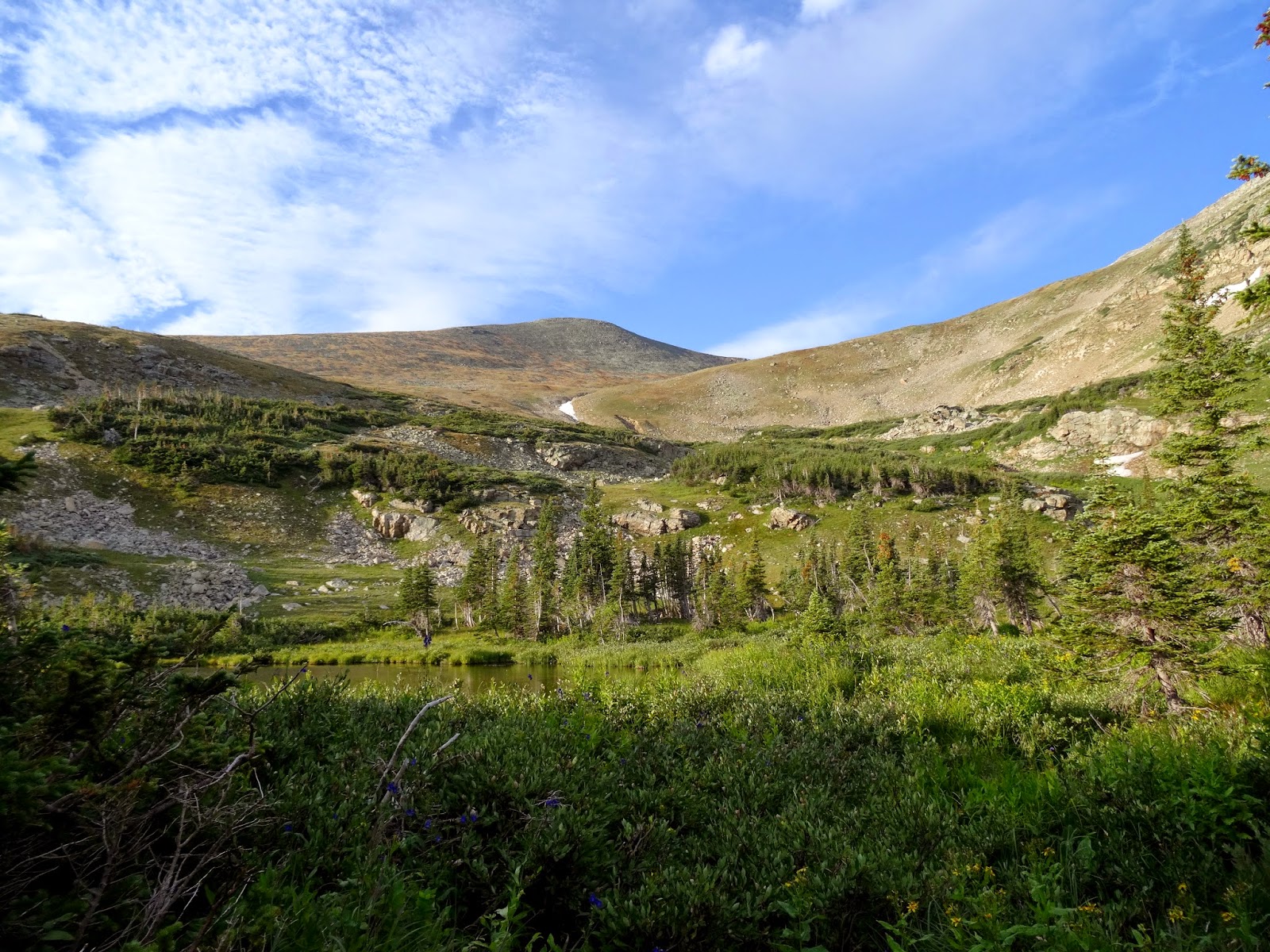 We all carry Garmin Rino GPS/Radios with us these days. It is fun to be able to check in with each other, or get coordinates to another's position with the push of a button. We all agreed that we would check in on the hour if it was convenient, but that we would make a real effort to check in at noon.

With the morning hunt mostly over Danny and I found a beautiful spot to take a break and eat a few snacks. 11am rolled around and I turned on my GPS to see if anybody else had theirs on. I was just about to turn my unit off when I got a half a second of static. I called back, anybody out there? A garbled message came back, something about a "bull behind the shoulder". I looked at my GPS, it was Dad!

"Come again Dad, what did you say?"

"I hit a bull right behind the shoulder. I thought it was a heart shot but I don't see any blood. I'M FREAKING OUT!".

My Dad asked how far away we were, and we told him it didn't matter.

I asked back, "Was it the big bull, and do you need any help?"

"Yes the big bull, and yes I need help."

Danny and I gave each other a big high five, we were PUMPED! Dad is color blind and cannot see red hardly at all, so him not finding blood didn't concern me. We gathered our things and started walking. We had a long, long, looooong way to go.

A half hour into our walk and we could finally see the mountain that dad was on. 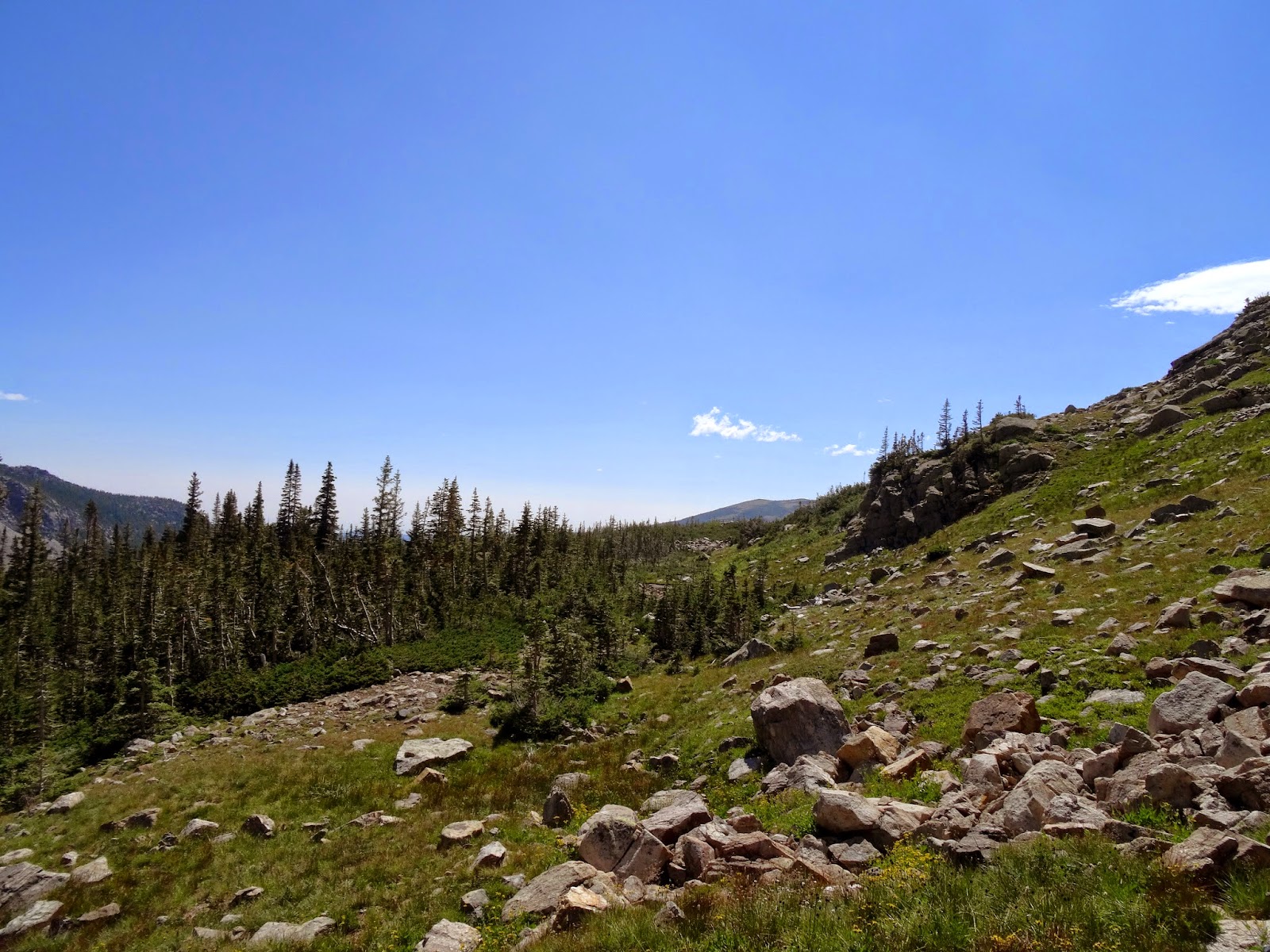 Here's a zoomed in shot of the picture above. You can see the small saddle that the herd went through. 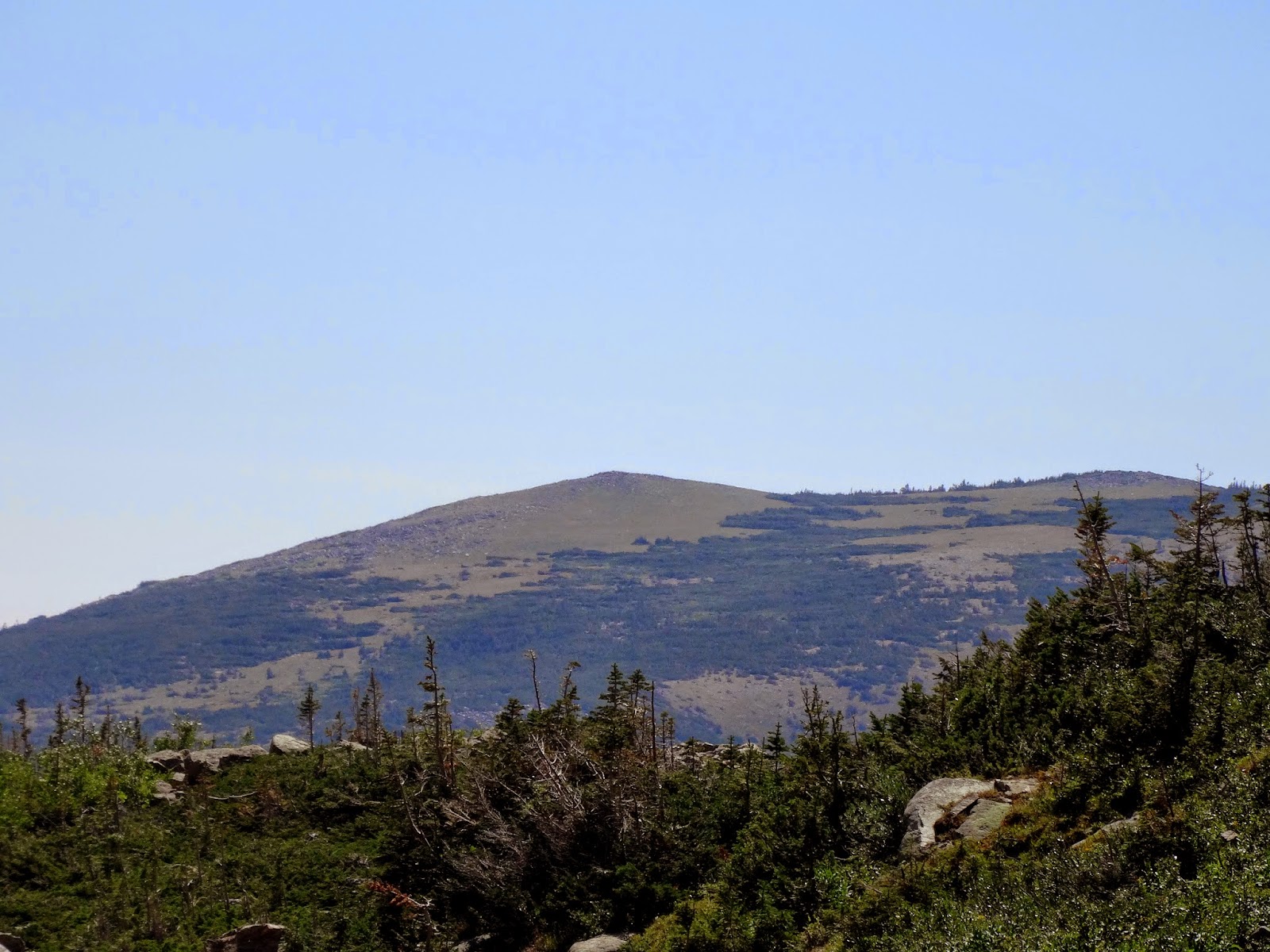 Five hours of straight walking, 1,000 ft down, and 2,000 ft up later, we walked up to my Mom and Dad taking a nap. My Dad just shook his head and said, "You guys are studs". I told him I didn't feel like a stud, and as I set my bow down I lurched to the side so I could yak in the bushes.

My Dad apologized for making us walk that far. He couldn't find any blood and spent the previous 5 hours zigzagging through the trees looking for tracks, blood, elk, anything. He said it was the biggest disappointment in his hunting career, and that he was flabbergasted. He thought that the shot was perfect, he saw the bull run away with only a small bit of his arrow sticking out in the crease of the front leg.

Even though Dad was bummed out I knew that we were going to find him. My brother is special, he has a sense, he has uncanny woodsmanship, and he's a total bloodhound on the trail.  I said, "Don't worry about it Dad, you got Danny here now, we'll find him".

My Dad told us the entire story and showed us the last drop of blood, if you could call it a drop.

Danny found a scuff mark a little ways down the hill from the blood. "Here you go Dad", he says. My Dad didn't think it was from his bull and told us that the herd ran the other way. Danny insisted on following the track. He reasoned the next few steps and walked through some bushes. "Here's another speck of blood!" Danny called out. Unreal, he doubled back?

Danny finds another speck of blood and then turns the corner around some trees, and there he was. My parents were napping within 50 yards of the elk. The bull didn't even make it 75 yards from where my Dad shot him.

Talk about going through some highs and lows in the span of a few hours. My Dad went from the excitement of knowing that he killed the bull of a lifetime, to confused at the sign, then utterly disappointed, and then back to elation.

My Mom was 3ft behind my Dad when he shot the bull. I'm so glad she was with him. The bull as he lay. 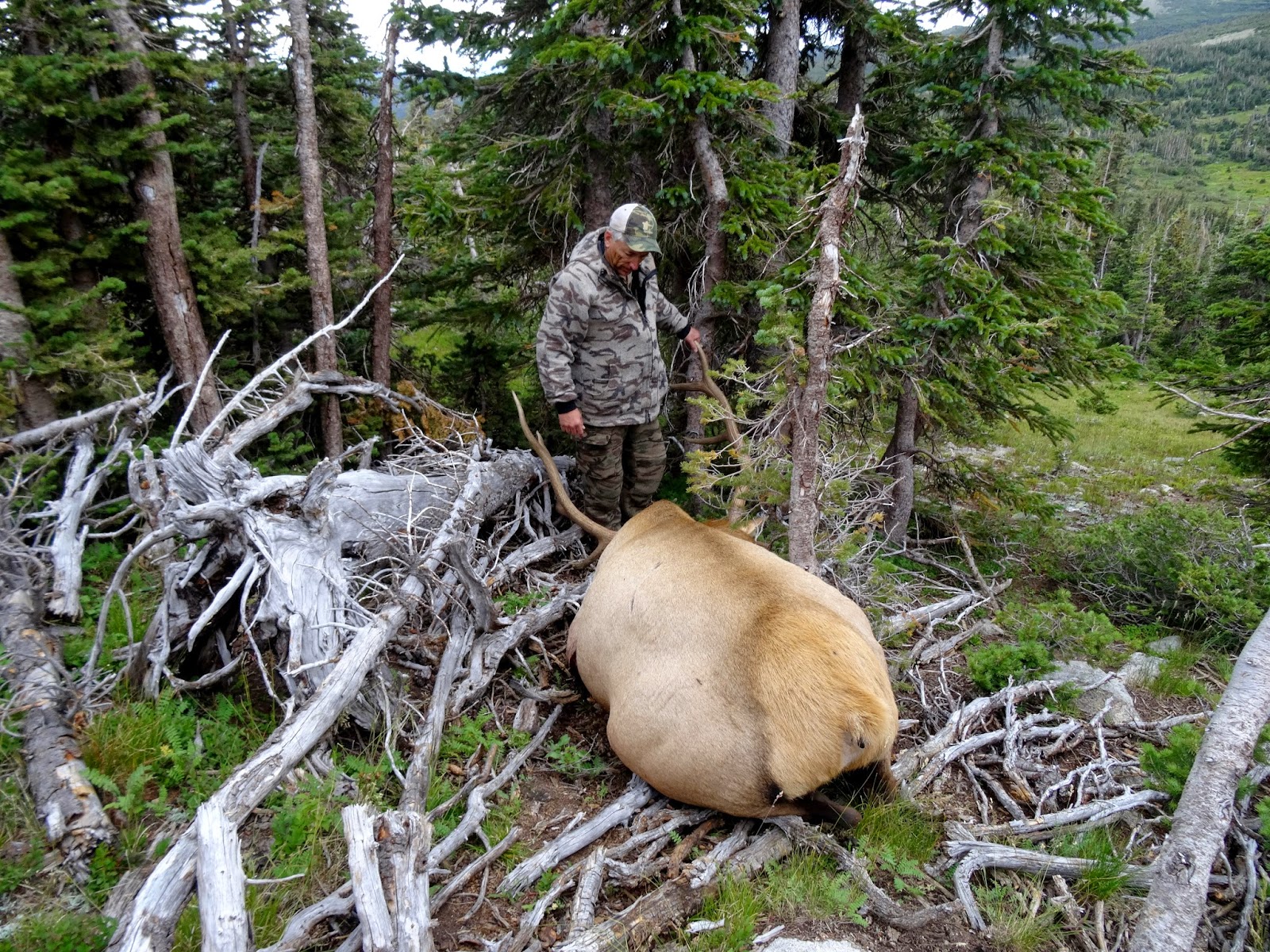 My Dad did shoot this bull right through the heart. You can see the entrance in the picture below, and the exit in the next. In the entire 75 yard long track we found a total of 6 droplets of blood. He just didn't bleed through the legs like he obviously would have if the arrow went through his ribs. The tip of the VPA Terminator was just barely poking through when we rolled him over. 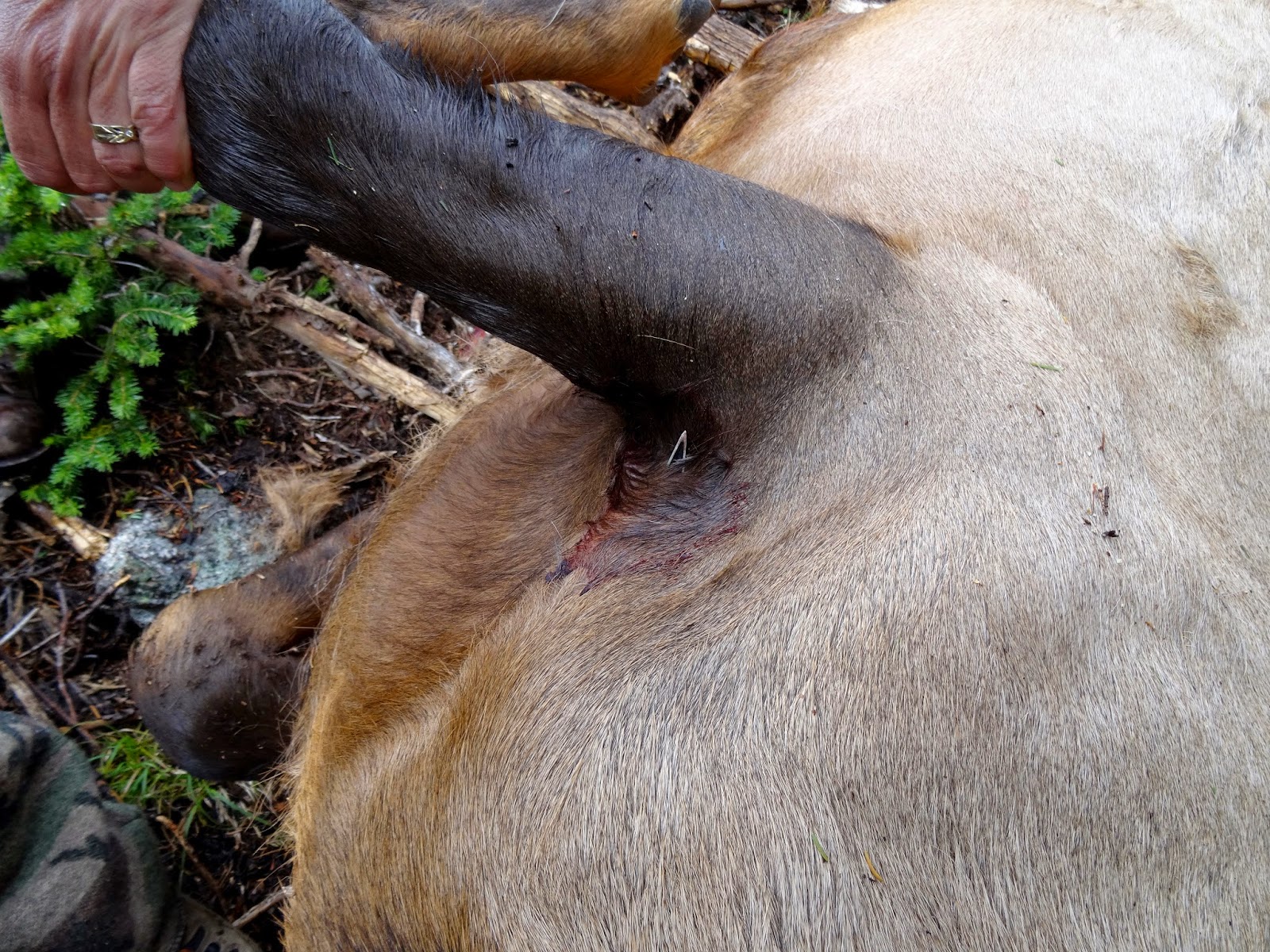 This guy has some great mass. 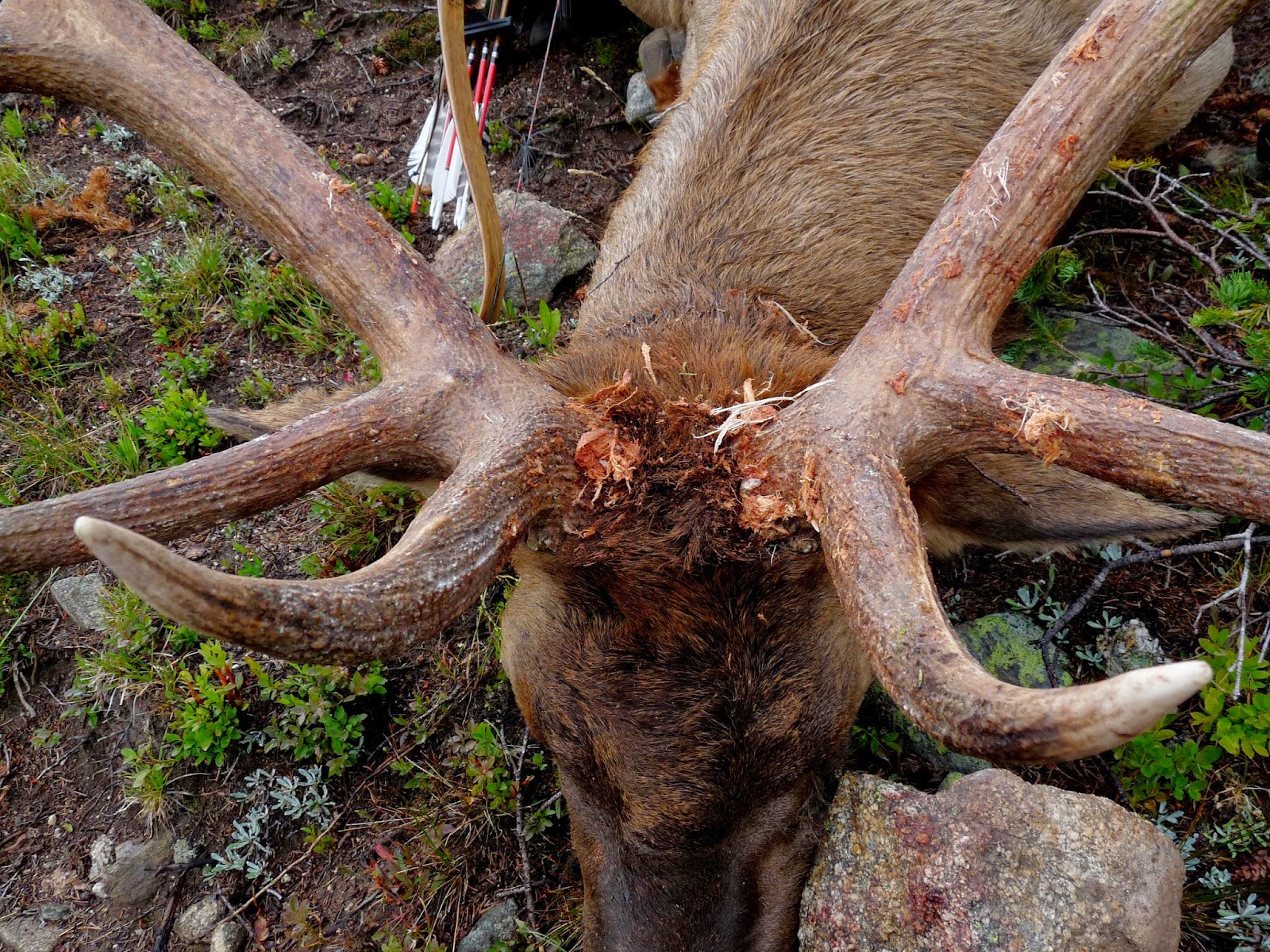 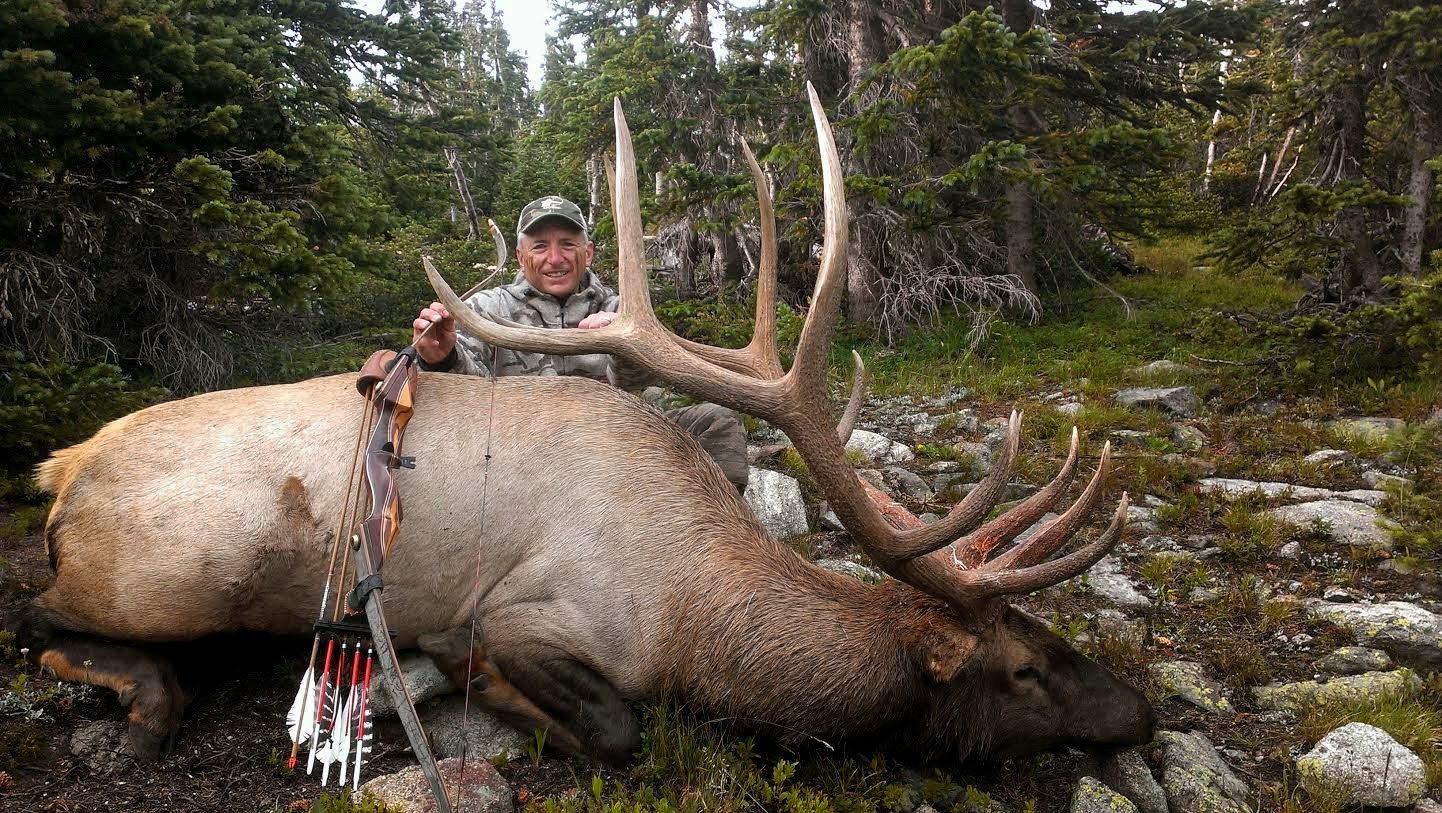 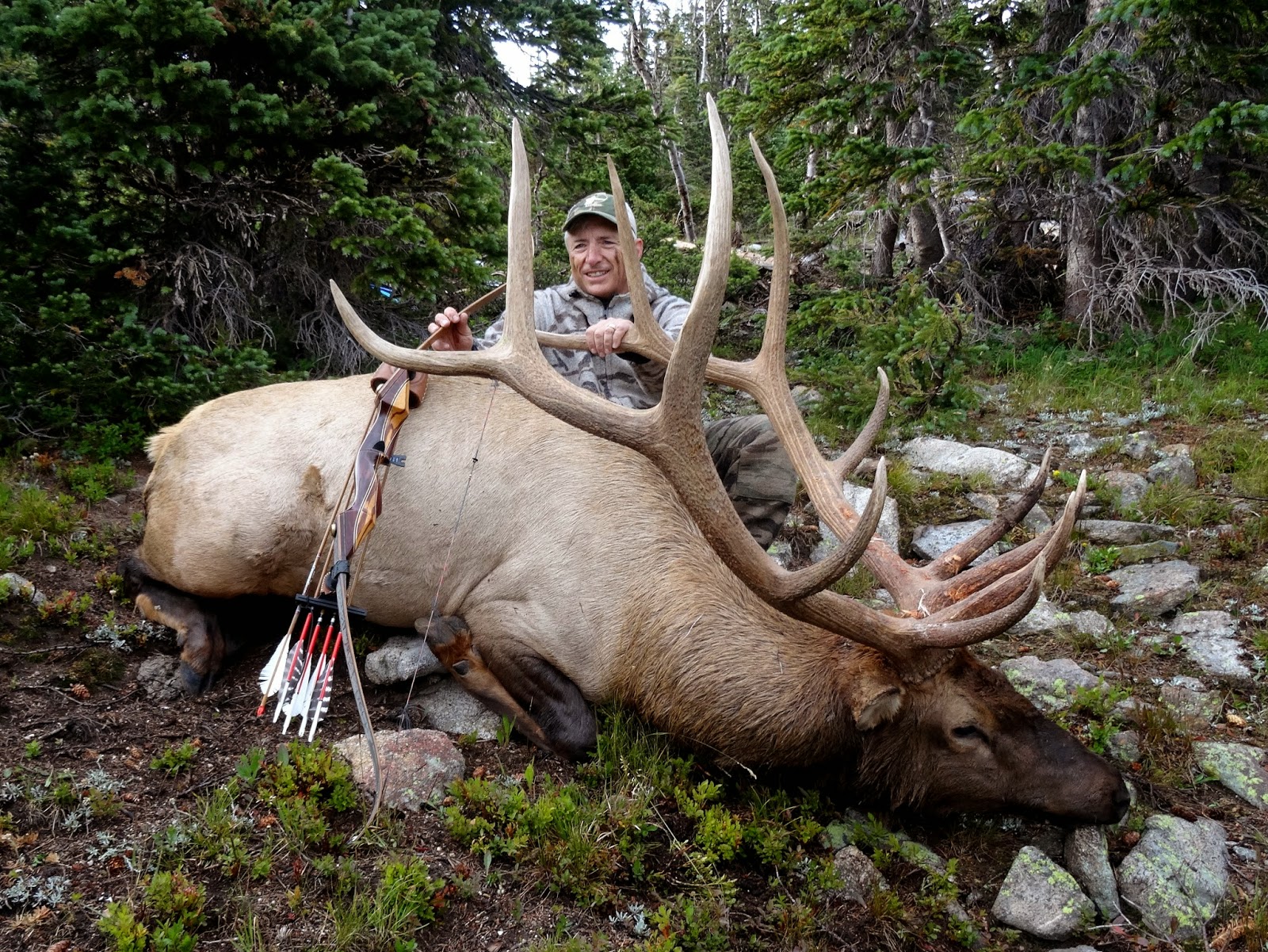 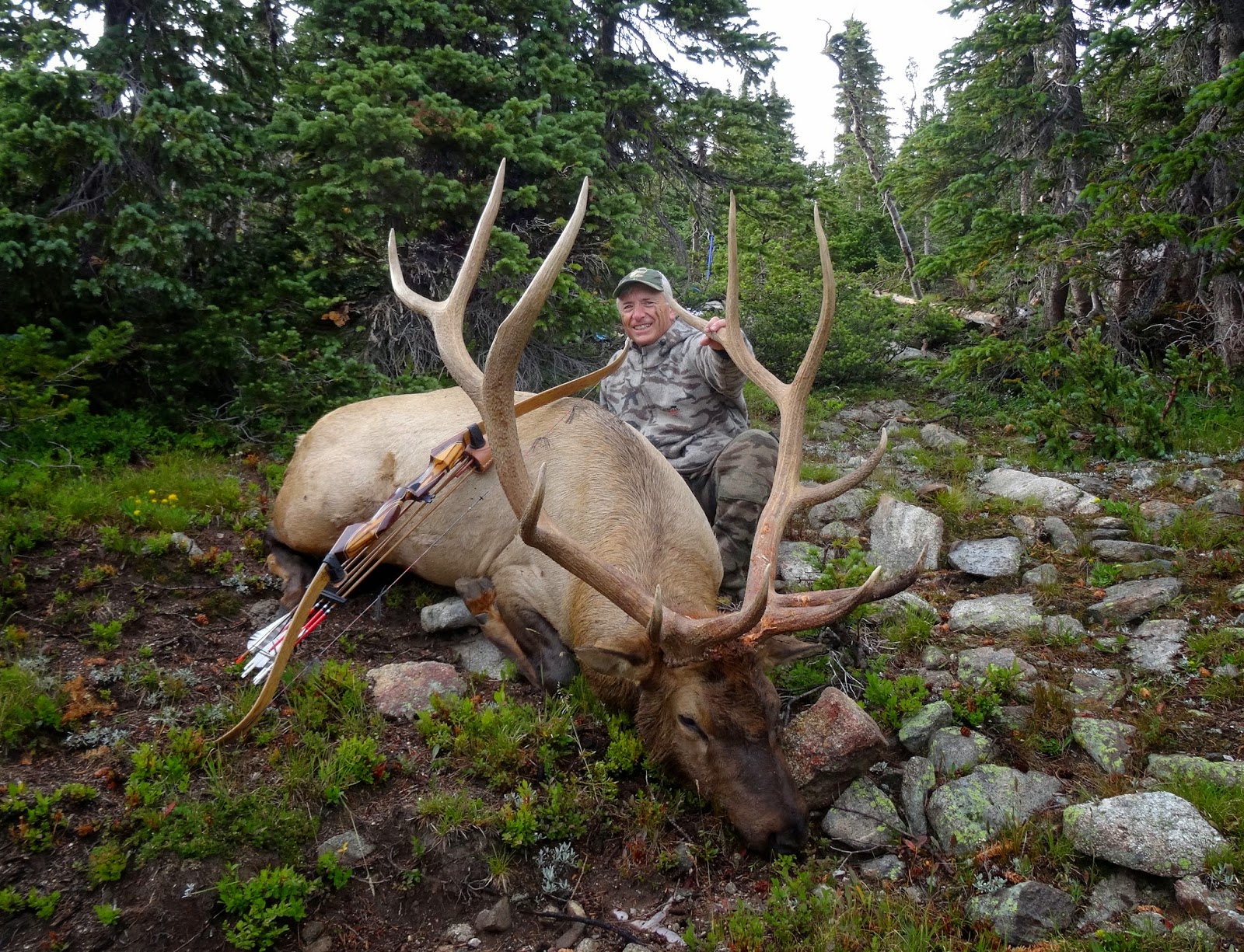 Me, Danny, Mom and Dad 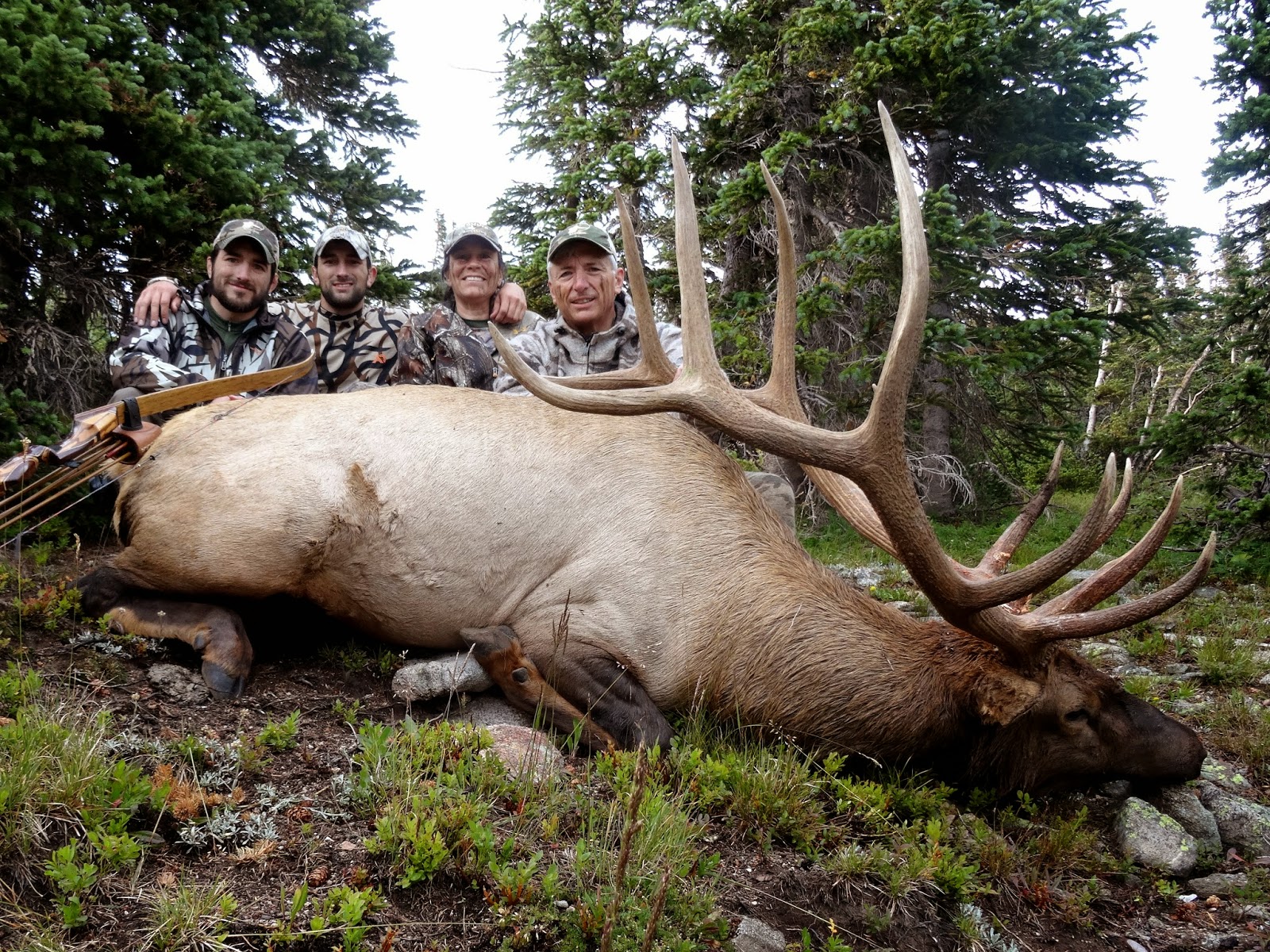 Danny was within 50 yards of the biggest elk he's ever seen, twice. The season has just begun and the best stuff is all ahead of us. Good luck everybody. More stories to come!

My Mom is TOUGH. It took us 4 hours and 45 minutes to walk back to the truck that night, mostly in the dark (we walked out to call for help for the packout). We kept having these nasty little storms come over the mountain and hammer us with sideways rain and hail. She had a hard time walking through all the rock fields and busting through the stunted pine. Not one time did she ever make a comment about how difficult it was. I was miserable, so I know that she must have been too.

Here's a parting shot of a sweet 7X7. I hope we can find him again! 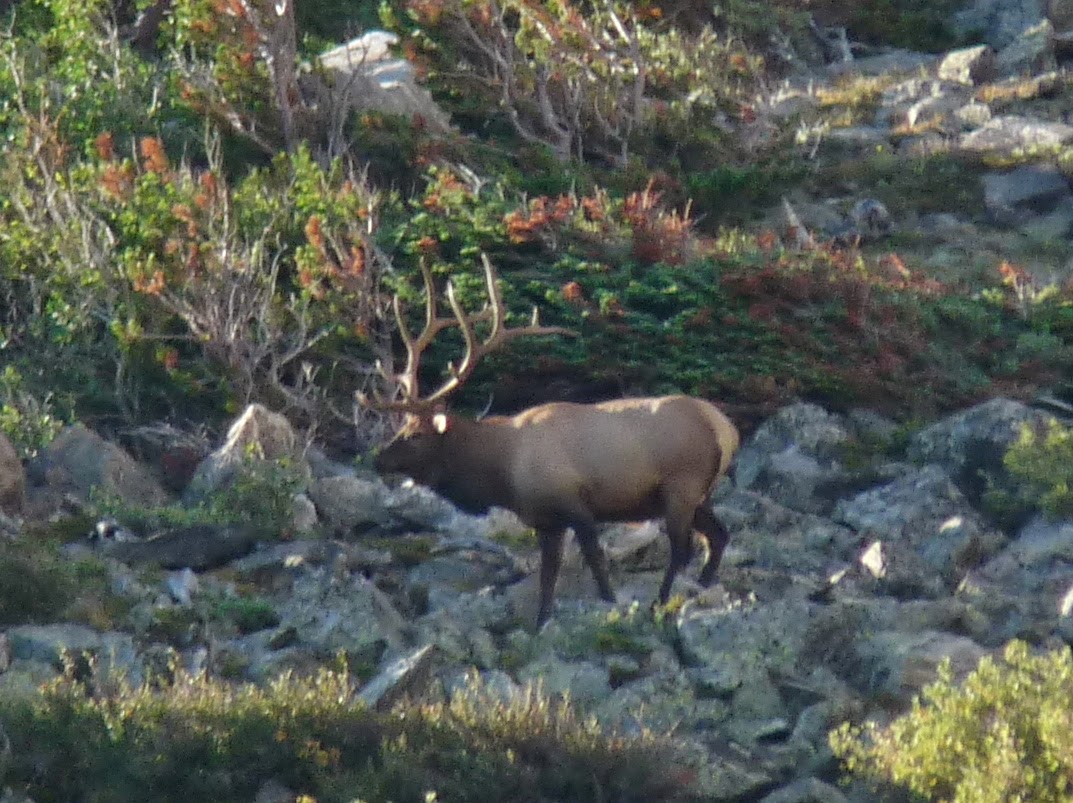