Opening weekend was brutal. We really worked hard, and for four days we hiked the leather off our boots. On day three our good friend, Del, followed some cows to their secret hiding place. He couldn't believe the hidden bowl they brought him to. He also could not get over the amount of bear sign. With all the elk and bear sign, and with how brutal and concealed this place was, he instantly named it "The Lair".

Lair:
What a perfect name!

The Lair is protected by huge cliffs on three sides. The bottom has a small creek running through the middle of it. Approaching The Lair from camp and hunting it effectively is nearly impossible. You have to navigate down the cliffs on the South side, several times you have to carefully lower your bow on to ledges below so you can use both hands to climb down. 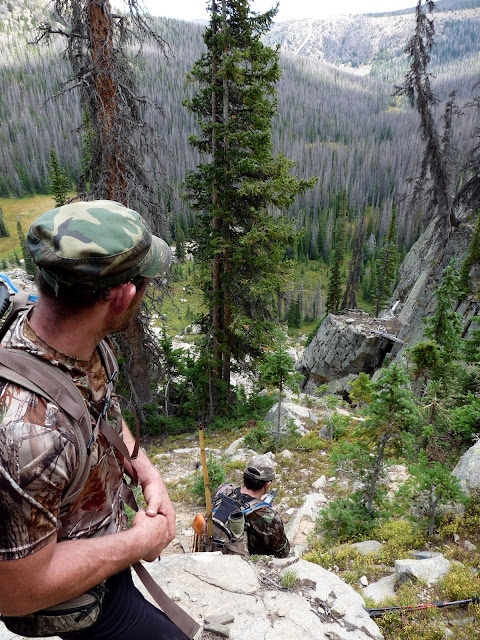 The cliffs do not drop straight down to The Lair though. They are more like stair steps. Each level you drop down to is loaded with elk and bear sign. Down and down you go, dropping from one step to another. The whole time you think the next level has to be the last.

The first of about four levels of The Lair 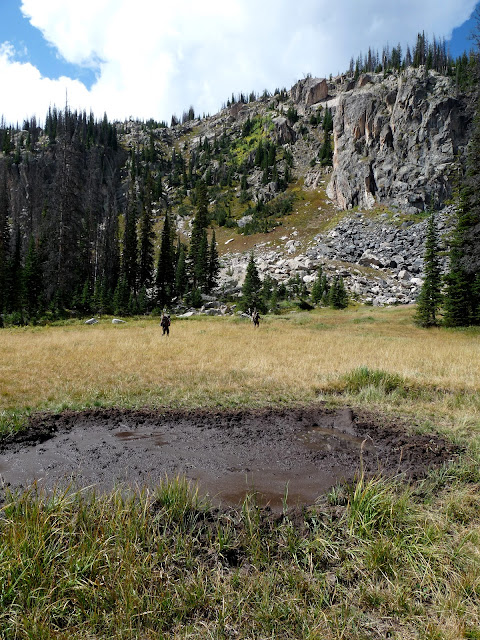 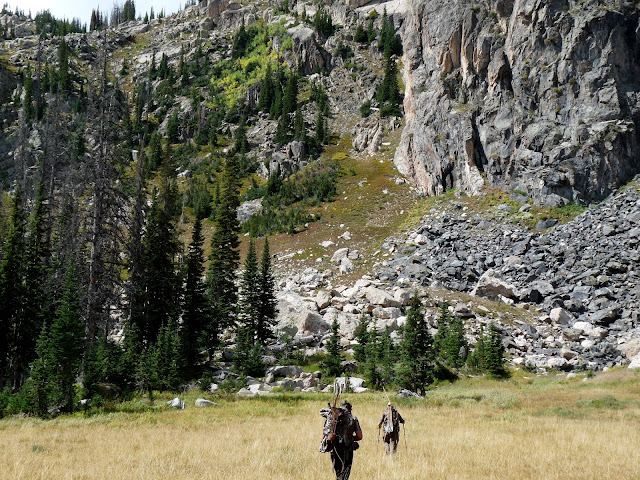 Kelly and I pumping some water before leaving The Lair 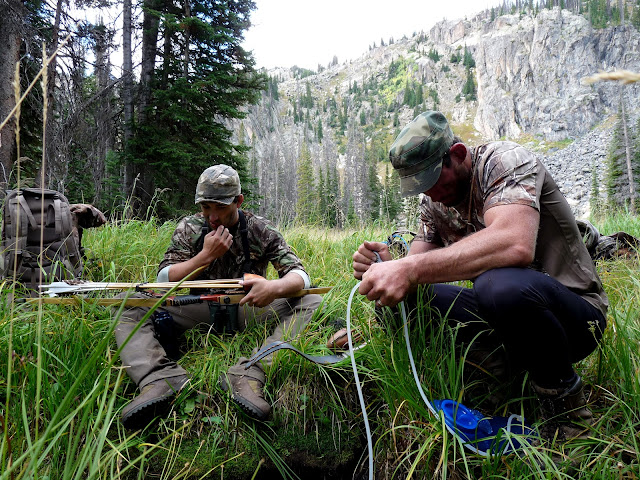 Del is a selfless hunter, after discovering The Lair he decided to hunt a different spot. But he had no problem allowing my brother Dan, my brother-in-law Kelly, and I to try our hand at this savage bowl.

Sunrise found us sitting on top of the cliffs looking down into The Lair. I had no interest in going down there. With the early morning thermals pulling the wind down the drainage I did not think we could get low enough, fast enough, to hunt effectively. And by the time we got there, I argued, everything would be bedding down for the afternoon.

Honestly though, envisioning the hike out of this place might have influenced my thinking a little bit. Those thoughts never enter Danny's mind...

No sooner did I get done explaining why we shouldn't go down there when a bugle shattered the air. I knew what that bugle meant. It was the kind of bugle you hear in late September, not late August. That kind of bugle meant we were going into The Lair. We looked in one of the meadows and saw the bull. And a bull he was. There was no talking Danny out of it now. He had already started walking before I could even say anything.

Into The Lair we went. 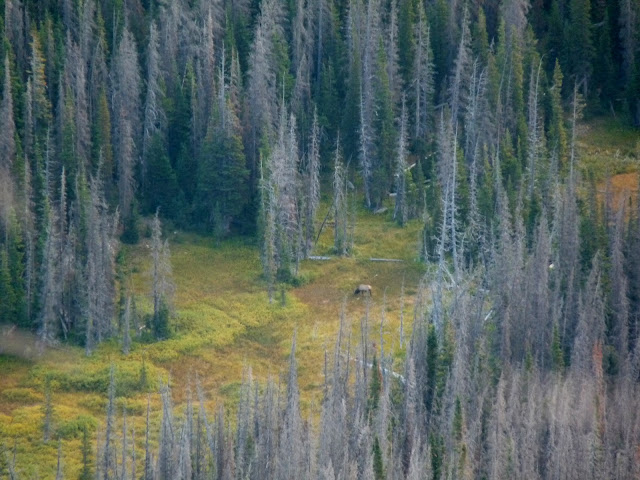 If only we had a better camera, the unique main beam really dropped off at the end 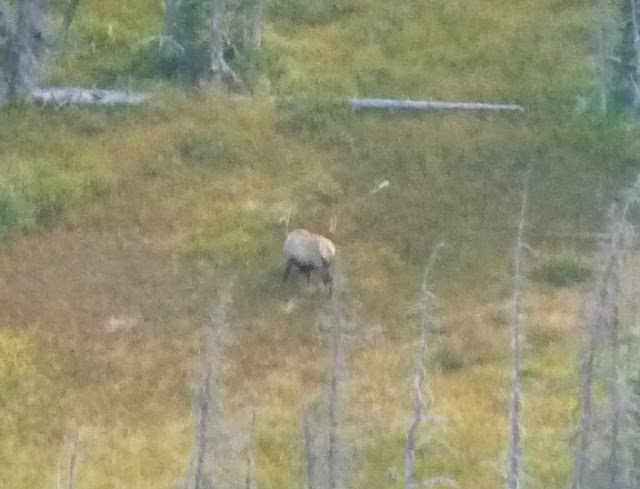 Step after step we crawled down. I've never seen so much bear sign! It was around every tree. The whole woods reeked of elk, and game trails zigzagged everywhere, with fresh tracks on all of them. We even found Del's tracks from the day before with elk tracks over the top of them. 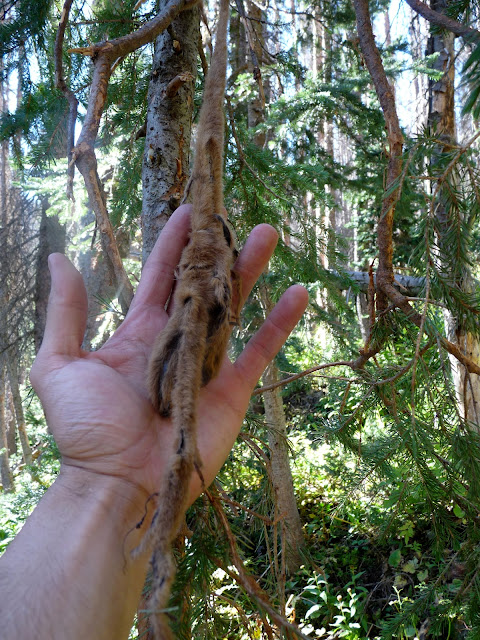 We finally found ourselves in the meadow where we saw the giant bull. I thought the whole plan was stupid at first. But Danny masterfully led us into the depths of The Lair, using a small hill on the SW side to keep our wind as far from the elk as possible. We tried to make the best of what we had and did a little blind calling. After 15 minutes the three of us re-convened to talk about our next step. I closed my eyes for a little bit. Danny gave a bugle and then whacked me on the arm. "Did you hear that?" He asked. I was sleeping, I didn't hear a thing. So I grabbed my cow call and gave a mew. Within a second I got a mew back. Back and forth I mewed with a cow, and she was coming!

We all took our positions, Kelly went off to the right and disappeared in the trees. Danny and I stayed together and set up on the edge of a boggy meadow. Soon I saw the cow, well, it turned out to be a calf, standing on the opposite side of a small bog. One more mew and here she came! I have an extra cow tag, and would love nothing more than to use it on a tender, good eating calf.

Danny giggled in my ear like a little kid, he sees what is about to unfold. I am going to have a perfect five yard shot at this calf. The wind is perfect and she has to walk behind some brush before she steps in to my shooting lane. Danny knows just as well as I do that this is as sure of a thing as there is in hunting. 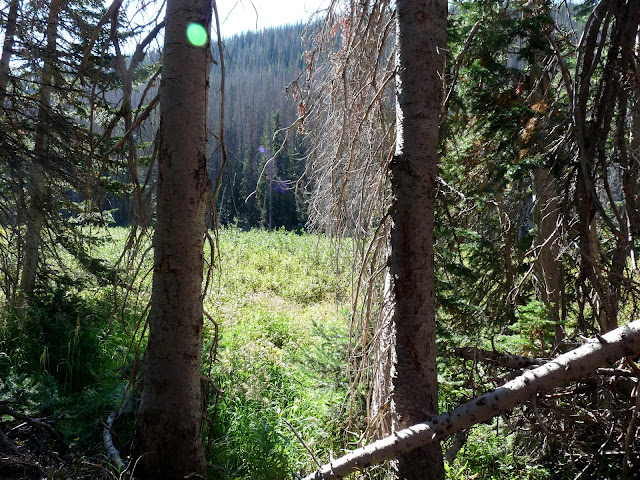 I'm playing the scenario out in my head. I already know when I am going to draw my bow. I am consciously reminding myself to pick a good spot. My hands and feet are perfectly in place. I've got complete control of my nerves, and I'm already thinking about how cool it will be to do this with my brother one step behind me.

The calf was walking along the edge of the bog, just 10 yards away now. I am starting to put tension on my bow string when I hear a soft thump, followed by a loud whack. The calf bolted into the willow bushes! It startled the heck out of me and took me half a second to figure out what the heck happened.

Kelly! That shot stealing son of a gun! I forgot all about him! I didn't have any idea he was even that close to me. He didn't know where I was, and in our group, if you get a good shot, you take it! 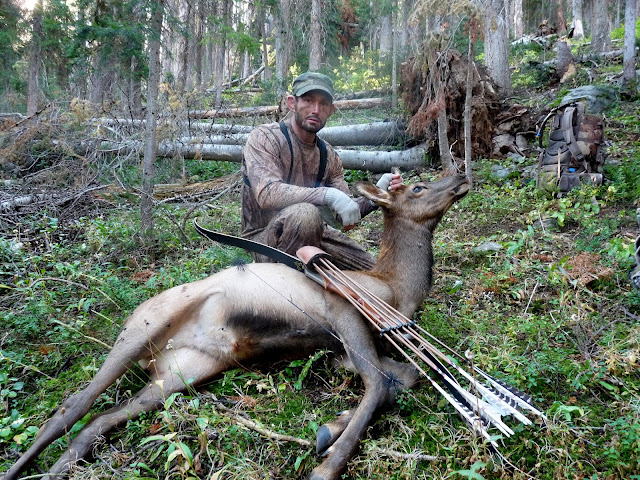 Our first trip in The Lair produced meat. Crawling out of there with the calf on our backs was really not much of an option. We could access The Lair from another trailhead and not have to deal with the cliffs, so we left the calf overnight and planned on fetching the meat the following day.

The Lair is a place of its own. Almost magical to the four of us who have hunted it. There is an old woman who used to outfit this area and we found the trail she cut into The Lair many, many years ago. I would be surprised if many people have visited this place since she quit guiding. Nobody in their right mind would! 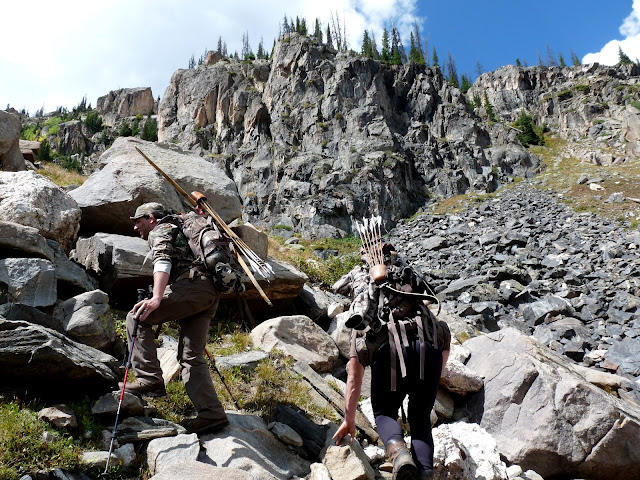 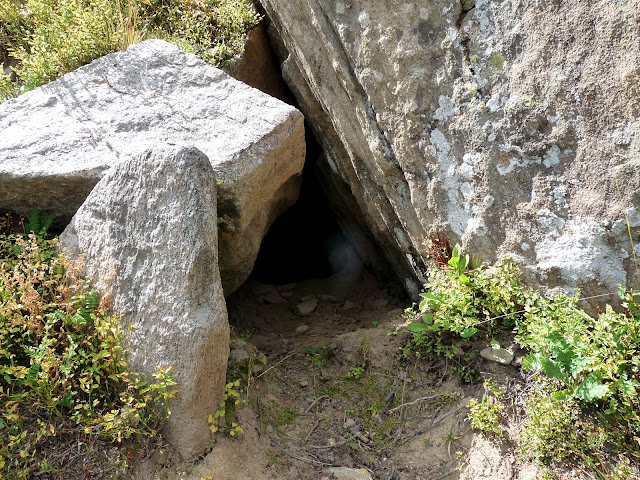 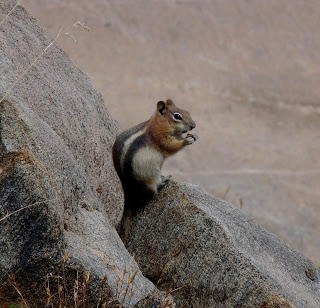 On the way in to recover the meat, which I did not help with, Danny, Del, and Kelly had a run-in with a stud of a bull, who is still alive. But that's another story for another day.

Keep checking back. Hopefully I will have a lot more good pictures and stories of the 2012 season!
Email ThisBlogThis!Share to TwitterShare to FacebookShare to Pinterest