Is It Over Already? 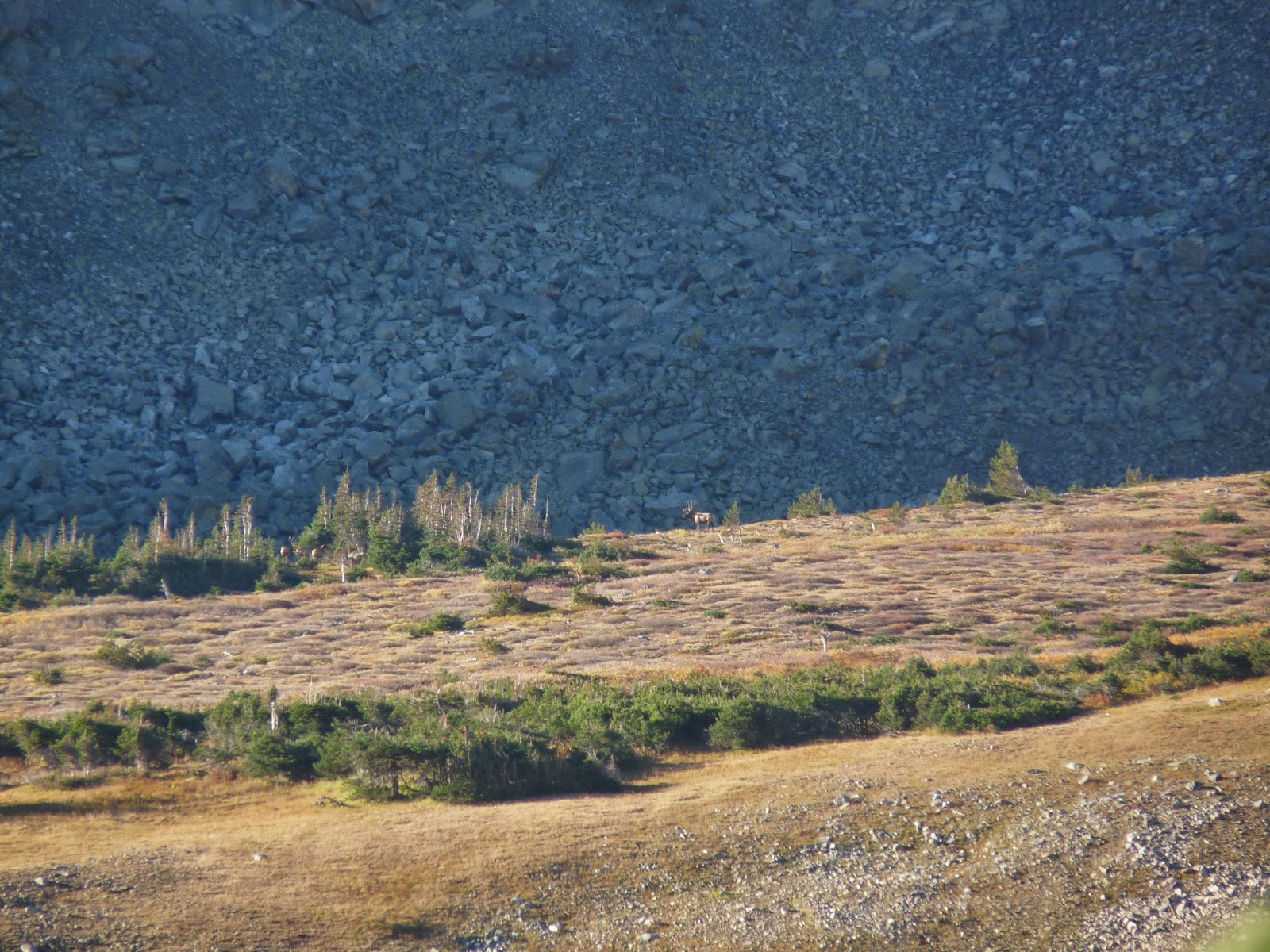 I really don't want to wait another 11 months before we can chase bugles in the Rockies again. But it's not like we have another choice. I live for this short time of the year. I'll spend the next 335 days anxiously awaiting the chance to do it all again.

My cousin, Chad, came out for the last 9 days of the season. The action started off intense. I had a number of massive bulls within shooting distance, but that always elusive shot just barely evaded me. There was always one branch, one small rise, or a bad angle that prevented me from loosing an arrow.

My brother, who already tagged out on a dandy, joined Chad and me to do some calling. The three of us snuck our way through a beautiful aspen grove on Sunday afternoon, one week before the season ended. We made our way to the top of the hill where, on the other side, it turned into a steep and gnarly north face ridge. Lots of blown down, dark timber. The perfect bedding area for elk. 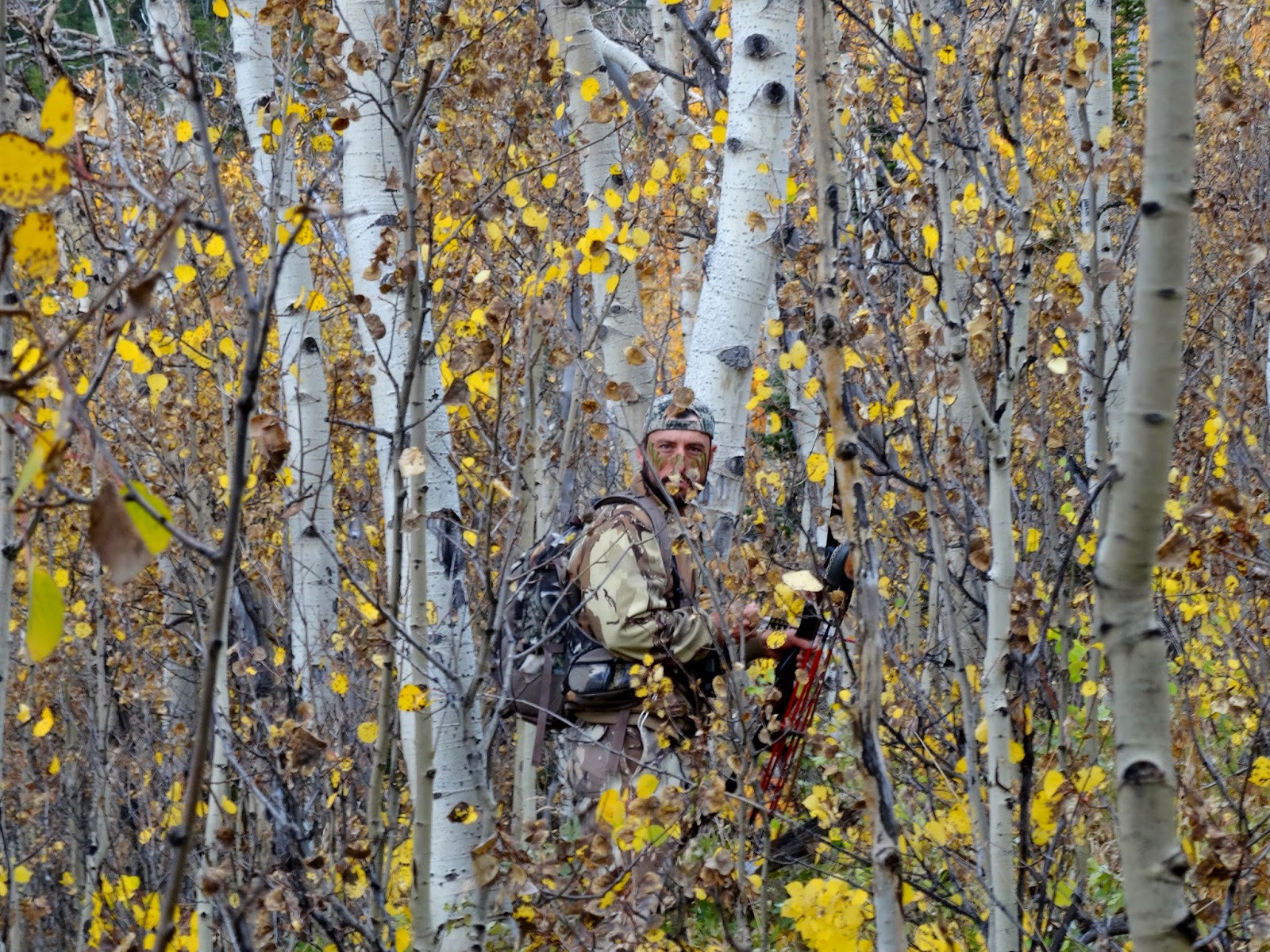 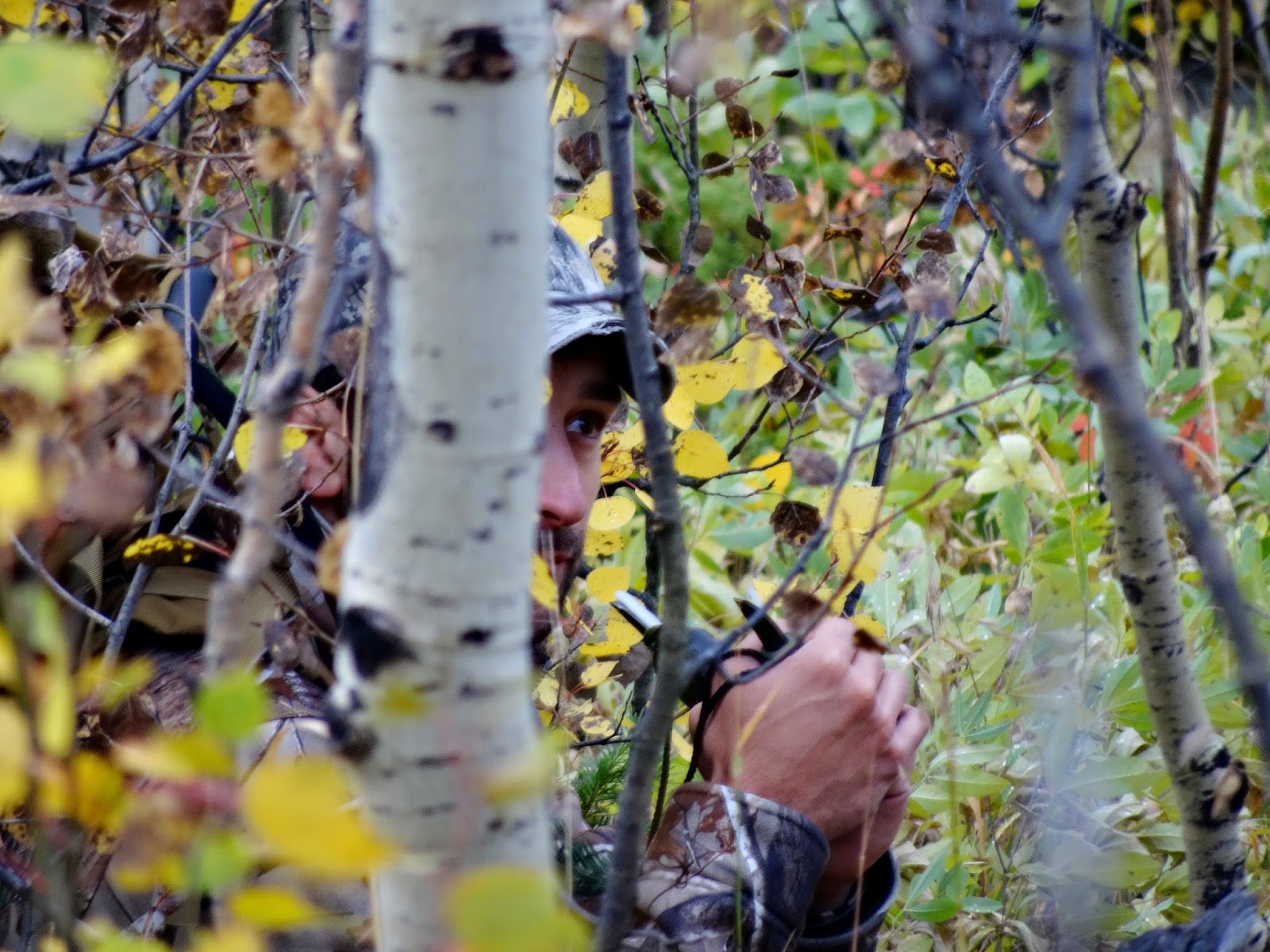 Chad taking a peek at a group of elk who were interested in our calls, but not committed to coming in. 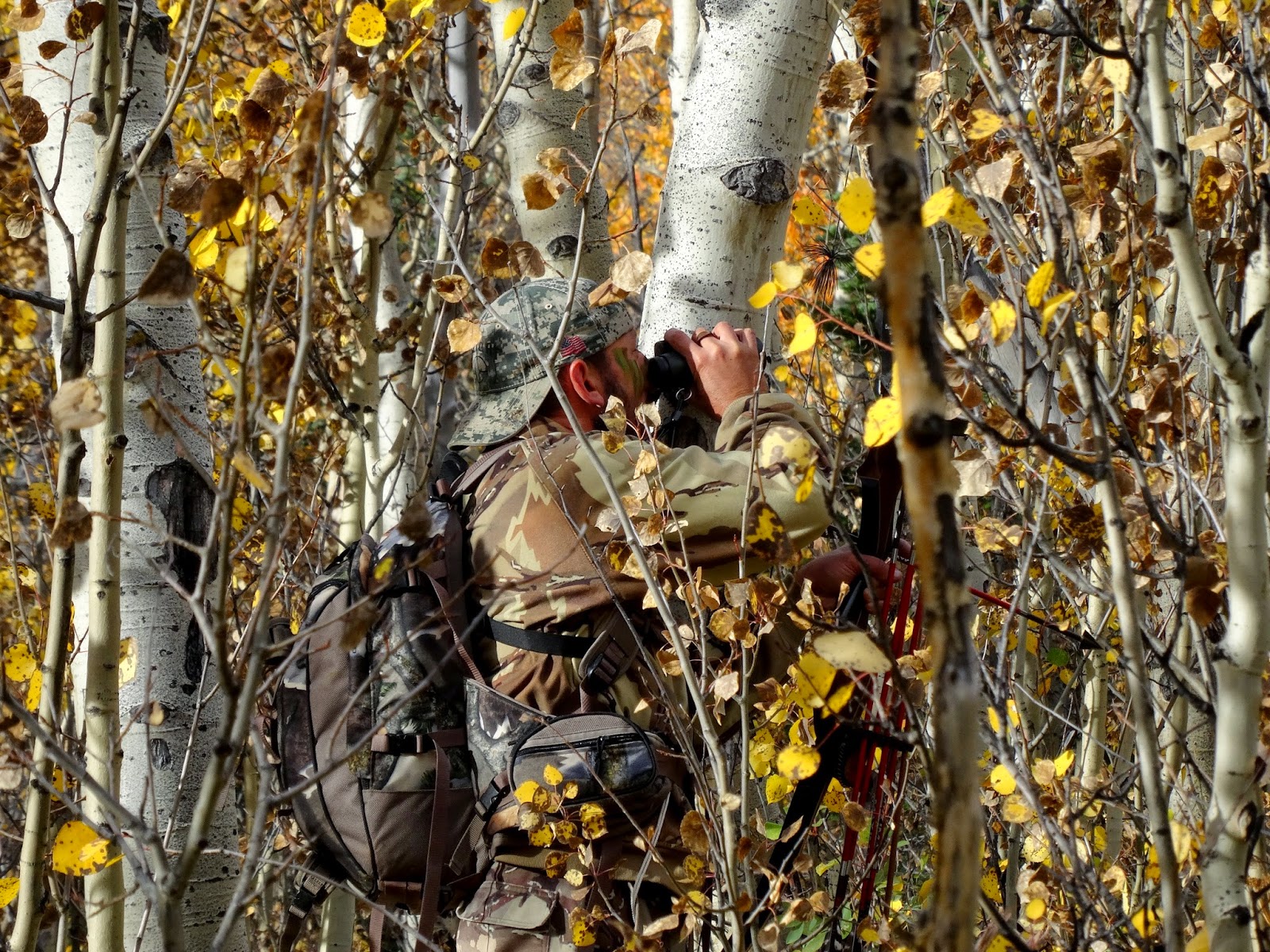 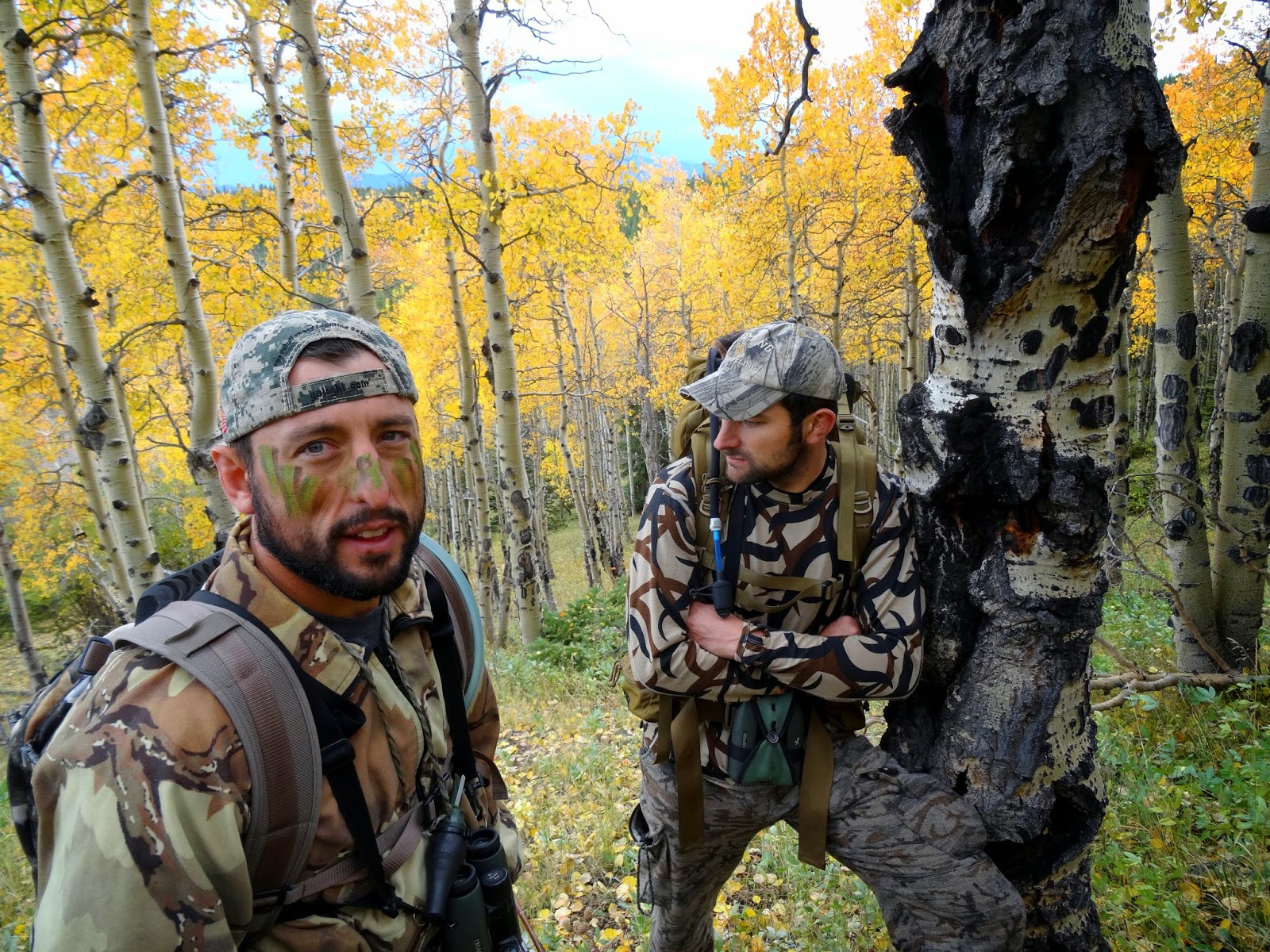 Five years ago I would have never dreamed that I would pass an opportunity to shoot any bull elk. But this year I was really hoping for a chance at a good bull. Several times this season I had smaller bulls in range that I just needed an excuse to let go. I probably would have shot any of them if I didn't have an excuse, but each time I let them go to my hunting partners, or got winded before I could get an arrow off my bow. Don't get me wrong, I would have been tickled pink if I ended up killing any of those bulls earlier in the season. But as we were sneaking our way through that aspen ridge, with one week left in the season, I was questioning my lack of urgency at the beginning of the year. My standards were about to get thrown on the window!

After Danny, Chad and I made our way to the top of the ridge we threw out a couple of bugles. We didn't necessarily expect anything to answer us so early in the afternoon, but on September 21st anything can happen.

As we sat there contemplating our next move we all heard a big branch break below us. Now in the old days, when we were still 'wet behind the ears elk hunters', we would not have thought twice about that branch and then been dumbfounded when an elk walked right up to us. I know that because the three of us have done that exact thing about 1,000 times in our elk hunting careers. But we're older now, better. Without looking at each other or saying a word Chad moved right, I moved left, and Danny dropped back over the hill.

Chad and I had this elk covered, no matter how he came in. I set my knees on the ground and lifted my head just in time to see antlers popping over the rise. The bull's head emerged, and his eyes locked onto me just as fast. I was wondering how he could possibly see me, and right then, Danny let out a little tiny bugle over the ridge from us. The bull immediately started walking right towards us.

I was about ten yards closer to the elk than Chad, and even though he had a shot opening before I did, he chose to let this elk walk into my opening. I pulled my bow back as the bull walked behind the double tree in the center of the picture below. He emerged on the other side, still walking, when I let go of the string.

The elk thundered off. Danny came over the hill at the same time Chad and I gave each other a high five. The shot was spot on. 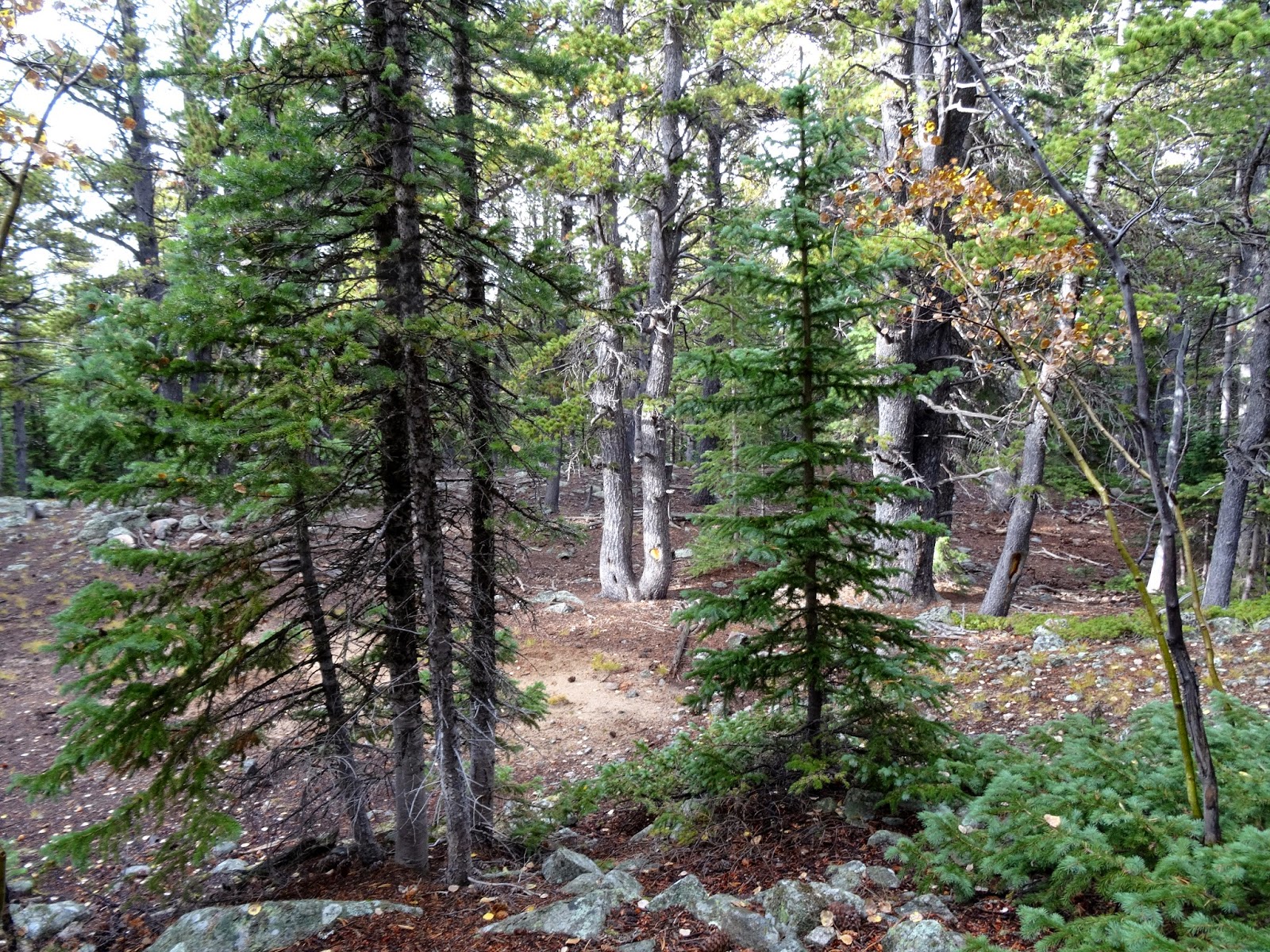 Finding this elk was a lot more difficult than we anticipated with the shot placement. It had rained hard for a couple hours before I shot this bull, wet pine needles are tough to follow a bloodtrail on. We found this bull on a ground search less than 200 yards from my shot. 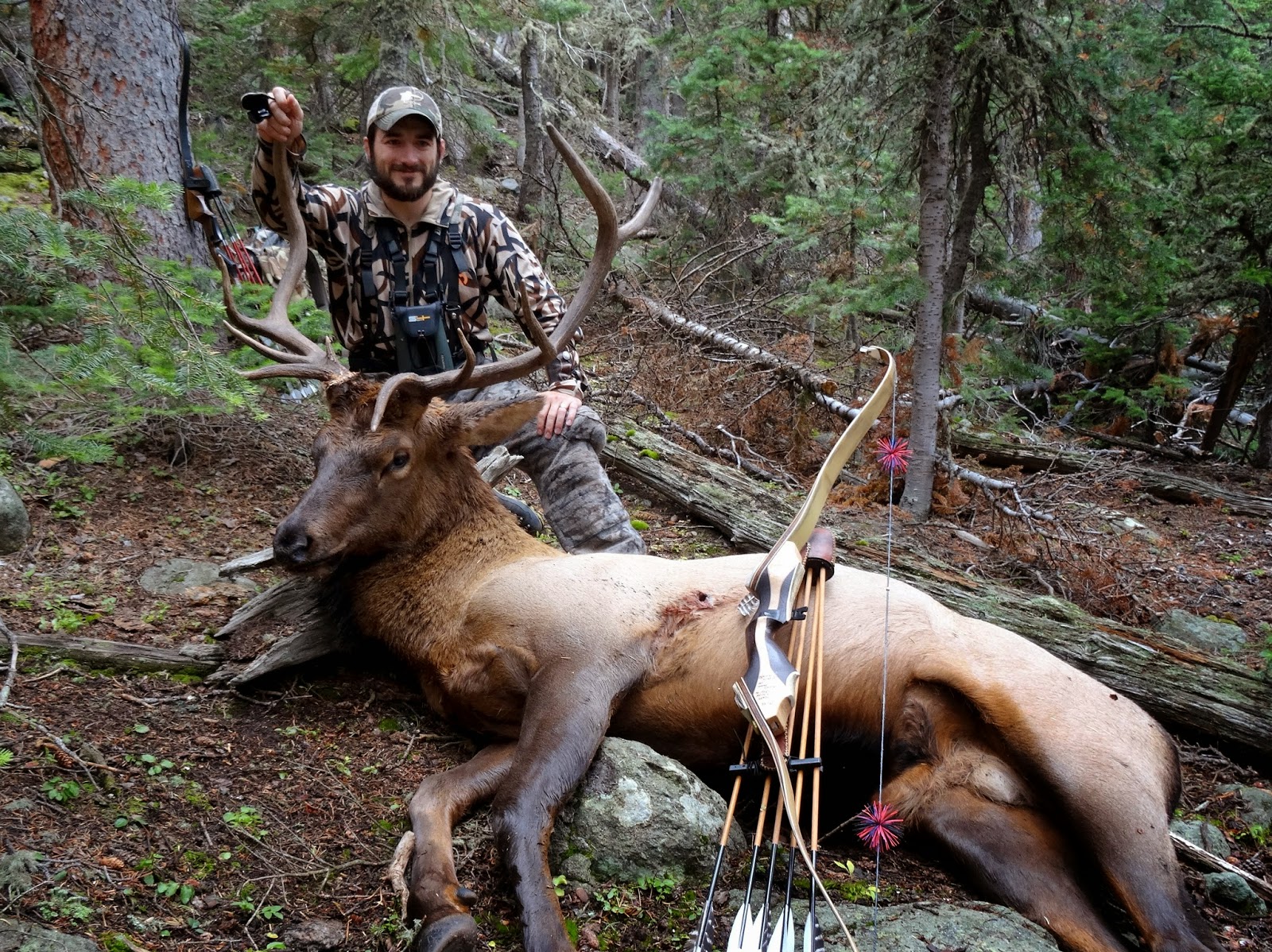 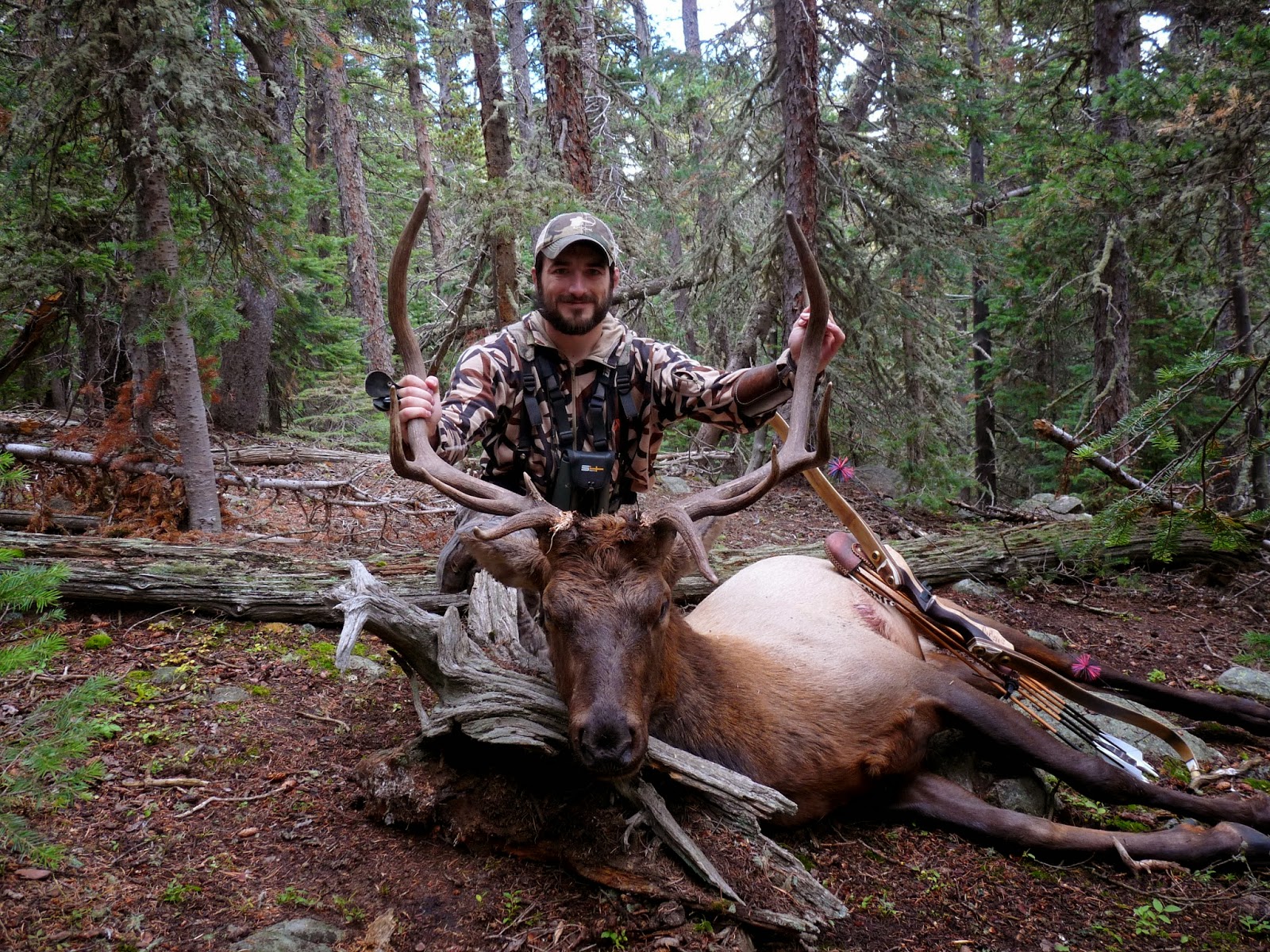 Danny, Chad and me. 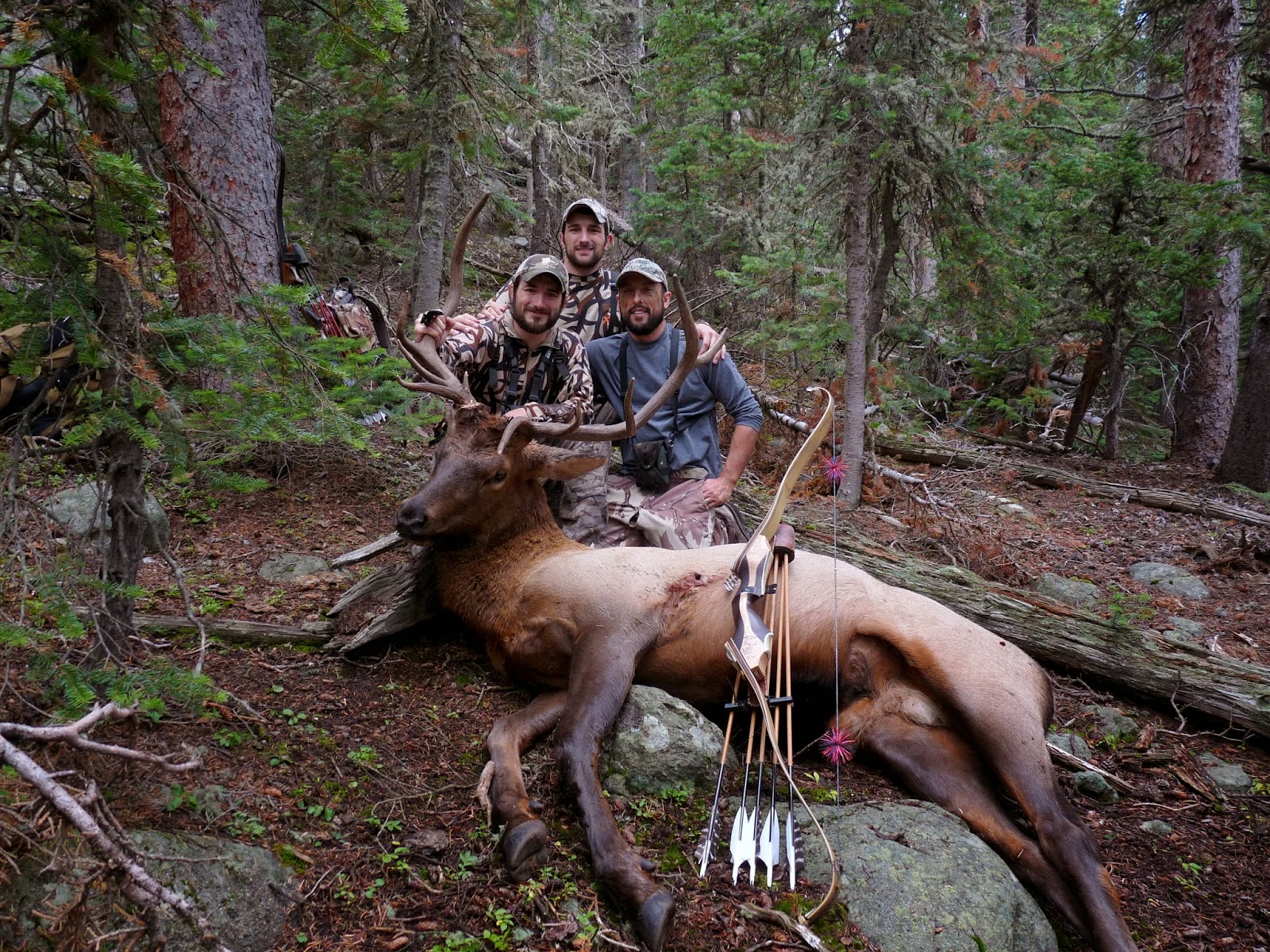 A bone-in hind quarter and the head on my Kifaru. Easy as pie. 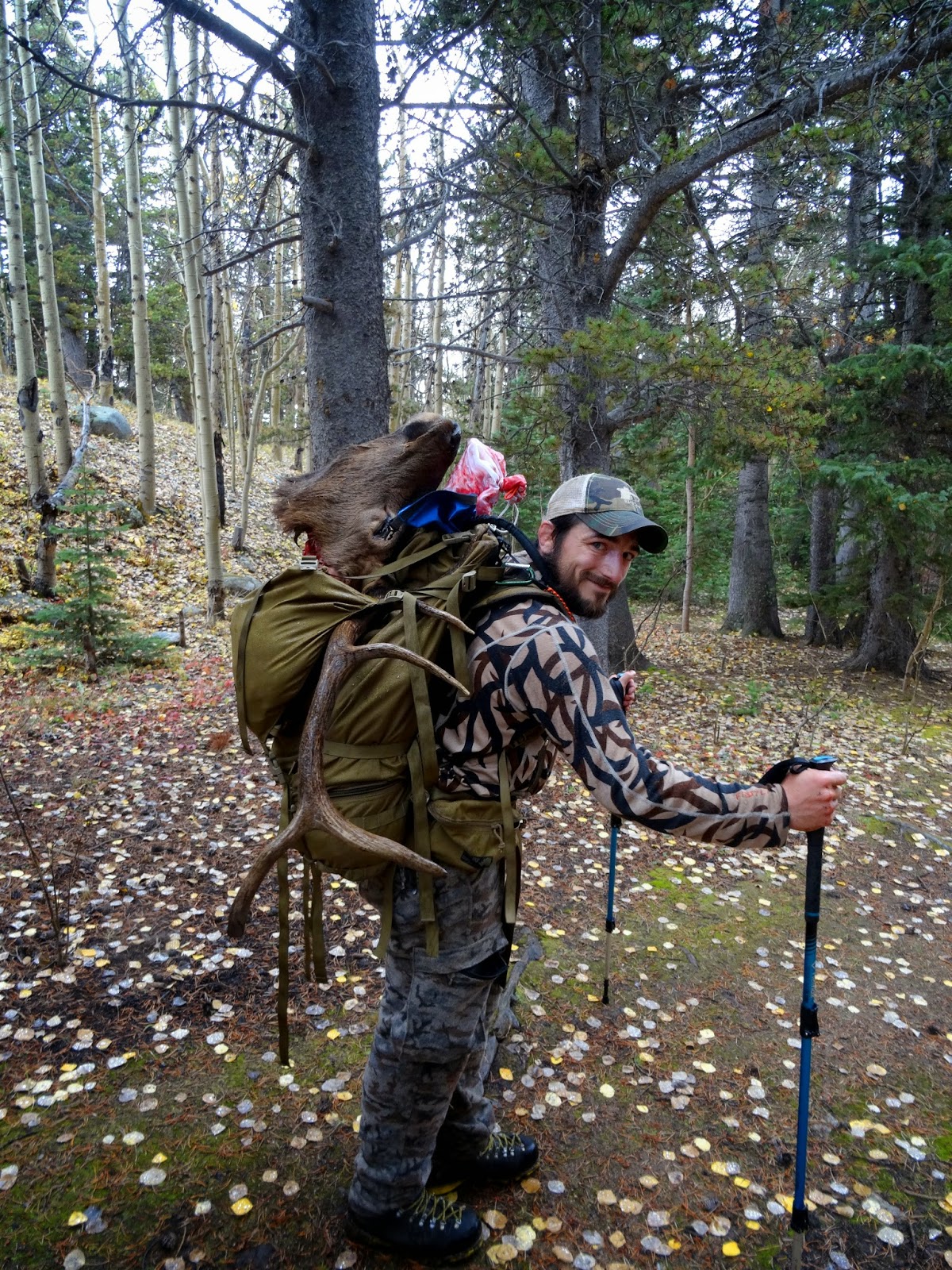 The elk action slowed down for a few days before picking back up in force. The last few days of the season were everything elk hunting should be. Danny and Chad saw two different fights, tons of incredible elk behavior, and heard non-stop bugling. Chad had his chances, he's as good as anybody in the moment of truth, but it didn't happen this year. 11 more months...dang it. The pain will go away a little bit once I get into the whitetail woods next week. Good luck to everybody this fall.