Here's an elk story from our friend and hunting partner, Del Jolly. Del is hell on elk, and he shot a great bull this year, again, in the first few days of the season. Here's Del's story in his own words: 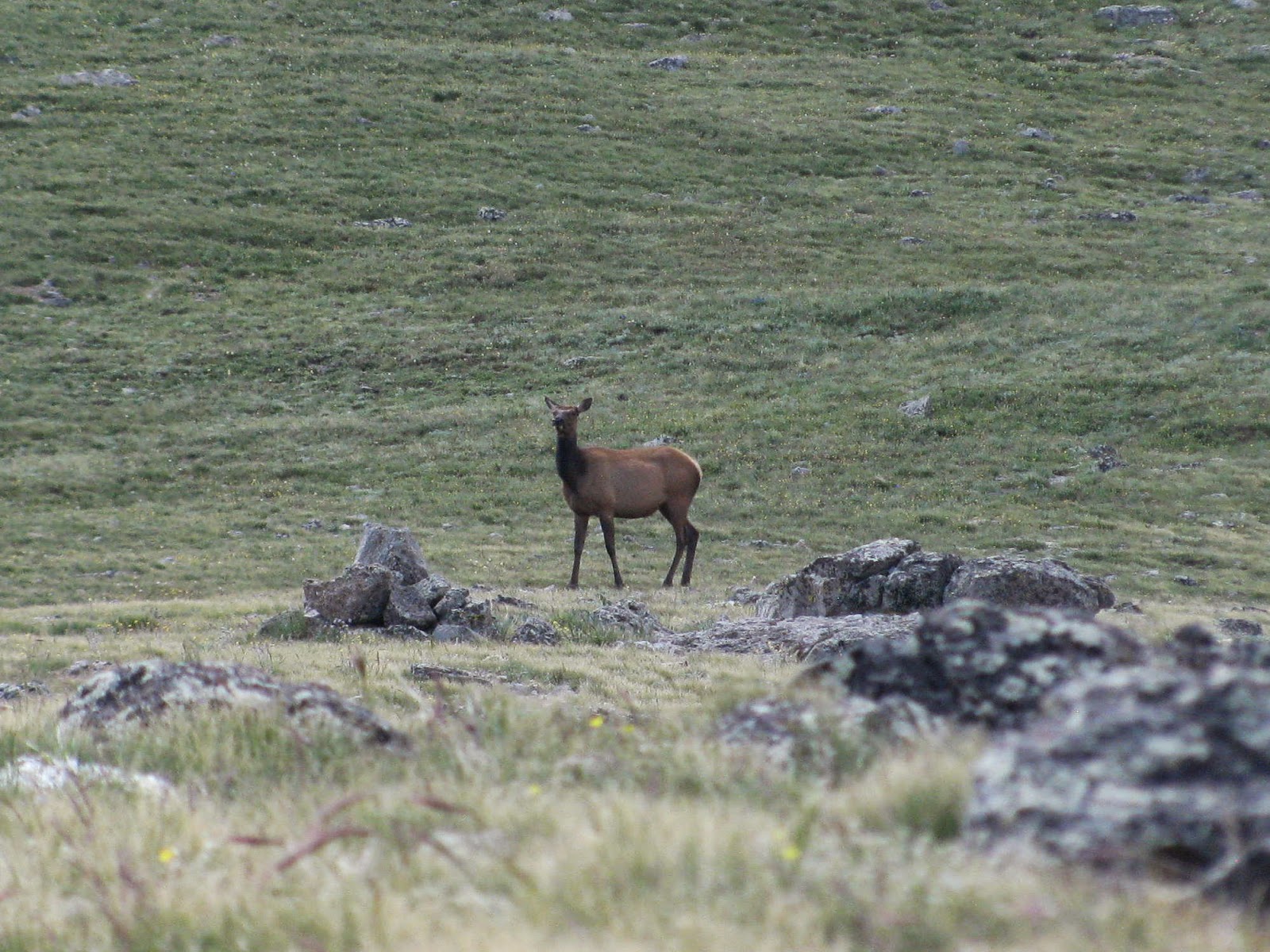 This year I was lucky enough to draw a great tag. I have never had much of a desire to hunt a trophy unit, but with a large accumulation of points, and my hunting partners drawing elsewhere, I thought I'd put in.

My early scouting trips got me pretty excited. There were elk everywhere! I usually hunt with llamas, but my good friend was using them on the opener, so I was living off of my back for the first week of the season. I packed about 2 miles into the Weminuche Wilderness. When I got to timberline I heard a big bull let out an awesome bugle. Nothing like hearing a bugle the day before the season starts! I watched that bull come up the mountain with about thirty cows. I thought it was a bit strange that he was herded up so early. I paid no attention and got to my pre-planned base camp.


A few elk from one of my scouting trips. 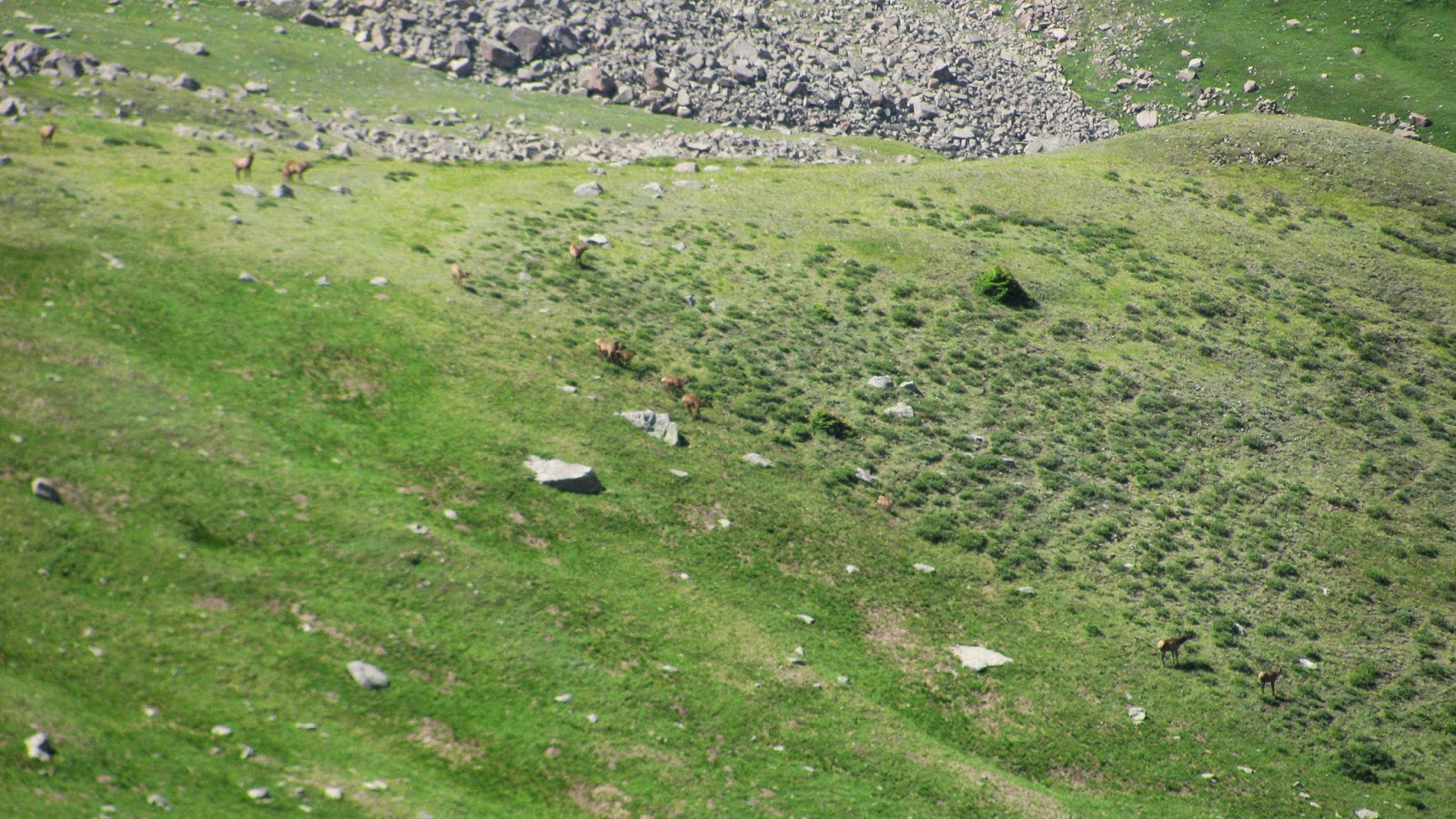 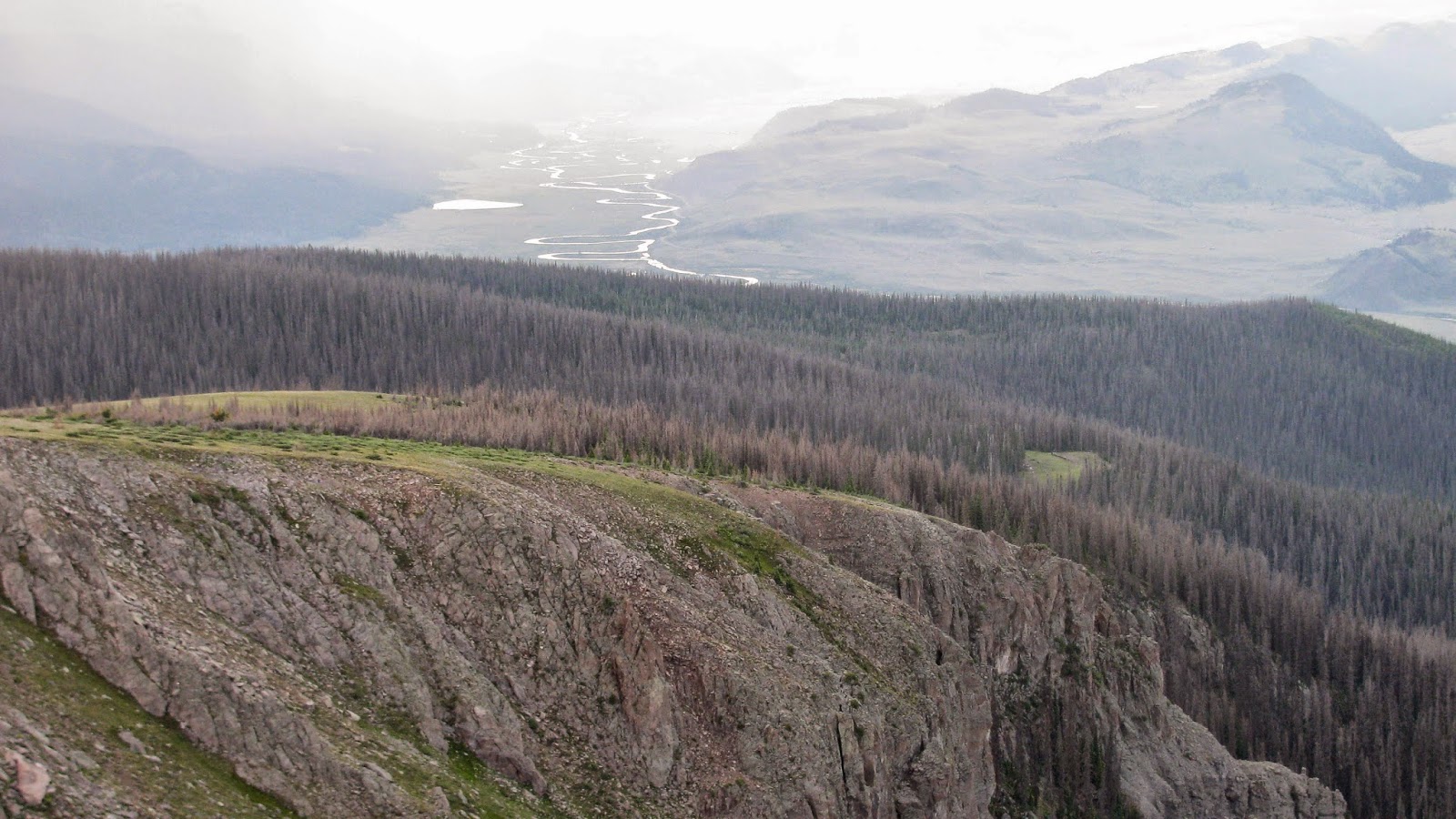 Do you know anybody who has ever found a dead mountain lion in the woods? I found this cat on the way into one of my elk hunting spots. 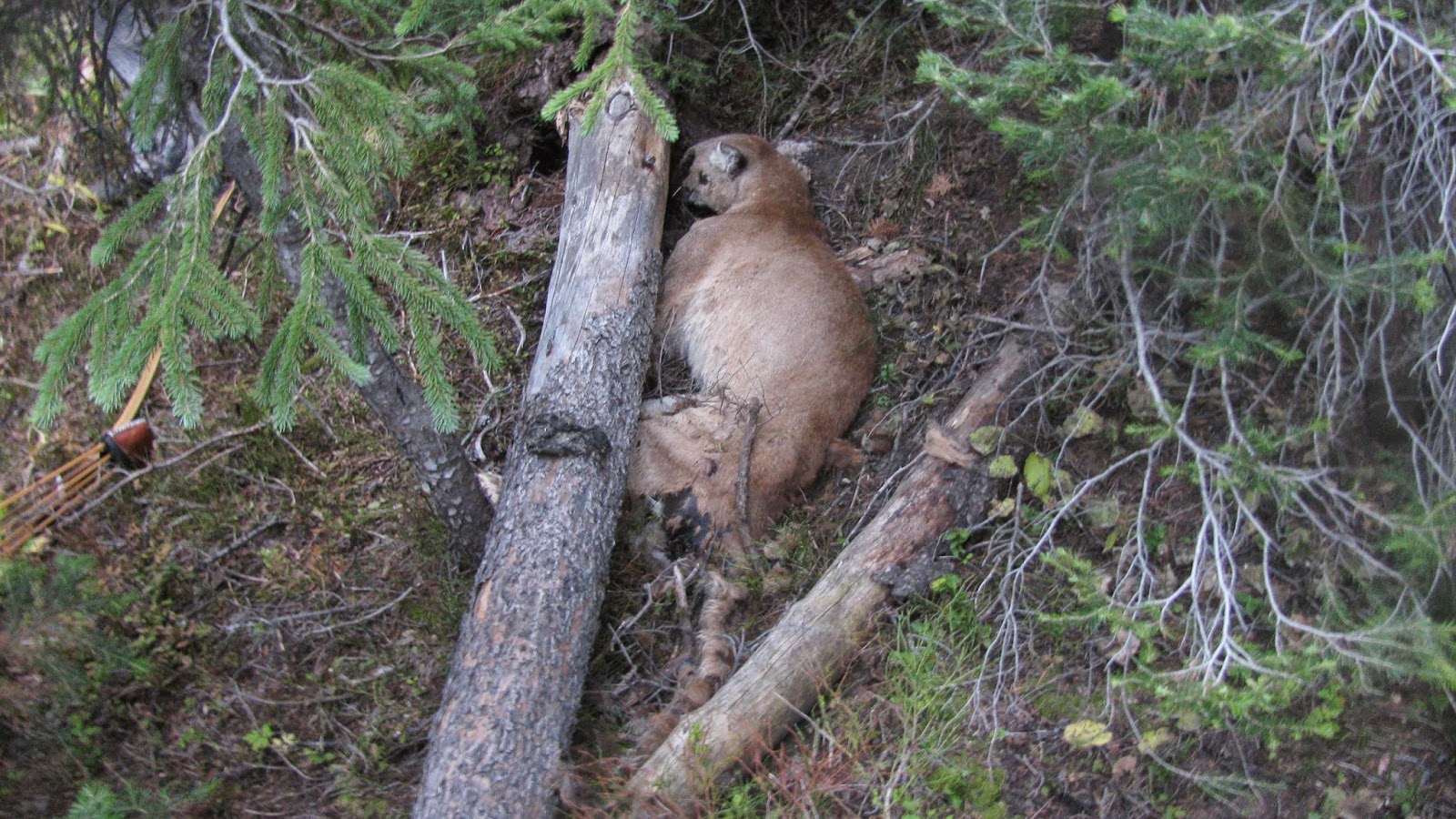 The next morning was amazing. I got into a ton of elk and had tension on my string two different times. Once, I got to within 10 yards from the biggest bull I've ever seen, up to that point. I worked very hard to go straight up a mountain just to be pinned between two trees and this bull. He came in bugling and stopped just ten yards away, but through a bunch of branches. I knew he couldn't see me so I started to rake the heck out of a tree. He proceeded to do the same. I stopped, got my bow up, and waited for him to emerge. As he started towards me, a soon to be re-occuring theme happened - the wind hit the back of my neck. Little did I know, this would be the first of many times that I would be within 40 yards of good bulls and have the wind blow it, literally and figuratively. 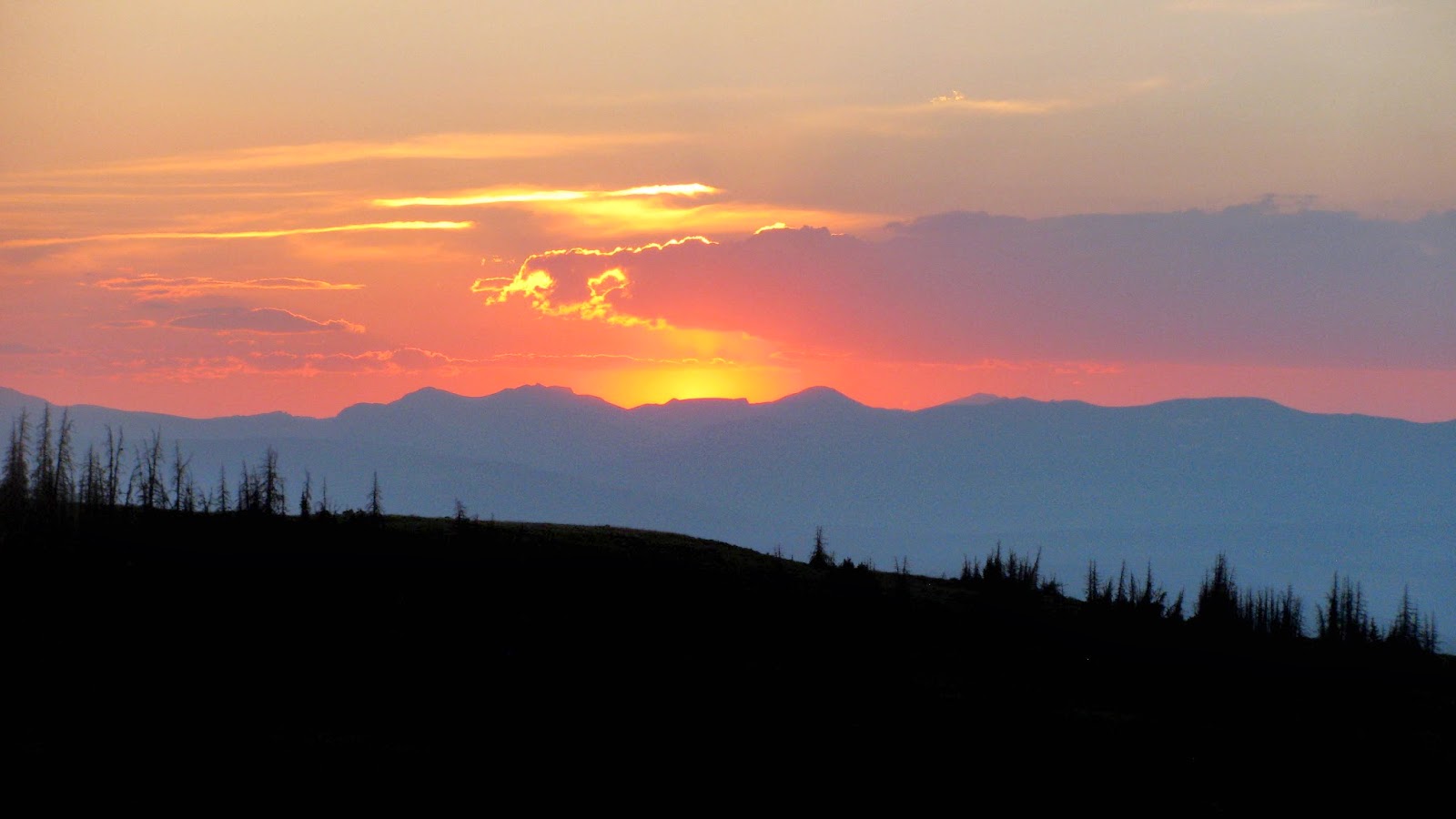 As the days passed, and the wind kept taunting me, frustration started to settle in. I decided to leave the bowl I was in and hunt another area. I went to a burn area I had scouted earlier in the year, I was immediately into elk.

The next morning I bugled at the top of the burn and had an immediate response. It was very far off so I started towards the direction of the bull. I had not traveled more than 100 yards when I spotted a cow heading my way. I was in the middle of these blackened, toothpick trees that had no horizontal branches. But as luck would have it, my back was almost directly against a tree and the sun was out of my eyes. A herd followed that lead cow, and a good 6X6 was in the rear. I always like it when cows pass by first, it gives me a chance to see where my possible shots might occur once the bull comes through.

As the elk filed along I saw a small tree that would give me the cover I needed to draw my bow. The bull followed suit, and I thought for sure that this was going to be the end of my season. I watched in dismay as my arrow flew just under the bulls chest. The herd erupted in a cloud of ash and dirt. I believe I misjudge the distance due to the openness of the terrain.

The next morning I was greeted with a throaty growl that only big bulls make. I cow called and two rag horns came running right to me. The raghorns ran into thirty yards before they caught my wind. The commotion drew out a massive bull, the biggest I've ever put my eyes on, and he was MAD! He screamed and started heading straight to me. He was coming down the same line as the raghorns. I knew I had to do something before he hit my wind. I made my move and dropped to my knees so I could shoot under some branches. Right as I reached full draw the bull pegged me. I could feel the wind hitting my back. I knew it was now or never, and forced a shot faster than I like. I was sick to my stomach as I saw my arrow fly right over his back. In my haste I didn't pick a spot.

I was dejected. In the past 24 hours I missed more elk than in my whole hunting career (with a trad bow). Two great bulls, one of them the bull of a lifetime. I was looking for my arrow when a bugled popped off several hundred yards away. I did my best to shake off the miss, and started working towards the bugle.

I closed the distance as fast as I could. This bull was a little bit more leery. He came to within 50 yards several times, but since he never saw another elk, he wouldn't commit to coming any closer. As he turned to leave I opened up my Montana Decoy and moved in on him, I felt I had to take the chance or the bull would be gone.

With a swirly wind, and the bull at 50 yards I held up the decoy and moved to a better position. The bull saw me moving and started walking towards me. It seemed to work!

I set the decoy down and got ready to shoot. I stopped the broadside bull with a short call and let go of my arrow. I saw my arrow in flight for a short time, but lost it when it hit an overhanging branch. Since I wasn't 100% sure of the shot location I waited a full five hours before beginning my search.


The bull was in the center of this frame when I shot. 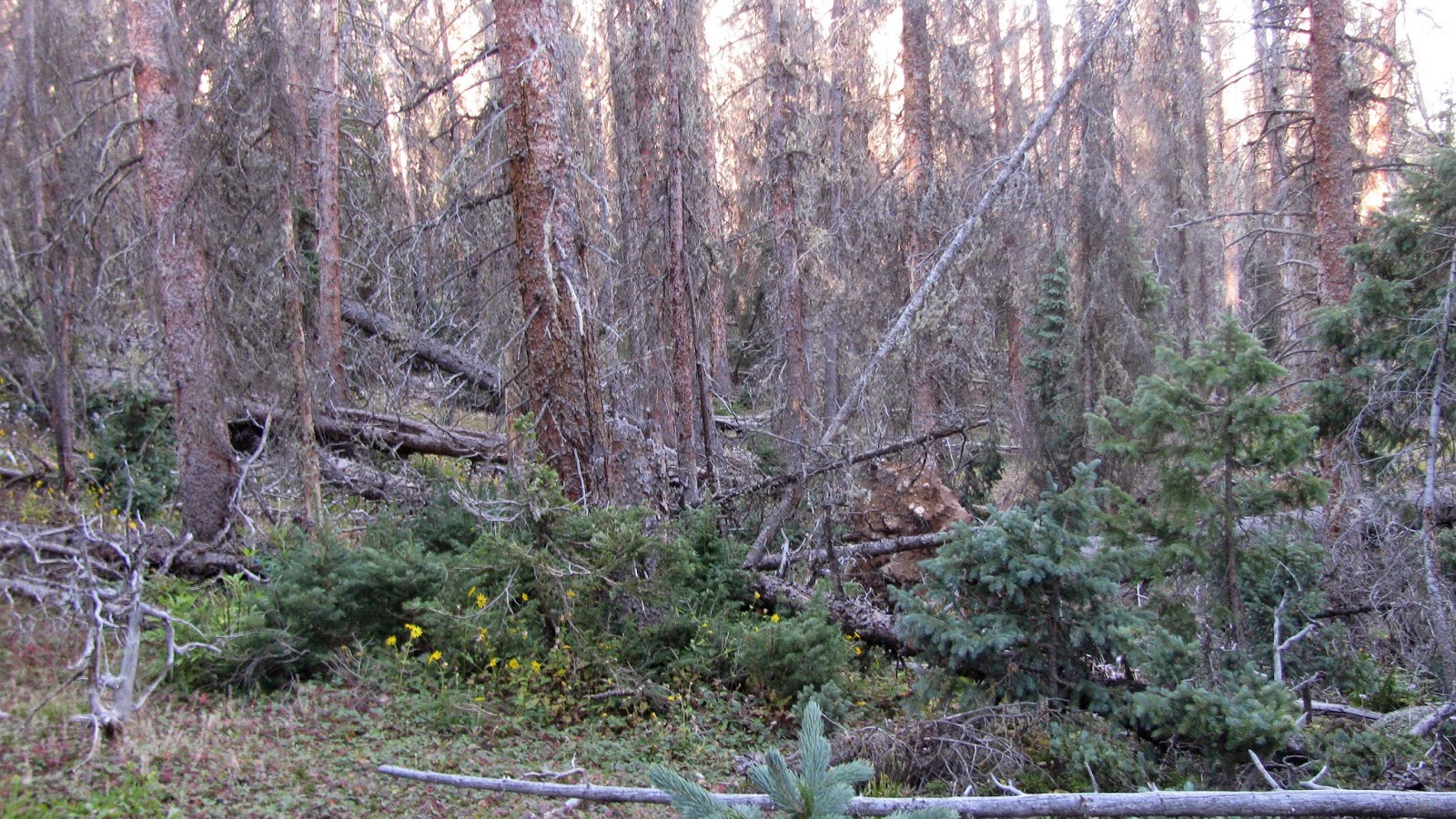 I started to get a little nervous as the blood trail dwindled down. Then I experienced one of the strangest things that has ever happened to me in the woods. A small hawk swooshed right by my head, startling the heck out of me. The hawk landed thirty yards below me and started to bob his head at me. Then he turned to his left and bobbed his head three times. The hawk flew straight at me, again, I took a step back because he was coming right for my face, only to make a sharp turn five yards from my head, and then he was gone.

As silly as this sounds, I felt that the hawk was telling me something. I walked down to the spot where he landed and looked in the direction that he pointed. Sure enough, there was my bull! 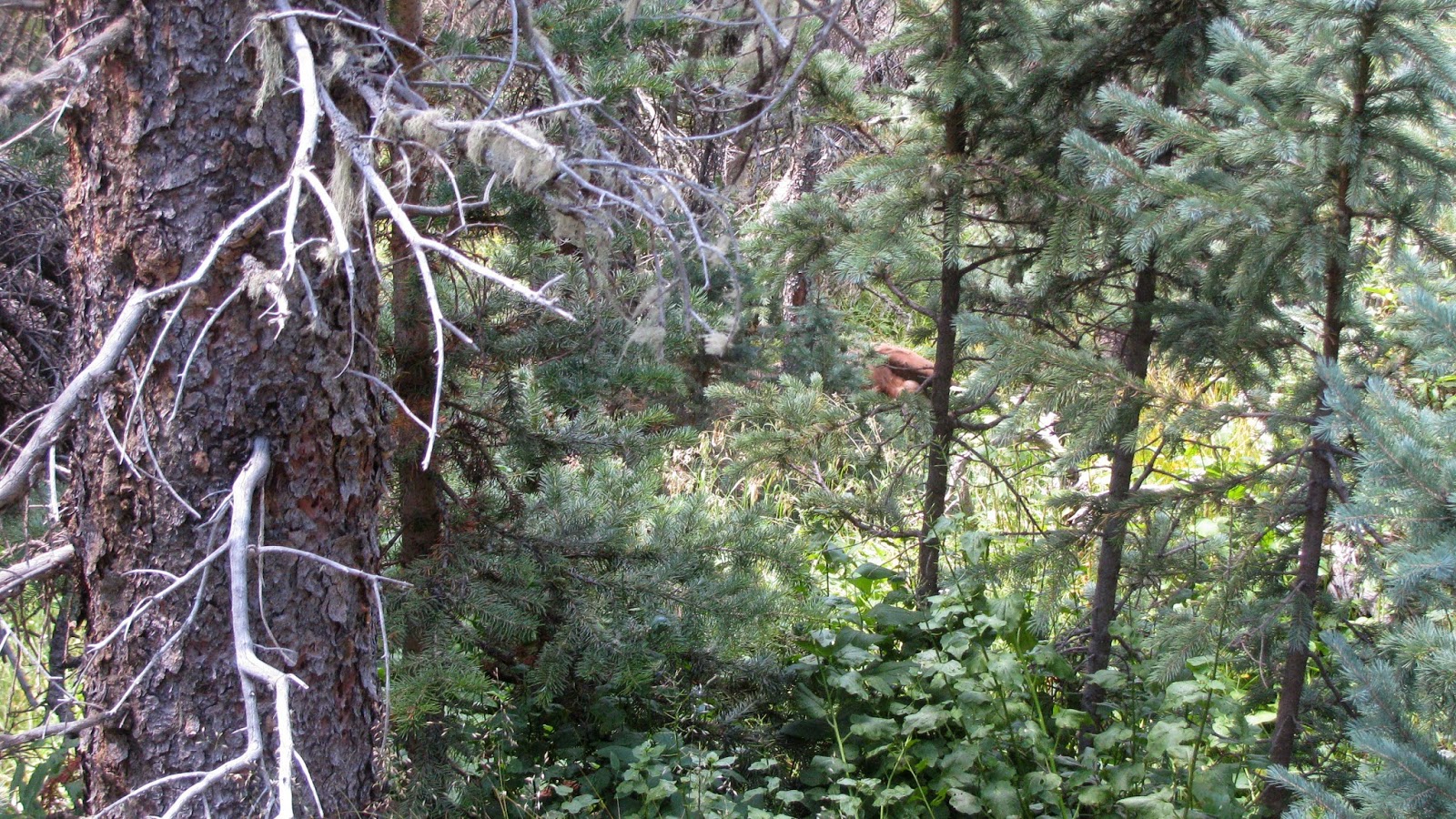 The bull was a decent 6X6, and my second biggest to date! I was very grateful for the experience. The elk action, and the close encounters with big bulls, will make this a very painful 11 months as I wait to do it again. 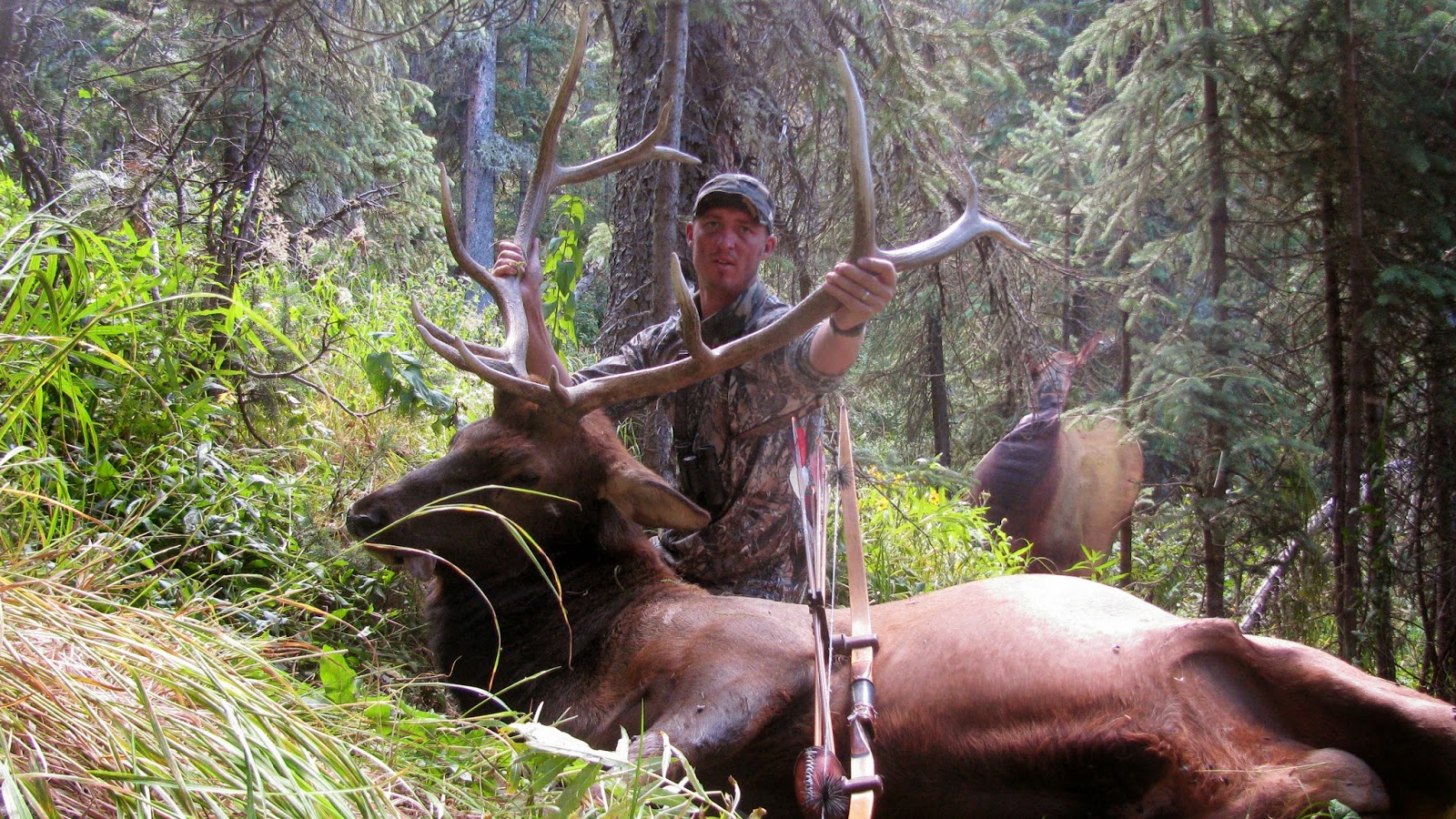 I shot this bull with my 48@28 Spirit longbow, Carbon Express Heritage arrows, and VPA Terminator broadheads. I do not think that I would have killed this bull without the Montana Decoy.
Email ThisBlogThis!Share to TwitterShare to FacebookShare to Pinterest