My cousin Chad is a killer. Not only is he a good hunter, but he is a good enough shot to prove it. After killing a beautiful bull elk in Colorado, Chad devoted his time to hunting for a nice mule deer in his home state of Nebraska. Here's Chad's story in his own words...

This year Blake and I decided that instead of targeting whitetails, we would spend October hunting hard for a big mule deer. On our first morning hunt of 2013 we checked in on an old haunt that has never failed to produce a handful of mule deer.

As the sun rose we began to see deer, one in particular had a much larger body than the others. It was dark enough that the size of his rack was not obvious, so we got out the spotting scope to get a better look. My heart began to race as the scope focused on his rack. Blake had a quick look and said it was probably the biggest deer he had ever seen in Nebraska.

We moved in on the deer and got ourselves set up. Long story short, the buck crossed 50 yards ahead of me and went directly towards Blake. Minutes later I watched the buck trot away, shortly after that I see Blake dig his arrow out of a dirt bank. His bowstring caught his sleeve and his shot fell short.

That night I watched the buck lay in a pocket until dark with deer on all sides. The next morning we were back and saw the deer cross another wheat field. There was no pattern to this deer’s movement. We decided to make a move, hoping to catch him coming off the wheat field. When we got to where he should have been he was nowhere to be found.

After that morning it was three weeks of hard hunting with no more sightings of the buck. Blake and I were obsessed with finding the deer. Between the two of us we spent no less than 25 days looking for him. We had found every other buck in the section but not him. There were regularly several different trucks slowly driving the outskirts of the property, I was sure the deer had been poached.

My son helping me look for the big buck. 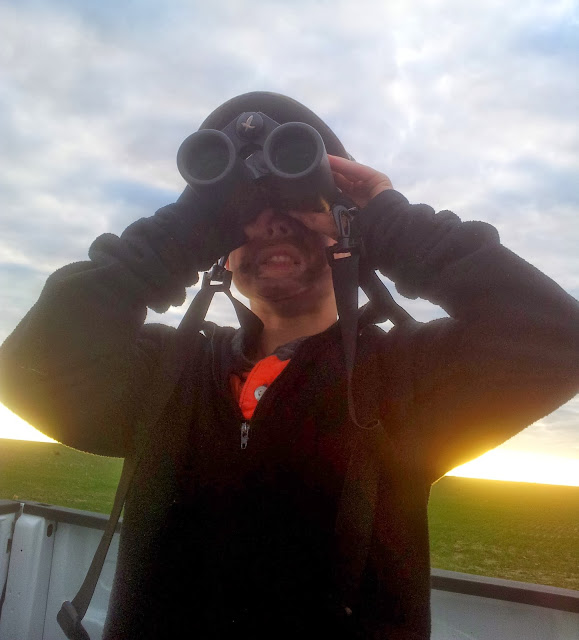 As luck would have it I had a work appointment cancel on the coming Friday, so I went out Thursday night after work to hopefully find the deer. I didn't see the buck we were after but I did see 20 other mule deer. I also found the deer’s water source, a pond we had assumed was dry. I noticed a perfect way to get into the area without being detected. Friday morning was a south wind so I made my way to the pond from the north and set up on a hill above.

As the sun began to rise I saw a white patch in a thicket, close to a mile south. I was watching deer in several other areas but I had a feeling about the white patch, so I kept panning the spotting scope back to the spot. The sun finally rose high enough to hit the thicket and, much to my pleasure, I see it is the buck we have been after.

I watched in amazement as a 2 point whitetail dogged a mule deer doe all around the big muley buck. I looked at another group of deer, and when I panned back the whitetail was on a hard run, the big muley buck was now standing with the doe. The deer began to move north, in my direction, and then went out of sight. Before they disappeared I noticed two small whitetail bucks moving just ahead of the big muley.

I hustled to the bottom of the canyon and stealthily worked my way towards them. I slowed down as I got near the area I had last seen the deer. Good thing too, I got lucky to spot those two whitetail bucks before they saw me. They were on the same cow path as me. If they spotted my they would surely blow back up the canyon and spook all of the other deer. The next cow path over was about a foot deep so I rolled over into it, and laid down flat. Both bucks passed by me at 4 yards.

Here is a video I captured of these two little bucks that almost ruined the entire hunt.

Once they left I continued up the canyon. I noticed 3 does head up into a pocket to the west, but no bucks followed them, so I kept going. I was one ridge away from the last place I saw the buck when I caught movement above and behind me. A 2 point muley had me pegged. To make it worse the big buck was feeding in the field just beyond the 2 point. After a long stare down the 2 point went back to feeding, but the other deer had moved off.

A view from the spotting scope the morning I killed the big buck. 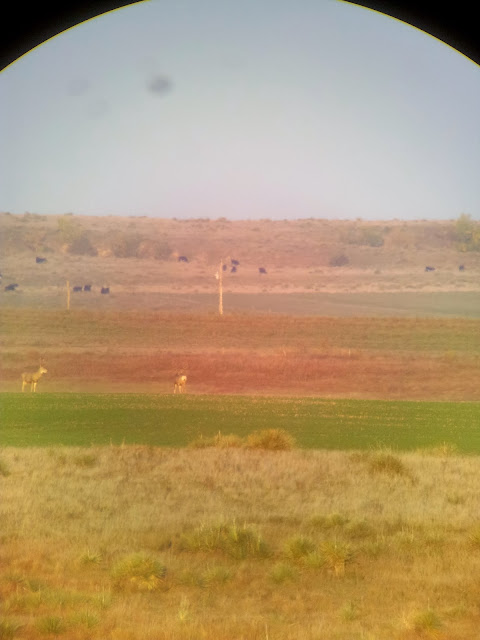 I circled back around the hill and followed the draw in the same direction I had seen those two does go earlier. I had to crawl the last 75 yards as I could see the backs of several feeding deer just 20-30 yards beyond the fence. I was in a good spot in a deep cow path, along the fence and out of sight. The deer were now on the neighbors property. I figured that I would have to come back that afternoon in hopes that the deer would come back onto the property I had permission to hunt.

The big buck I was after was feeding just 20 yards away and I had a clear shot. As I watched the big buck I prayed, please Lord let that buck jump the fence.  Even though I was very tempted, I made the decision not to shoot across the fence. The second I made that decision the buck turned and headed straight towards the fence line. I could not believe it.

As he got to the fence, 25 yards away, he stopped and looked directly at me. I thought the gig was up. After a long stare down the deer jumped the fence, but when he stopped I was waiting at full draw. He was 30 yards away and up a steep hill. I watched my arrow disappear over the grass between us. Then I heard a thud. The buck bolted over the hill and out of sight. I ran to the top of the hill to see where he went, but it didn't matter, the buck was already laying at the bottom of the canyon. I felt blessed to have had such an amazing opportunity and to have made a good shot. 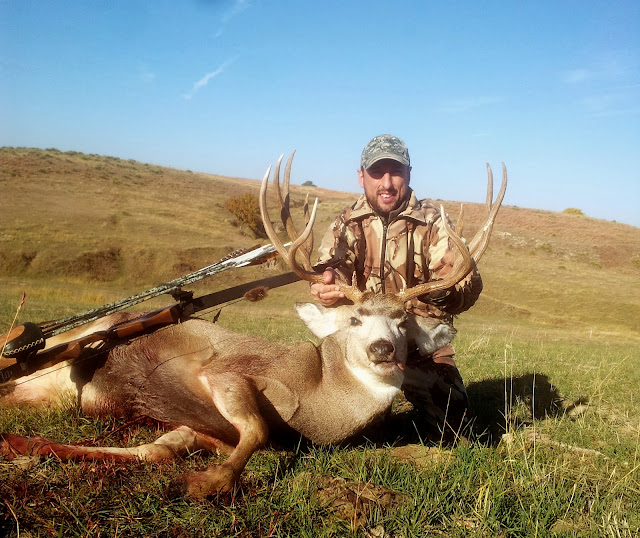 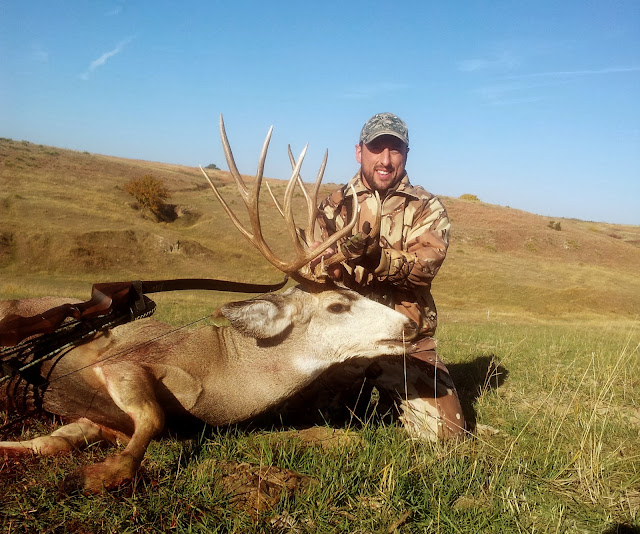 My Magnus Stinger did a good job on this big bodied mule deer. 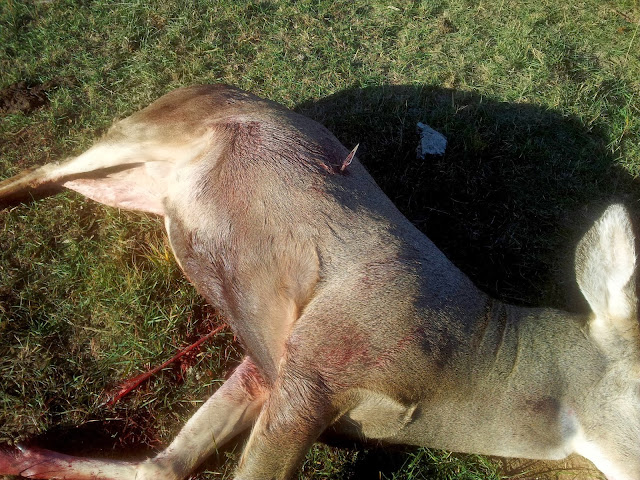 The second bow I ever built was a gift for my cousin Tommy. Tommy is starting to get a little weak, so he sent me the bow to have a set of lighter limbs made. Since I had the bow I decided that I might as well kill a few deer with it. I built it, after all.

Growing up as kids, Tommy and I would always make one arrow for the other. That arrow became first in the quiver. I shot my first mule deer with an arrow that Tommy made me. We have always enjoyed doing little things like that, so shooting this deer with Tommy's bow made this deer just a little more special. 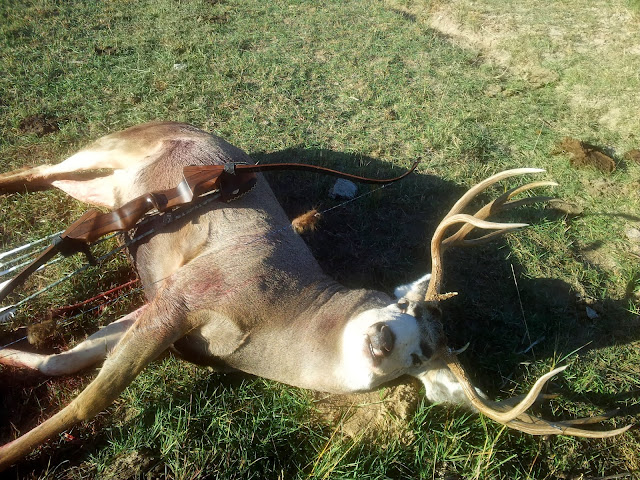