We have experimented with different heads for turkeys over the years and talked to many hunters about what has worked for them. The purpose of this blog is to share my favorites and observations as to what is best for the traditional bow hunter.

I have been really lucky to not have lost a bird "yet". I have been on many unsuccessful searches for lost birds and have heard many heart breaking stories about hard hit turkeys that were never found. One key to success that I have consistently found is that if the arrow is still in the bird the chances of finding that bird go way up. It is a lot harder for a bird to effectively burrow/hide when he has a protruding arrow slowing his progress. For this reason, my favorite broad head is a large four blade from any maker, with the cutting edges of the bleeder blades ground flat. The large main blade is of course made razor sharp. In this manner the arrow is much less likely to just zip through the bird. The flat ground bleeder blades really slow the progress of the arrow, and most of my birds hit like this have had the arrow half way out either side.

My equal favorite has come to be the Magnus Bullhead. The Gobbler Guillotine I am sure is just as good or better, but without an effective carrying system. And with the need to put the little straws over the blades they are not as convenient in my opinion. I think it is at least as easy, and maybe easier, to hit the head or neck as opposed to the softball sized kill area in the body of the bird. The huge benefits to the Bullhead in my opinion is that the bird is either dead right there, or just fine. My son and nephew have both shot low and body hit Tom turkeys with these Bullheads. In both cases the birds were rolled over and ran off. One was seen strutting within minutes and the other the next day (he was identified by an unusual tail feather). I am quite sure this doesn't do the turkey any good, but it seems preferable to a poor hit with a broad head. The common misses that are high, left, or right obviously are great because they only hurt the pride of the hunter (and maybe the bird). So small misses in three of the four directions definitely do not result in a wound, and the low misses probably do not have long term effects.

(Tommy Clum shooting the Bullhead on a mountain turkey)

Now, for my thoughts on shot placement. For me, it is really, really hard to ensure the "shot placement" that you prefer on an animal the size of a turkey with a longbow or recurve. An inch or three really makes a difference. However, the one consistent factor that makes the most difference is which way the bird is facing. If the bird is facing toward you, or away from you, the fairly flat rib cage (and lung area) of the bird will be most exposed to your shot. If the bird is broad side, the lungs are a thin slice facing the wrong way. Think of a slab that is 4" x 4" x 1" turned thin ways toward you. Then think of this same slab with the flat side toward you. From my observation a turkey hit in the lungs will go down right away. A turkey shot in the breast or other areas will be hard to find. 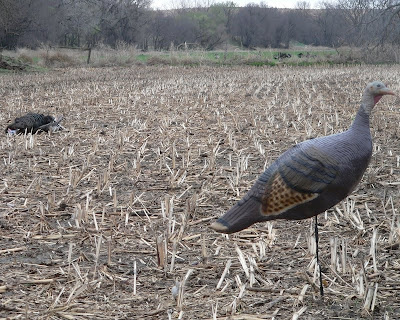 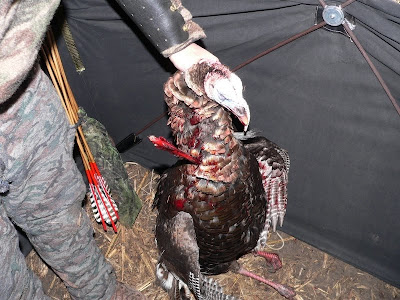 (Another frontal shot that resulted in immediate death) 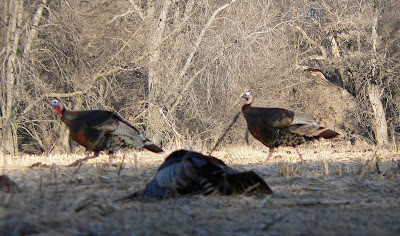 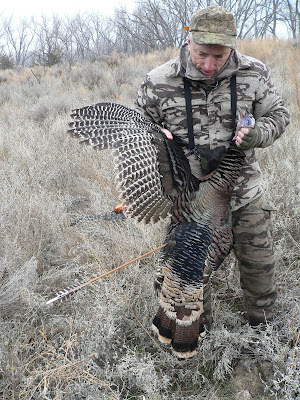 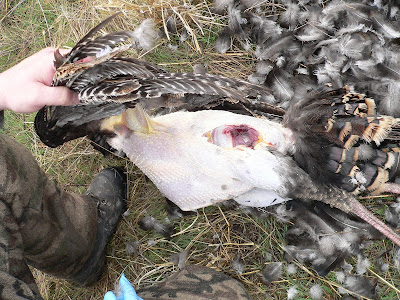 (exit hole in the breast, with finger pointing to entrance hole) 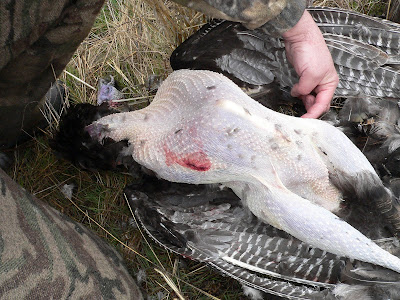 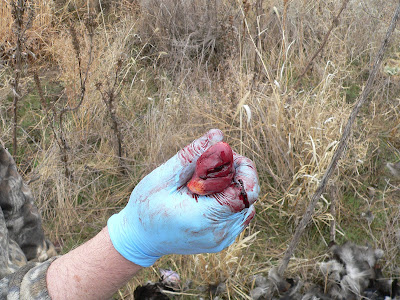 I hit a turkey broadside, right in the middle of him, and the arrow stuck in the breast bone. Fortunately the arrow did not pass through, and the protruding arrow prevented the bird from getting deep into the brush. We knew where the bird ended up by the terrible noise the other birds made while harassing their poor wounded comrade. We gave the bird 45 minutes then started our search. We went to the area 75 yards away, where all the commotion was coming from, and found the bird stuck under a tree where the arrow prevented him from burrowing further. I was shocked to see that bird get out of there and take off running again. My friend John, my son Tommy, my son in-law Kelly, and I were in hot pursuit and finally were able to get another arrow in that bird. Luck was on our side. First, the broad head stayed in the bird, and second the vocalizations from the other bullying birds gave his location away. We have found birds that left a blood trail I wouldn’t mind seeing from a deer, we have found birds by dead reckoning, and we have found birds by pure dumb luck. Persistence along with luck many times pays off.

Now, I have a short word about shooting timing and tactics. I have noticed that when the bird hears a stray yelp, or sees or hears something he doesn’t like, he will stick his head up alertly. I have used this moment to my advantage a few times. Once I caught a huge Tom just over a hill from me and he was in the middle of a bunch of hens. When I peeked up over the hill with the arrow nocked and tension on the string, I got the shot off during that time when he stuck his head straight up and was thinking “what the heck is that” and obviously just before he started his sprint.

Another time I was in a blind with Danny and waiting to get a shot at a nearby Tom. I had a Bullhead on the end of my arrow. The bird was walking and jerking his head back and forth. I came to full draw when he stopped, but he started walking again. As I was following him while aiming at full draw, I was twirling a diaphragm in my mouth to make a yelp. When Danny noticed that I was full draw, he came to my rescue and let out a couple of crisp yelps and that Tom stuck his head up to listen. With that bright red head sticking up and catching my full focus, I let fly and that Bullhead smacked him right under the chin. He was 23 yards away and he hit the ground like someone dropped a sack of rocks.
(Where the bird lay, 23 yards from the blind) 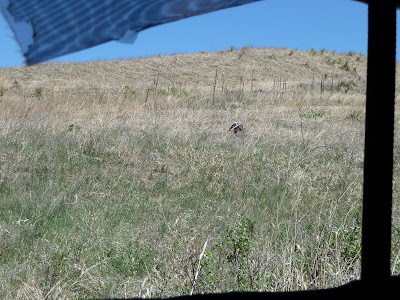 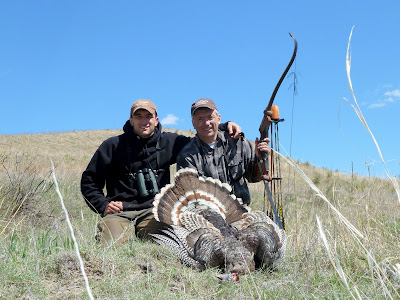 If you are ready, you can actually be seen or create that two seconds when the head goes up and the bird is standing still, to get a perfect shot opportunity. Use a yelp in the same manner a hunter grunts at a deer or mews at an elk to get them to stop.

A bow hunter can get a good shot even when a bird is facing him (and I sure like that angle as described above). If drawing the bow catches the attention of the tom, he most often will stick his head up in alarm. This is the time. Take advantage of this great forward on angle (when the bird is facing you), in the short window of opportunity created by your movement and just before the bird hauls tail out of there. Watch any turkeys that accidentally get a glimpse of you. Unless you really blunder into them, they usually stop what they are doing and stick their head up to assess the situation. You will notice that they check things out for about a quick count to three. Just enough time to draw, aim, release, and provide your family a great turkey dinner. 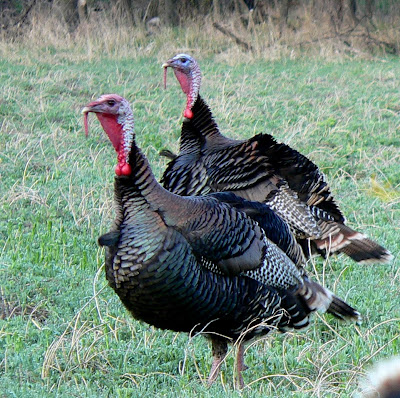 So in sum, I like a big 4 blade broadhead with the bleeder blades ground flat, or a Magnus Bullhead. I like shot angles that have the bird facing to or facing away from me as opposed to broadside shots. And I take advantage of the short shooting window that turkeys provide through their natural inclination to stop and stick their head up before bolting. These things have served me and my boys well in our experience (about 15-20 bow kills between the three of us).