Here are some pictures from the last few weeks of turkey hunting. After a rough first few weeks of weather we finally caught a little break. It was still raining part of the day while we hunted but the birds were much more responsive.
Danny has been using the Magnus Bullhead this season, and after a few near misses he finally connected on a jake. 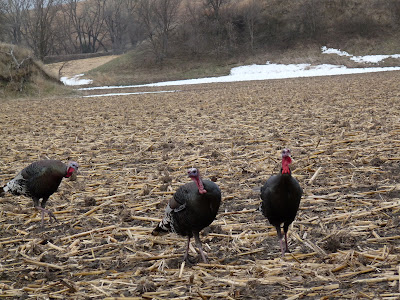 You can see the down jake just beyond the decoys. The Bullheads really work! This jake did not travel two steps from the shot. 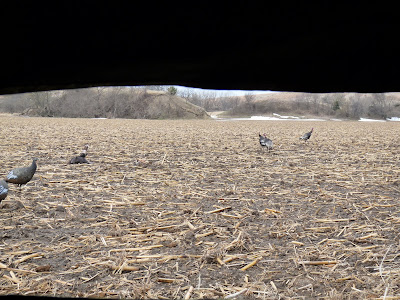 The other jakes stuck around after the shot and even came back to the decoys, if Danny had bought two tags he could have had a chance for a double. 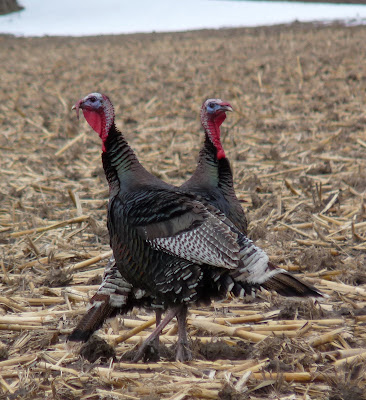 Danny used a Rampart longbow and a Magnus Bullhead to take this Nebraska jake. 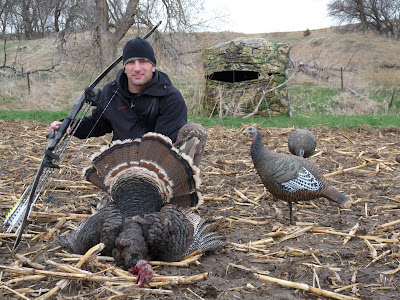 I personally got a little redemption after I missed a chip shot from a few weeks before. I was hunting with my brother-in-law Kelly. We were not very optimistic for this evening hunt and decided to flip a coin to see who got to be the shooter in the morning, which we figured would be real good. I lost the coin toss for the morning, but it turns out I was the big winner. This tom came in spitting and drumming and gobbling his head off at 6pm. We don't often get toms to commit like this that late in the day. He was making a b-line towards our decoy when I started my draw. He either heard or saw me start to draw, and as he started to move off I hit the exact feather I was aiming at. I shot him with a Hawk recurve, and a Simmons broadhead. He did not travel 75 yards before expiring. 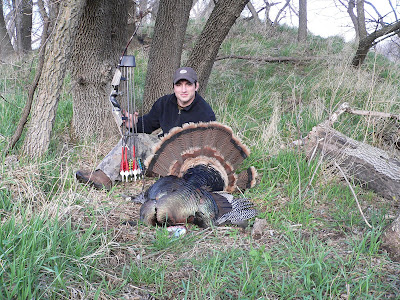 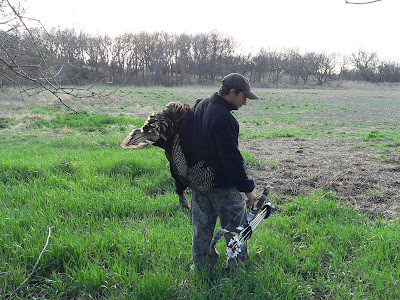 The next morning Kelly was up to shoot. After watching no less than 50 turkeys, and 10 big strutting toms enter the field we were sitting by a group of three jakes came to check us out. Kelly made a perfect 20 yard shot. We had friends from Wisconsin at the other end of the field with many hens around their decoys, and toms fast approaching. After Kelly shot this jake he flew over all the turkeys and essentially cut them off from going to our Wisconsin friends. We felt horrible but still got a good chuckle out of the fact that it ruined their hunt so perfectly.
This was Kelly's first turkey, and second kill with a traditional bow. Kelly used his Chastain Wapiti recurve and a Bear broadhead with the bleeder blades ground flat. The turkey expired very quickly. 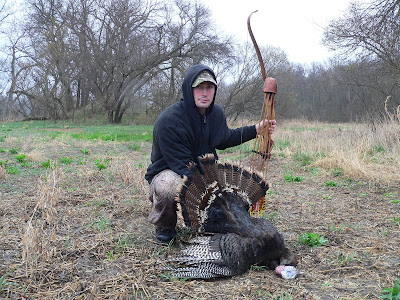 I think it is officially the smallest jake on record! But it serves Kelly right after his first big game animal was a big 6X6 bull. You can read about that hunt later on this blog. 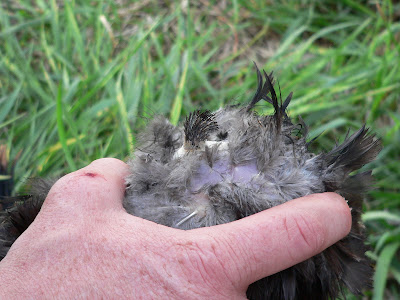 Later in the evening Kelly and I returned to our blind, which we had moved slightly after the morning. We took a lot of time brushing in the blind. We have noticed that turkeys are starting to become very skeptical of blinds in the past few years and we did not want to take any chances.
A group of three jakes spotted our decoys (which had some live hens around) from a few hundred yards away. They marched straight towards us at a fast pace. I shot this jake with a Bear takedown and a Simmons broadhead. I hit him square in the back as he was facing away, a shot that I prefer on turkeys. 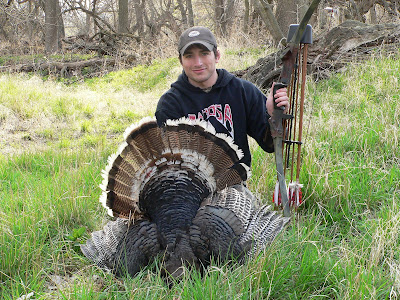 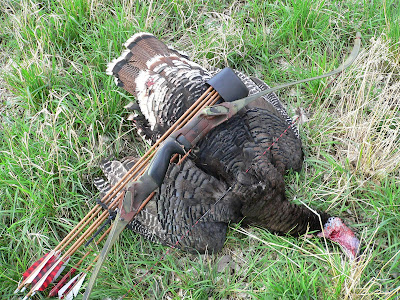 Turkeys have always been hard to hit for me. Last year Kelly was devastated after missing a few close shots. This year he didn't mess around. We took three shots and killed three birds. It was a very fun trip. 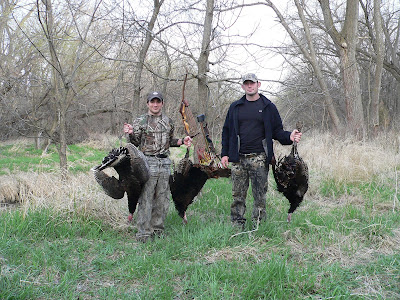 Next up, COLORADO TURKEYS!
Email ThisBlogThis!Share to TwitterShare to FacebookShare to Pinterest