“Elk Hunting”
The words “Elk hunting” conjure up a lot of different emotions for lots of different people. For some, visions of sitting around the camp fire on a cool fall night swapping stories may arise. For others the idea of squeezing off a round while shaking from excitement rather than the cold mountain air, might manifest. And for me personally, I think of hard work paying off when there’s a bull screaming 20 yards away after you’ve climbed what seems to be Mt. Everest.
Ever since I was a little kid, I thought killing a bull elk with a bow was comparable to winning an Olympic Gold Medal. My dad held a special place in his heart for anyone who has done it. The statement “Yeah, I’m sure Johnny’s dad single handedly solved the mid-east conflict, but has he ever killed an elk with a bow?” may have come out of his mouth.

As time passed I grew further away from the outdoors and further away from my dad, as many young people do. Then in 2005 I got a wonderful opportunity working for the U.S. fish and wildlife service. For one summer I captured whitetail and Mule deer fawns and studied their mortality rates in the Rocky Mountain arsenal. This intimacy with wildlife rekindled my spirit for the outdoors. That summer my dad and I trained two llamas, and decided to do a 10 day archery elk hunting trip. I ended up killing a great 6 X 6 that was big enough to make Pope and Young. When I brought those antlers into camp that night, things changed. I remember walking up to my dad who had a camp fire going and couldn’t see into the night and dropping the antlers in front of him. Now I know I could have put a cow on the ground and he would have been proud, but I just so happened to put the biggest antlers he’s seen on the ground in front of him. My dad shook my hand, said congratulations, and for the first time I felt like my dad looked at me as a man rather than a boy.

Luckily for my dad's ego he killed an even bigger bull three days later. After all, I can’t upstage my dad on my very first year. But prior to his scoring on a big bull, with the days passing and the trip getting shorter with no elk on the ground for him, the BS began. My dad let me know who had taught me everything I knew, and whos idea it was to acquire the llamas. And for this, I am very grateful.
The following year I knocked down another great bull. My dad spent a lot of his time trying to get my grandpa a bull, then he got stuck in a freak snow storm that trapped him in the wilderness for several days, so he didn’t kill an elk that year. But he again reminded me who’s who. The following year I finally became a real elk hunter. I didn’t get an elk. I had multiple opportunities, five shots in the season with three in about a half hour. I was defeated. I almost bought a longbow this year, but chickened out. I wanted an undefeated title, and looking back I may have gotten it if I was shooting instinctively with a longbow.

Enough was enough. I decided to go with the primitive weapon. I took from the knowledge my dad bestowed on me and went with simplicity. It doesn’t get much more simple than a longbow. No sights to knock lose, no peep holes to fill with mud, no trigger release to forget in the woods. None of the tons of gadgets that go wrong on the modern compound. Besides I had nothing to lose and everything to gain by going with the longbow. I didn’t have a streak to maintain, and most importantly, I would be the first guy my dad knew who killed an elk with a longbow. Then I could give him some advice on how to kill elk with a longbow.
The 2008 season was upon us, and I had my new Brian Holly Spirit longbow in hand. I had practiced religiously all summer. I was confident in my weapon, and honestly felt like I was much more capable with “the Spirit” than my old compound. Shooting through my hallway in my house every night for a month leading to the season paid off. It’s only about an eleven yard shot, but this would be of importance later in the season.

The first morning, I found myself slipping in on a large herd of grazing elk. None of them responded to my bugle, yet a 4X4 came to my call. It was opening morning and I had a bull at 20 yards broadside. But after training all year, I didn’t want to end my season on a small bull the in first hours. I have found I am a real elk snob the first week of the season.

The next morning was raining and the ground was soft and quiet. I slipped in on a bachelor group of bulls and had a small 5X5 picked out. There were more elk in the group than I suspected and I was picked off by a bull I hadn’t seen. That evening I went back in camp and told my partner, Lee, that I was going into a real hell hole and wouldn't be back for two days. I loaded all the gear I needed for my journey on my back, and left towards my spot for the evening hunt.

I camped about a mile above my spot and was awakened by the sweet sound of a bull screaming. I was hoping to get a chance at the bull by my tent because I knew what was in store if I had to go down into my spot. The bull up top was a great bull. He had about twenty cows with him and grew so big because he was wise. The hunt only lasted about 10 minutes total, the bull must have winded me. He was gone in no time and I soon found myself packing up my sheep tent and beginning my journey into “Diablo Bowl.” 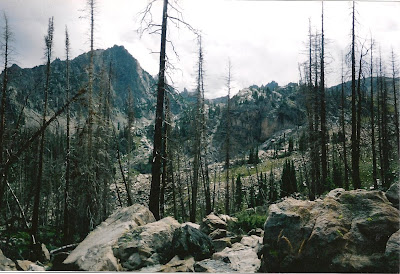 We call this honey hole Diablo Bowl because it is hell in there. A burn went through it and scorched the earth, knocking everything down. You don’t hike this area as much as you crawl it. It is hell, and that is why it is so good. As I make my way up this monster, I can smell that magic scent only an elk hunter can appreciate. The scent many of us wish could be converted into a air freshener, that we can smell it when we need an elk fix. A smell most people would quickly run from. I let out a bugle and quickly get a response. The excitement of these moments are comparable to few things in life. Delivering your first born, or maybe winning the lottery or the Super Bowl. Again, only an elk hunter can relate.

As I run to close distance on this elk I see about 10 elk filing through the woods. Most of them are bulls. I quickly set up on the downhill side of a ridge and call. The bull responds and is only about 50 yards out but won’t come in. I call again and know from the response he’s not coming. He’s just not that fired up. I can hear him raking a tree, more of a habit than a “I’m sharpening my sword to come to war”. I climb to the top just high enough to peek over and see that he is just over the ridge. I set my “Spirit” on my backpack and crawl to some knocked down trees while he’s raking. 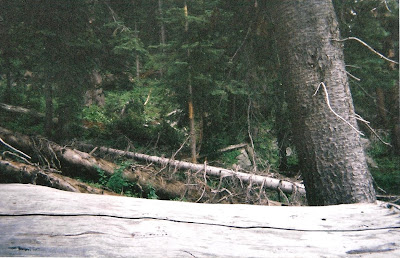 Once I am in my position, I know it’s pretty much over for this elk. I have two trees in front of me that I crawled to, and the way they have laid down, I can see through them without giving away my position. I wait for the bull to put his head down to rake and I stood up. Full draw with the bull completely unaware of what’s about to happen. I release the arrow and the shot feels as good as any I have ever taken. The arrow finds its mark and the bull tears away. I quickly call and stop the bull at about thirty yards. As he looks back to try and figure out where the bull that just gored him came from, I send another arrow through space and hit him far back in the body. He tears off again only to be stopped a third time by my call. I know from the very first shot he is dead. I sent the second arrow for insurance and know a third is unnecessary. The bull takes a couple more steps downhill and out of site, I hear him crash.

All the commotion has brought in a 5 X 5 who quickly inspects the dying bull. When he figures something is wrong he turns and runs right towards me stopping less then twenty yards from me. We both look down the hill towards the expiring bull for about five minutes until the wind brings my scent to the young bull.

The 60 yard blood trail leading to my bull could be followed by a blind man. The Snuffers have done their job. I find my bull piled up exactly where I assumed he would be. Quickly I realize I have taken this great bull with a longbow. The sense of pride was great, and the conversion to a true primitive weapon was now etched in stone. I had now done something all my own. I had challenged myself to use a primitive weapon to take an all magical elk. 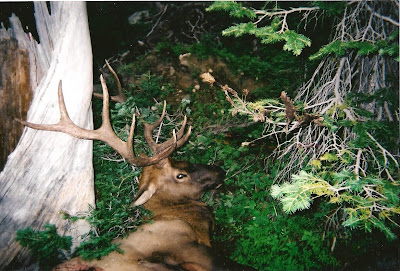 My first traditional elk was now the new beginning of an old way of doing things. My dad was very proud, and just possibly a bit humbled. I have even converted him to use a longbow. I gave him my Spirit bow, and had a gorgeous takedown Rampart custom made for myself. As far as the old way of complicated neon sights, stabilizer bars and all the other bells and whistles of a compound go, when I hear the words “elk Hunting” I think of a challenge. The challenge of putting yourself against once of God’s most magnificent creatures. I believe in challenge yourself to see what you can accomplish. After all, your thoughts and feelings may change next time someone says those magic words “Elk Hunting”.

Gear: This story makes me thankful for my Bryan Holley Spirit longbow. The bow I bought was 48 @ 28, not a lot of weight to pull, which I think helped my confidence in shooting a longbow. The Spirit bow was also an affordable brand new bow. At $400 I was very happy with my investment, that has now become a family heirloom. This bow has birdseye maple limbs and a cocobolo riser. Although the draw weight isn’t that much, this bow had no problem putting a large 175 grain Snuffer deep into the elk. I recommend Brian Holly bows to anyone interested in getting into traditional hunting.
Email ThisBlogThis!Share to TwitterShare to FacebookShare to Pinterest