Danny spent the first two weeks of the season working his butt off without hardly a sniff at an elk. It was an odd beginning to the year. So a few weeks into the season Danny and Kelly packed in seven miles. They set up a base camp in a fairly central location and then spiked out a couple of miles from there. They wanted the option to be able to restock on supplies and then head to a different location if they could not find the elk.

Ten years ago my brother-in-law, Kelly, used to tease me for getting so excited about hunting (elk hunting in particular). If you are reading this blog and you are a hunter then you know why we do it, which is what I told Kelly. I said, "You oughta come with us, you will not be bored and it will be one of the hardest things you've ever done". Well fast forward to present day, and Kelly is as excited about September as any of us. He's turning into a great elk hunting partner too.

Our elk hunting buddy, Del, hiked up on his own and was also hunting the same general area. Del is a lone wolf and even though he makes a great partner, he has his own hunting method that is really only applicable to a single guy hunting alone. With Del's llamas at base camp it didn't matter where they killed an elk.

Danny and Kelly hit the motherload. Three or four big herds came together in the same wide drainage. We've hunted this drainage a lot, it has become one of our favorite elk hunting areas, anywhere! Danny had a great idea on the movements of the elk and he knew where to position himself in order to be the most effective. 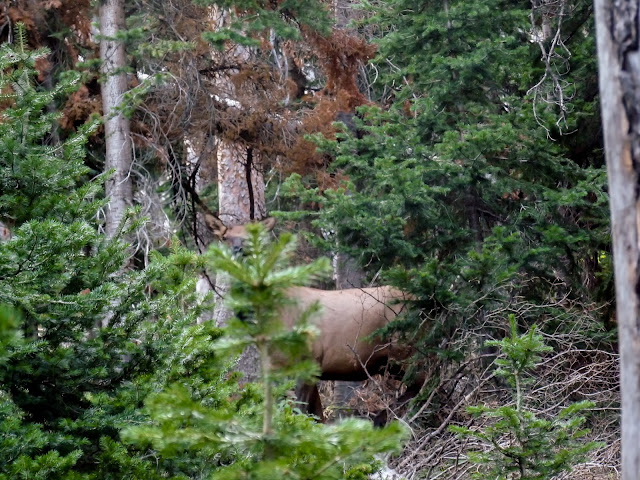 With elk screaming in every direction and hardly a ten second window without a bugle in the air the guys were able to pick the elk that best suited the wind. Working their way to the head of the drainage Danny locked-on to a bull who was responding to every cow call he made. Kelly slipped forward as Danny kept calling and moving around behind him. Kelly made a great quartering away shot. 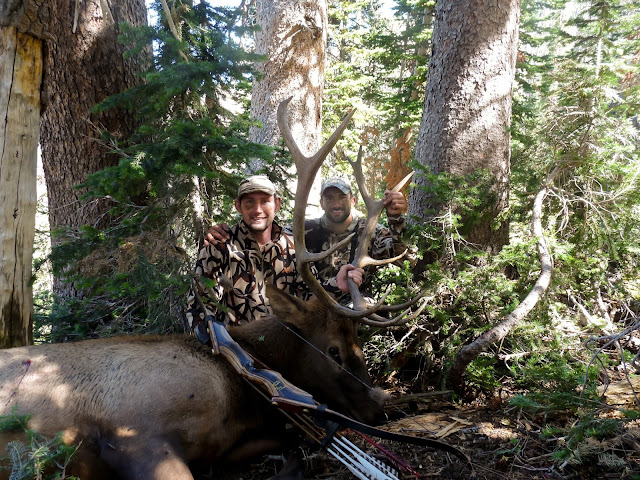 Danny and Kelly spent the rest of the day getting Kelly's bull cut up and hung up. They stored the meat on a shady hillside so that they could continue hunting. The first night in the drainage the guys could hardly sleep because of all the bugling throughout the night. But the next night was silent. The elk move great distances in these mountains on a daily basis, and just because one mountain is hot one day, it doesn't mean anything about what might happen the next.

Danny and Kelly snuck their way onto a bench that sat at the top third of the drainage. As they were still hunting their way through they spotted a small bull ahead. Danny took out an arrow and crept towards the bull. Kelly was behind him and unsure of whether or not he should call. He decided to throw a bugle out to see what happened.

Danny had been within distance of a couple of very large bulls on this trip, including one that would be a huge bull in any unit in Colorado. Danny was really debating about whether or not to try for this small bull. But flashbacks of the previous two weeks of hunting kept flooding his mind. Day after day of long, hard, hot hikes without even seeing fur. The debate was settled, kill the bull in hand.

Up ahead, and out of sight from Kelly, Danny was desperately hoping that Kelly would call. He couldn't go any further without running out of cover. Kelly's bugle garnered an immediate response from the small bull. The bull started working towards the call but he wasn't too sure about what he wanted to do, and he had yet to give Danny an appropriate shot angle. Kelly grabbed a big branch and started to lightly rake a tree. He didn't want to scare off the young bull by intimidating him too much. Well, Kelly played it just right. The bull was officially committed to seeing who/what was making that noise. As the bull snuck towards Kelly he walked into a shooting lane. Danny was already waiting for him at full draw. 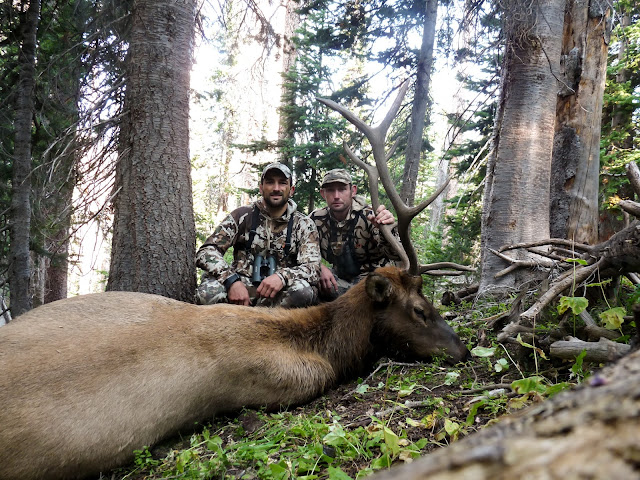 The guys took care of Dan's bull and hiked out to base camp that night. They were praying that Del didn't take an elk out with two of the llamas and leave them at the trailhead. Danny and Kelly were very happy to pop over the hill and see four happy llamas. At camp they found a few charcoal scribbled notes on pieces of bark. Del had as much action as they had, and had to go home a little early. Del might have ran out of arrows, but he did leave a half a cow for the guys to pack out for him, which they were happy to do. 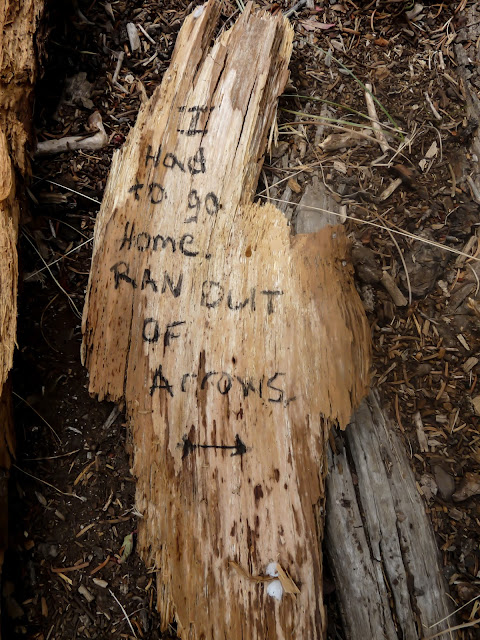 Danny and Kelly got up early the next morning, dropped into the drainage they were hunting, packed up the two bulls, hiked out to base camp, packed up camp, and hiked out to the truck. It was a long and very rewarding day. 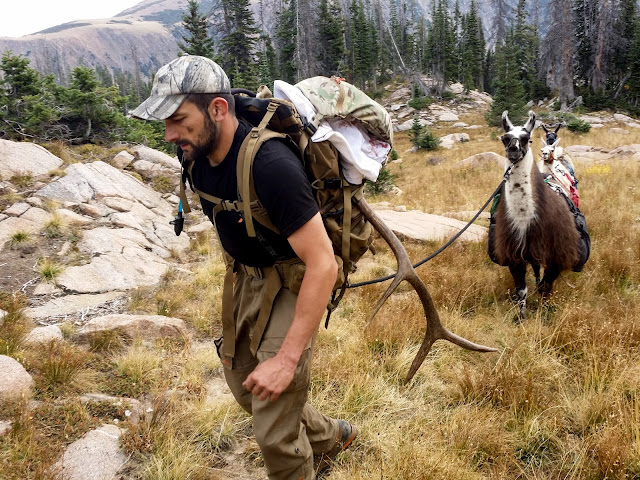 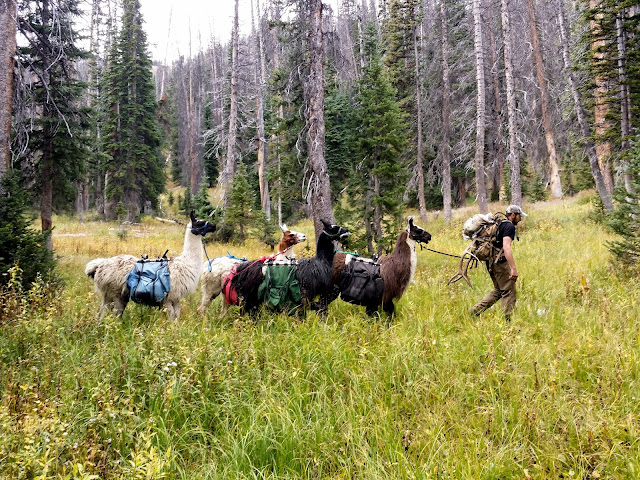 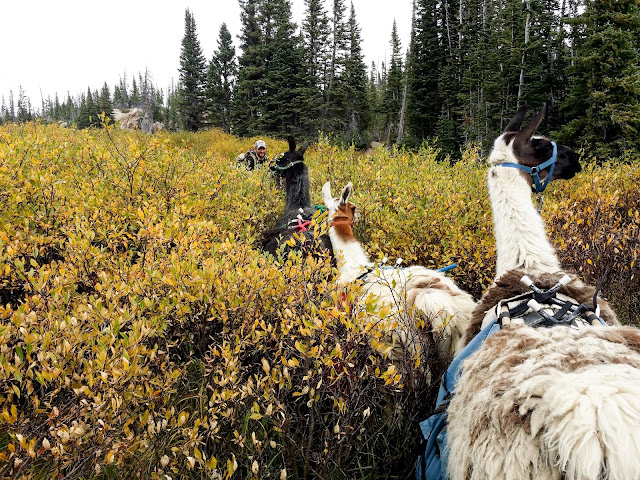 The elk had gone silent by the time my Dad and I returned to the same area, four days later. We had a close encounter with a real nice bull. The elk was under 20 yards for about ten minutes and miraculously never offered either of us a shot. But that was about it. The elk shut up and disappeared.