Here in western Nebraska the Cardinals have begun to sing. Every year the arrival of cardinals gets my blood pumping as they remind me that turkey season is near. Since I am lucky enough to spend quite a bit of time watching and hunting turkeys I thought I would submit a blog about the pros and cons of early turkey season. This blog may be beneficial for first time turkey hunters and for the customers of the shop planning to hunt early season in Western Nebraska or Kansas.

The first thing to realize is that the turkeys will most likely still be in large wintering flocks for the first week or two of bow season. This varies from year to year and is dependent upon the weather. Last year the turkeys did not leave their primary wintering area until the second week of the season where I hunt. There was not a turkey to be seen in one of my prime "opening weekend" spots. Two years ago Tommy and I had 5 shots opening morning at the same place. Some scouting a day or two in advance will greatly enhance your chances. 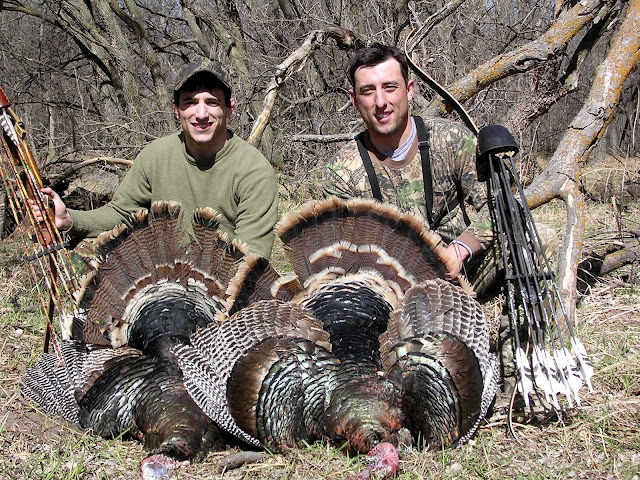 Past opening weekend success for Chad and Tommy


Expect to find very large groups of hens with a couple toms mixed in. The majority of jakes and toms will be in separate flocks away from the hens. Usually around the end of March some toms will begin to intermingle with the hens, but many will remain in bachelor groups. I have often seen large groups of jakes together for the first three weeks of the season. Though they are in separate groups during the day, most of the time the hens jakes and toms will all roost in the same general area.

The turkeys will be just beginning to search out new food sources, further from their wintering grounds, which have most likely been depleted. If you know where the turkeys winter you will have a good idea where to start looking, they will not be far from where you saw them during late deer season.

Early season I look for corn and bean fields which still have some feed available. The edges of feedlots and winter wheat fields are also good places to look for feeding turkeys early in the morning. Later in the season turkey food sources really expand and the feeding areas are more difficult to pattern. During the early season the turkeys follow a more set pattern and are very easy to ambush.

I generally don’t like to set up right on the roost, especially in the evening, if I plan to hunt the same turkeys for more than one day. The turkeys tend to fly down from the roost, go to feed, and then they find a secluded loafing area to spend most of the day. I have seen turkeys travel 1/4 to 1/2 mile or more to their loafing area after they feed. On wide wooded river bottoms with cover they tend to loaf in thick heavily wooded areas. In areas along creek bottoms with sparse cover the turkeys loaf on open hills, away from roads and often a good distance from the creek bottom. Transition areas between the food sources and loafing areas are a great place to ambush the turkeys. By not hunting the roost and not disturbing the primary feeding area you will ensure at least a couple days hunting the same flock in the same pattern. If you only have one day, set up right on the food source before daylight and just outside of sight of the roost if possible. 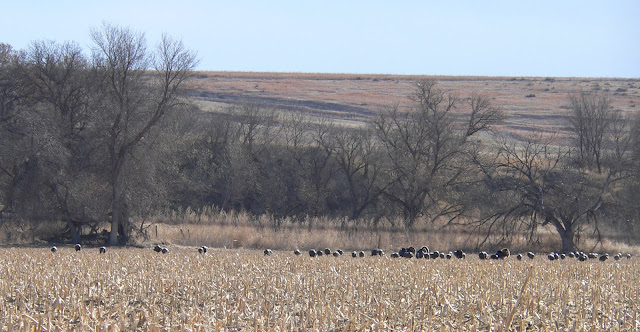 See those fans mixed in with all the hens? These toms were not callable, though the flock did
walk past our blind this day, which was placed in between the turkeys feeding area (the corn field)
and their loafing area (the wide open hills).

Generally there will be a small number of toms within a large group of hens. Expect those toms to be difficult to call in. If you don’t ambush them there is little chance of getting those birds. The smaller groups of rogue jakes and toms are a great early season target. They are not fired up yet  but be patient. Many times it has taken several hours to call a group in. Keep after them, they almost always come, maybe just out of curiosity. It will not be as easy to locate these smaller groups of birds as they seem to be less predictable, but it is worth the effort. 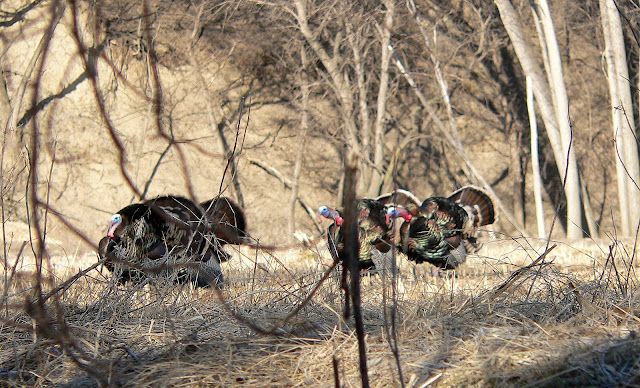 On an exceptionally good opening day we were able to call in group after group of toms. After being within earshot of the main group of turkeys, the toms finally came to investigate our calling. It took them three hours to finally come in. This morning seemed to be a bust at first, but turned out to be one of the best days of hunting I've ever experienced. You never know what you might get, especially with good weather.

Hens can be extremely vocal this time of the year. I have often had success by making A LOT of noise, which has brought in the hens, who in turn bring in the toms. Be careful doing this though, and let the situation dictate the amount of your calling. That much calling can just as easily move the turkeys the other way. If hens are responsive then calling to them can sometimes be a good idea. 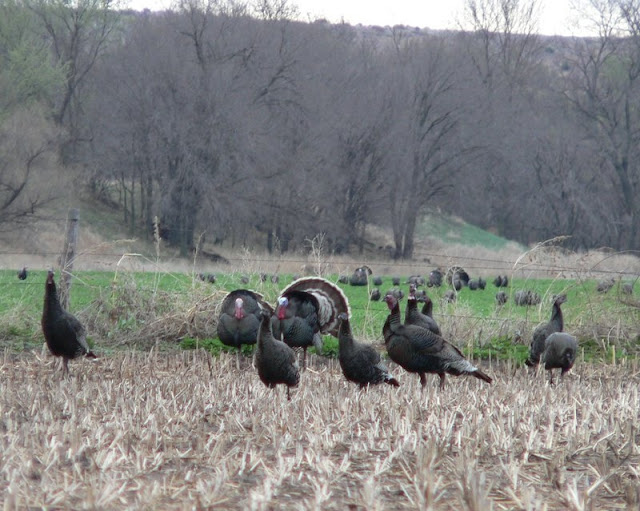 This small group of hens came charging in to our calls and two toms followed them, away from the main group. Tom Sr killed the bigger of the two this day.


Groups of jakes tend to travel around during the day, more so than the hens. Gobbling is mostly limited to early morning and dusk, so don’t plan to locate many birds gobbling during the mid day. Cover will be limited as the grasses and weeds have yet to come out of hibernation and the trees have not budded. This is to the hunter's advantage as turkeys stick out like a sore thumb, especially in the roost. Later in the season the turkeys will be much harder to find as they will be in small flocks and will be easily hidden by tall grasses, weeds and tree leaves. Even in early season your best weapon is a good pair of binoculars. Be sure to check the weather, cold rain really seems to limit turkey movements. I have seen turkeys sit in one place for 6-7 hours during cold rainy days. Extreme wind will play havoc on your blind, decoys and mutes out your calling. If you can only get away for one weekend I think it is best to wait for good weather, later in the season when the turkeys are more active.

1. No ticks or mosquitoes.

2. If you find birds you get to see lots of them. Big groups of turkeys are fun to just sit and watch.

3. The large flocks are easily located, there is minimal cover to hide birds.

4. There are large groups of jakes and young toms.

5. The birds are not quite as wary as they are later in the season.

1. Snow, rain and wind can ruin a hunt. Access can also be difficult.

2. The turkeys could still be in the wintering area and may not be in an area where you can hunt them yet.

3. Minimal gobbling – turkeys are not fired up.

4. It can be difficult to draw a gobbler away from the large groups of hens.

5. Once you bust the flock, you may be done for the day (or several days if it is at a roosting area).