Turkey season is still going strong and for some it is just about to get started. Below are a few more pictures of our recent success. This has been a good year for me.

Since I had already killed two birds this year I was going to let Danny shoot that morning. When he said he was going to hold out for a nice tom I brought my bow because I am NOT that picky!
After a little calling and having some hens within feet of our blind we spotted a tom behind us. We thought it was a jake because of its little beard, so Danny took the camera and I grabbed my bow.
Hunting in the mountains gives the turkeys an infinite amount of places to hide. If a wounded birds gets his wings he can be danged near impossible to find. So I decided to try out one of those Bullhead turkey broadheads. The results were devastating.
The tom gave me a 15+ yard shot and I hit him right above the caruncles. He started flapping and running off so we exited the blind immediately to chase him and shoot again if need be. We did NOT want to lose a bird in the mountains. The chase lasted about 75yds, he had expired, and bled A LOT. 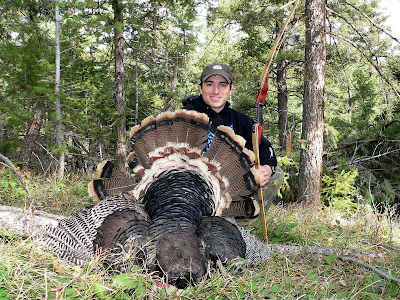 A short video f the hunt: 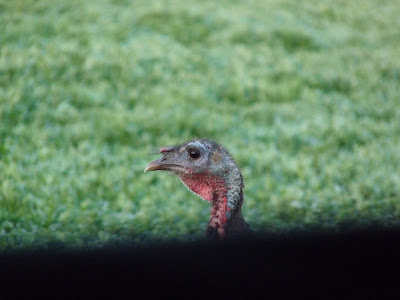 Took my brother-in-law on his first turkey hunt this past week. We went to a totally new place not really knowing what we would find. We were pleasantly surprised when we got there to find the birds were roosting a few fields away from camp. Some even roosted within 100 yds from camp. We also had along another friend who has turkey hunted but has never had any luck, and never with a bow.

Camp was nice, right along a creek in the timber. 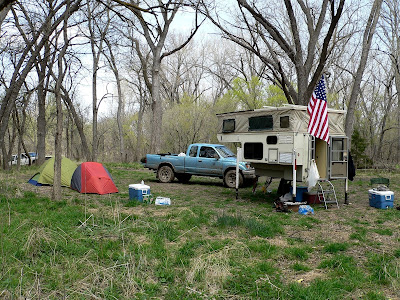 The first night was a bit of a scouting expedition but we still managed to get within ten yards of two really nice toms while still hunting. Didn't even come close to drawing the bow back though, they spotted me making the slightest of movements. I KNOW BETTER! Rookie mistake, but we found where they roosted and were going to back in the morning with the blind.

Next morning no less than 50 turkeys were absolutely going nuts on the roost. Of course the main flock headed the other direction, but we had these four young toms/jakes come to check us out.

My brother-in-law (Kelly) has become a danged good shot in the year that he's been in to archery, and I fully expected him to kill a bird. I didn't take into account what a little "turkey-fever" could do to a guy's shooting though. You can see a blur of yellow that was his arrow in this picture. He was about 4 inches in front of the turkey. DANG! 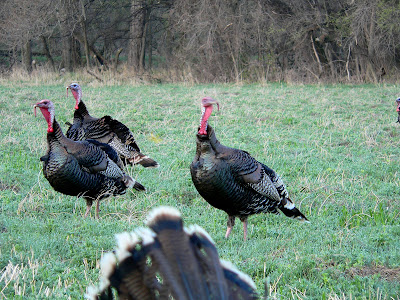 I had no intentions of being the shooter later that night but the only shot we had was out of one of the blind windows that Kelly could not shoot through. I one upped Kelly by shooting through the feathers of a young jake.

The next morning we moved closer to the roost hoping we could get more action, and boy did we. We had turkeys all around us all morning. We had talked a lot about where to shoot turkeys and how deceiving they can be with their feathers. Kelly shot at another tom and hit right where he was aiming, the problem was, there was only feathers there. Tough lesson learned, he didn't touch the bird's body.

Some more jakes came fast and we didn't have time to switch positions in the blind so I let an arrow fly at a small jake and shot him at the base of the neck. We held tight for a bit before going out and looking for arrows and a turkey.

While we were looking I saw my Dad walking towards us. I had no clue how his morning was going but I got a good idea when a turkey jumped out of a cedar tree and started to run with an arrow sticking out of him. The turkey was on the verge of death and we chased it a real short ways before we were able to shoot it again.

When we started looking for my bird we found a blood trail bigger than some deer that I've shot. We didn't have to follow it for long until Kelly spotted some tail feathers in the creek and pointed to my bird.

He had crawled into a little creek and up and under the bank. Amazing! Goes to show how it is so easy to lose a fatally hit turkey. They can hide so well. 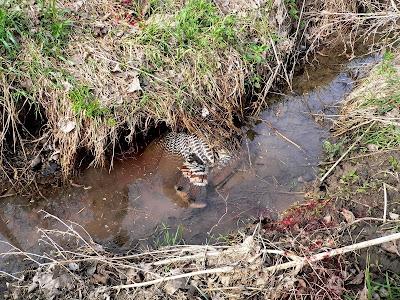 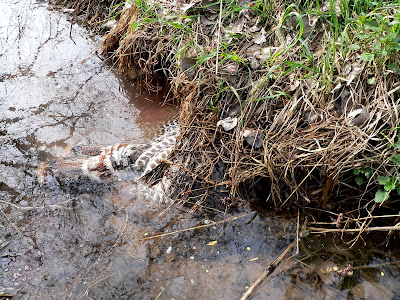 The four of us. In total my Dad got two jakes, John (far left) got one jake, and Kelly (the big dude middle left) got lots of feathers! 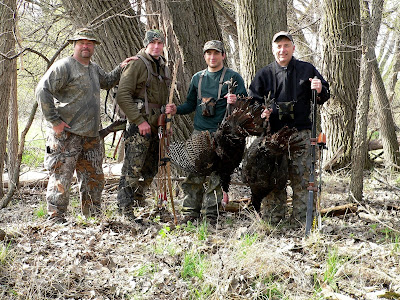